Judging by the tweets and retweets, Thursday’s first official HYPE Day was a huge hit!

The “Houston” reference came from NASA legend Capt. James Lovell, who was on campus to give the opening HYPE keynote address. He spoke that famous phrase on the Apollo 13 mission to the moon as the spaceship he was commanding experienced a near-catastrophic oxygen tank explosion two days after launch.

For over an hour, Lovell captivated hundreds of students as he recounted the harrowing moments that almost led to disaster.

Apollo 13’s crew had to abort its planned lunar landing mid-mission. Lovell explained that the explosion led to major obstacles such as limited electrical power, loss of cabin heat, a shortage of water and the crucial repairs that had to be made and tested in hours rather than months. Despite these complications, the crew returned safely, using a fragile lunar module designed for two astronauts and two days instead of the three crew members who took it back to Earth in four days.

First-year students were required to attend Lovell’s keynote followed by a series of interactive workshop sessions conducted by Heidelberg faculty and staff. Lovell himself even provided two sessions, “Up Close with Jim Lovell.” He said Apollo 13 was not another thrill adventure. “But it was a case of crisis management, good leadership combined with teamwork combined with initiative that turned an almost certain catastrophe into a successful recovery.”

Lovell’s keynote and the workshops were focused on collaboration, one of the six career-prep themes associated with HYPE. Teamwork and strong leadership are essential to collaboration, he said.

There are three types of people in the world: People who make things happen, people who watch things happen and people just wondering what happened.

If you’re part of a team, you’ve got to make things happen.

Lovell’s message hit home with ‘Berg students. Freshman Madison Flory had this to say after listening to his speech:

Hearing Captain Lovell speak was both interesting and inspirational. Getting to hear from someone who has experienced space flight was amazing! His account of the Apollo 13 trip was compelling and I enjoyed listening to him speak. I am glad I got to have this great experience at Heidelberg through the Hype program. 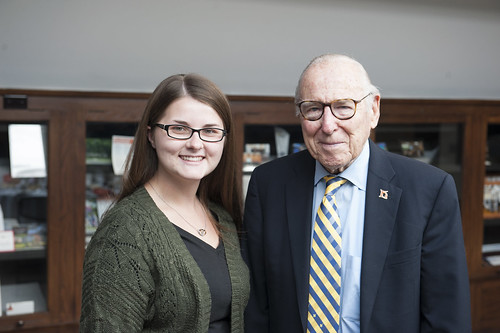