Deidre McVay, ’14, thought the she and boyfriend Taylor Schulmeister, ’13, were coming back to campus to celebrate the 95th anniversary of Alpha Phi Tau during Homecoming last weekend. The couple, along with alum Dennis LoConti, had taken the lead in organizing the event. Turns out Taylor was keeping a little secret.

On Saturday night in University Hall – home of the Aps’ hall – he popped the question to Deidre, and she said yes!

That was just one of many memorable moments that marked Homecoming 2016. Soon, Taylor and Deidre will join a special group of alumni spouses who met each other during their days on campus.

The Ap and Little Sisses reunion drew more than 100 alumni back to campus. Greeks gathered en masse during the football game to renew acquaintances and watch a thrilling ‘Berg victory over Muskingum. The Student Princes rallied to win in the last minute of the game, 27-24.

During the game, the first-ever Alumni Band joined about 40 current members of the Athletic Band to perform at half-time. Under the direction of Jon Waters, the two groups rehearsed just once in the morning before taking to the field. Every decade from the ‘50s to the 2000s were represented in the band, including Jim Gatchell, ’57, who was the oldest to perform with the band.

Alum Steve Hessler, '02, enjoyed the opportunity to relive his ‘Berg band days and was inspired by the energy and the direction of the band,

I enjoyed getting to play with the current band members, which includes three of my former band students from Bellevue, seeing alumni from my ‘Berg years and beyond and getting to perform on the other side of the sideline for the first time in almost 20 years.

Steve added, “I’m sure I speak for many band alumni when we say we are very proud of the band’s efforts this year and look forward to supporting them for years to come. There is a palpable enthusiasm among the current students, and as an alum, that is a great thing to see.”

That “palpable enthusiasm” that began with Pitchers with Professors and the annual Athletic Hall of Fame induction ceremony Friday night continued through the day Saturday with a variety of events for all ages. The annual Greek Sing was a hit again this year, with an added twist. For the first time, the event was a competition among the 10 Greek groups, with Sigma Tau Nu taking home the prize-winning paddle.

Alumni from the classes of 2006 and 2011 celebrated their 10th and fifth anniversaries with a get-together at a local club.

Congratulations to the softball team that received their championship rings during a ceremony at Frann’s Field, followed by the annual alumni softball game. Football, men's soccer and volleyball all defeated Muskingum on Saturday.

Congratulations also go to this year’s Homecoming king and queen, DeVaun Churchya of Fremont and Lindsey Marcum of Hamilton. 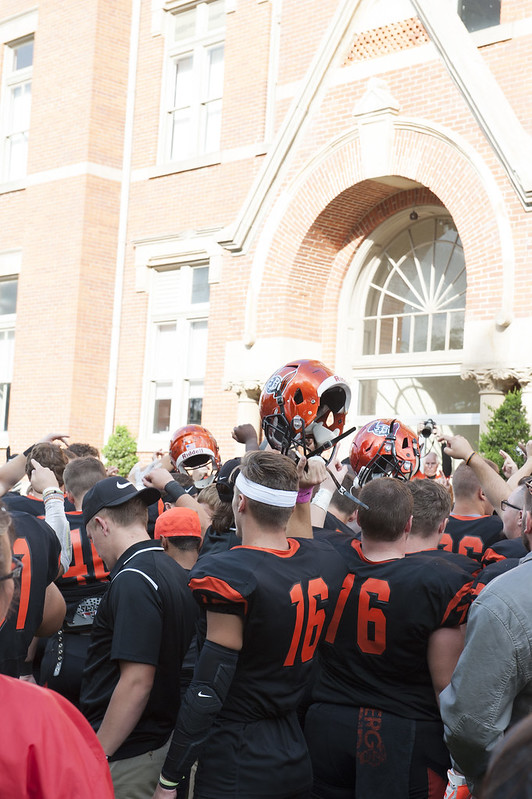