She’s a science nerd and she embraces it.

Most of Ashlie (Burkhart) Gowitzka’s family works in the medical or education fields, so when she became a biology teacher, she saw it as a “best of both worlds” decision – although there never really was any doubt she’d be a teacher.

“I wanted to be a teacher from the age of 6, and some great science educators that I had at Margaretta Local Schools influenced me in selecting science education pretty early on,” she says.

Today, Ashlie, an ’06 ’Berg grad is in her 14th year of teaching high school biology, the past 11 years at Perkins High School in Sandusky. A double major in Biology and Adolescent/Young Adult Education, she’s following in the footsteps of some great science educators as well as some stellar Heidelberg professors who helped shape her career.

“Each of them approached education differently and opened my eyes to what could be possible in my own classroom someday,” she says.

All of those teachers who influenced her would be so proud to learn that Ashlie was recently named the top biology teacher in Ohio by the National Association of Biology Teachers. The award annually recognizes middle and high school bio teachers in all 50 states and Washington, D.C., Canada, Puerto Rico and overseas territories. Recipients are judged on their “teaching ability and experience, cooperativeness in the school and community, and student-teacher relationships,” according to NABT’s website.

“Being nominated for the award was a surprise for me, and I was extremely honored to be selected,” she says. “Some really amazing biology teachers across the state have won this award, and to be grouped into the same category with them is truly 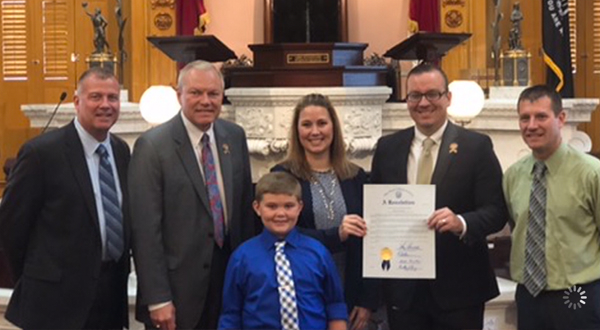 a humbling experience.” ’Berg alum Chris Monsour, ’99, a biology teacher at Tiffin Columbian High School and the regional director for NABT, presented Ashlie with a certificate in September. In November, she’ll travel to Chicago to attend the NABT Conference to receive her award along with the other state winners.

Part of Ashlie’s success is about going the extra mile to connect with students, not only in class but outside the classroom, too, and providing them with meaningful experiential learning experiences.

At Perkins, Ashlie serves as a co-advisor to the National Honor Society, coached soccer for four years and launched BioClub, which focuses primarily on the environmental impact in the region. She guides her students as they participate in shoreline clean-up events and recycling initiatives around their school. The club also hosts an annual science day for the district’s fifth-graders.

“We’ve also been privileged to work with OSU stone lab, NOAA and the Ohio Sea Grant as part of their Marine Debris & Plastic Reduction initiatives,” she explains. The students also are involved in helping former Perkins teacher and OBTA winner John Blakeman at the NASA Plum Brook Station with his ecological restoration efforts.

Finding her stride at the Berg

Like so many, Ashlie knew from the moment she set foot on campus as a high school senior that Heidelberg was the perfect fit for her and her career aspirations. Although a commuter, she still found ways to get involved with campus life, playing soccer her freshman year until she was sidelined by an injury.

“Because I was a dual major, I spent a lot of time in both the Biology and Education Departments,” she recalls.

From the science side, she cites the teaching of Dr. Bob Murray, Dr. Ken Baker and Dr. Susan Carty, all of whom are now retired as influential – “although I didn’t always have an appreciation for the classes when I took them (i.e. Botany).”

In education, Dr. Brian Haley, who still teaches at Heidelberg, Dr. Carl Stein, Dr. Herb Steffy and the late Dr. Ed Corley opened her eyes to the possibilities for her own classroom.

“I honestly have to attribute everything I know to them,” Ashlie says. “They were all tremendous professors who gave me a lot of tools to use in my own classroom.”

The evolution of a teacher

Among those tools was the importance of being flexible and open to personal growth and development. “The teacher I am now doesn’t even reflect the teacher that I was when I first started teaching,” she says. She has continually sought out useful professional development opportunities, and demonstrated a willingness to try new ideas and take risks.

“I don’t think that I’ve done anything exactly the same any of the years of my career.”

As the only female science teacher at her school, Ashlie hopes that she has inspired a few more girls to pursue science-related fields in their future.

Published in Alumni, The Sciences