The Heidelberg community is mourning the passing of William F. “Bill” Goodwin, ’56, retired Vice President for Development, who died June 3, 2019, in Sarasota, Florida.

Along with his wife, Norma (Fant), ’54, whom he met when both were students here, Bill held his alma mater in high esteem, visiting for class reunions and major events, and stepping up to help Heidelberg with some very important and visible capital projects.

Following his graduation from Dover High School, Bill enlisted in the U.S. Marine Corps. He enrolled at Heidelberg but was called away for military duty. He completed his military service as a staff sergeant and returned to Heidelberg, earning his bachelor’s degree in 1956.

While at Heidelberg, Bill was a member of the Excelsior Men’s Society and played football for the iconic Hall of Fame Coach Paul “The Fox” Hoernemann.

After working in life insurance and as an executive for the Boy Scouts of America, Bill returned to Heidelberg as Director of Alumni Relations in 1965. In 1976, he became Director of the Annual Fund and then Director of Development and Public Affairs. In 1984, he was promoted to Vice President of Development, retiring from Heidelberg in 1994 after 30 years of service. 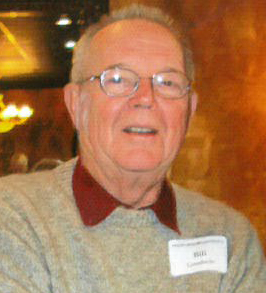 Together, Bill and Norma have been committed to supporting their alma mater for many years. They have been long-time members of the Fellows Organization at the Presidential level, and are members of the Heidelberg Heritage Society. They have also supported various Heidelberg projects and organizations, including the “H” Association, the Concert Choir tour, capital campaigns such as the Brenneman Music Hall renovation, the Williard Residence Hall reconstruction, and Strike Up the Bands. In recognition of their lifetime giving to Heidelberg, the Goodwins are members of the Colleagues Circle of the Builders & Benefactors organization.

In 2013, Bill “came out of retirement” on my request at a Florida alumni event to join his dear friend, Dr. Jim Getz, ’58, and co-lead a campaign of “Foxmen,” former players of the beloved Coach Hoernemann, to raise $1 million toward the construction and naming of Hoernemann Stadium. It was personally very rewarding for Bill and Jim to honor The Fox, and especially for Bill because Hoernemann was instrumental in persuading him to return to Heidelberg following his military service.

In 1994, Bill and Norma received the Alumni Citation and he received an honorary Doctor of Humane Letters degree in 2000.  He also was inducted into the Athletics Hall of Fame in 2001 for his contributions as an administrator and donor.

In addition to Norma, survivors include a son, Bill Jr., and several grandchildren and one great-grauddaughter.

President Rob Huntington reflected on his relationship with Bill, from his first time meeting he and Norma in July 2009 when they hosted a Heidelberg alumni picnic gathering at their home in Lakeside, Ohio.

“During the Q&A part of the evening after eating, I think Bill asked me something about my fundraising plans for his alma mater. He offered some suggestions too. They had already invited me to their Lakeside cottage for Sunday brunch the next morning. Norma’s food was outstanding!” he said.  The surprising fun highlight of that day was seeing Bill’s “Train Room” where he had built this huge train set with a village, mountains, streams and other things. “It was incredible! So was the discussion we had about his 30 years of fundraising at Heidelberg. Apparently, my answer was not very compelling the night before.”

President Huntington said he learned a great deal from Bill that day and in the years to follow at alumni gatherings on campus and in Florida. “One thing that I really respected about Bill was his directness. He never minced words or held back his opinion. On more than one occasion, he told me to speak less and make the main points clearer.  I keep trying, Bill,” he said.

The president also appreciated Bill’s tremendous passion for Heidelberg. “In his own energetic and forthright manner, I think that his fundraising philosophy boiled down to ‘sell the love for The Berg.’ I keep trying, Bill.”

Burial with full military honors took place on Monday, June 10, at the Sarasota National Cemetery.  A memorial service may be planned at a later date. The family suggests memorial gifts to the William F. Goodwin Scholarship to support Greek men and women at Heidelberg.