Two school searches, a demonstration for local elementary students, a bath and accompanying his partner on his daily shift with the Clyde Police Department. It’s all in a week’s work for Chase, the K-9 partner of Police Officer Tony Travagliante, ’09.

Travagliante and Chase, a 2-1/2 year old Belgian Malinois, are the first-ever K-9 unit for the Clyde PD, located in Sandusky County in northwest Ohio. Since they were activated as a unit in  ay 2018, they’ve gone on drug sweeps and other searches as well as appearing at community outreach activities. Clyde is a small community of about 6,300 people, yet it’s hardly immune from the influx of drugs on its ​streets. Concerned by what he was seeing, Travagliante sprang into action.

“We had an older chief who really didn’t see the need (for a K-9 unit),” he said. But the new chief, Monti Campbell, was open to the idea. Travagliante was able to persuade him. “I went to Monti with the idea, and he told me to figure out how to get the money.”

That’s just what Travagliante did. He knocked on doors of Clyde businesses, service organizations and individuals to ask for donations, gave presentations to the City Council and made all of the necessary contacts and connections. The community responded with almost $40,000 in donations, which covered the purchase of the dog, their training together, making modifications to a cruiser to accommodate Chase, and other equipment and supplies.

An eight-year veteran of the Clyde PD, Travagliante and another officer find themselves handling a lot more drug interdiction cases these days. During vehicle stops, even when they’re aware of the presence of drugs, their hands are tied without consent to search. But a K-9 handler can search the exterior of a vehicle by law without a driver’s consent.

“The only way we know for sure is if the dog indicates drugs. That’s automatic probable cause,” Travagliante explained. “Chase validates a lot of our findings.” 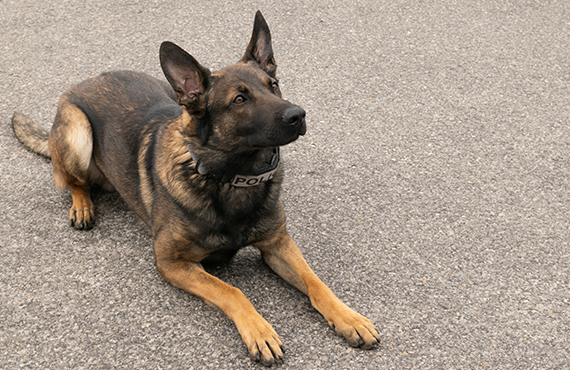 Travagliante knew the benefits a K-9 unit could bring to a community, not the least of which is improving public safety. He had gained valuable insights during his time as a ‘Berg undergrad when he was placed in an internship with Tiffin K-9 unit Officer Jake DeMonte and his partner, Tommy. An extension of his psychology major, the internship involved working with the local drug task force, the detective bureau and most importantly, the K-9 unit, which allowed him to hone in on the career he wanted. Because of this exposure, it seemed natural that Travagliante would pursue a K-9 as part of his work. “I’ve had dogs all my life,” he said. But the bond with Chase is something special; they are 100 percent in tune with each other. “He’s like a human. He has good days and bad days,” Travagliante said. “He loves to play, but with his high drive, he would work himself to death if I’d let him. That’s just his mentality.”

The pair is together 24/7. When their shift ends and they head for home. Chase is family. “No joke, I see him more than I see my wife and my child. We never have a day off.”

That’s the commitment they’ve made to each other and it’s the reason their bond is so strong. Serving as a handler for a K-9 is hard work, beginning with the intensive training that was 40 hours a week for six weeks. “The hardest thing to do as a handler is to trust your dog, and I trust him with my life,” Travagliante said.

Transitioning to a K-9 unit hasn’t always been easy, especially winning over some of the older officers. But it’s definitely been worthwhile. The community has responded positively, too. It certainly didn’t hurt that Travagliante involved them in choosing Chase’s name.

“It’s gotten to the point that everyone knows us. Kids know us. Parents know us. Even drug users know us,” he said.

His peers have taken note, too. For the past two years, Travagliante has been named Police Officer of the Year in his community, recognition voted upon by his fellow officers.

As Chase continues his work to help sniff out illegal drugs on the streets of Clyde, he’s become somewhat of a folk hero. He even has his own Facebook page. Together, Travagliante and Chase have had such a positive impact in the community that the Police Department has added a second K-9 unit to its ranks. The hope is that the K-9s deter drug users and dealers, and in their own way, bring the community together.