“I can clearly remember my walk from Krieg Hall to the cafeteria. I had such a great time at Heidelberg. Campus has changed so much since then.”

It’s been 28 years since Star* Cunningham, ’90, was handed her college diploma. And she has changed a lot herself. Since her time at Heidelberg, she’s worked for global corporations BP and IBM, she’s traveled the world, she’s been featured in Vanity Fair, and she has added founder, entrepreneur and CEO to her list of job titles. Through it all, she’s struggled through personal battles, defied society stereotypes and made the leap of faith to believe she could change the world – emerging as a powerful role model and successful businesswoman.

“I knew I was entering a tough field as a woman and a woman of color, but I heard the message from my professors so often that ‘We need people like you in computer science’ that I internalized it. It has made all the difference in the world for me.”

I knew this would be something I was good at.

Cunningham grew up in Cleveland and went to an all-girls school that introduced her to technology at an early age. She sheepishly admits she didn’t apply herself completely in high school, but turned it around when she found her passion for technology. She chose Heidelberg for the computer science major, and also because she would be able to work in the computer center – a valuable experience in her mind.

“Heidelberg was really a pioneer at the time,” she said. “Not many schools were offering a computer science major, and Heidelberg had the strongest curriculum.”

At Heidelberg, she thrived under the influence of professors like Edith Churchman, Leanne Wolff, George Adams and Kurt Huenemann. The latter two were especially encouraging and supportive of Cunningham in the computer science department.

“They made sure I knew they were there to help,” she said. “I don’t have peers that had that kind of relationship with their professors. As a woman in computers in the ’80s, it was such an amazing start.”

Heidelberg taught her coding languages and skills, but also about the industry, which at the time was just developing and had a lot of people feeling skeptical.

“My parents asked me what my backup plan was,” she said, laughing. “So I added a major in business administration.”

That ended up being a fortuitous decision. Cunningham knew she wanted to work with computers, but not necessarily become a programmer. Her first job was at British Petroleum, and she said she wanted to “walk around, find a problem and fix it with technology.” They let her.

“I knew this would be something I was good at,” she said. “I knew and understood technology and wanted to apply it to business problems.”

That confidence and problem-solving mindset is what set her along a path toward success.

After leaving BP, Cunningham earned her MBA from Northwestern University’s Kellogg School of Management. She decided she wanted to look for a position that was global in scope. She found IBM and became a part of its Global Smarter Planet Solutions Team. IBM offered her opportunities to travel all over the world, working with telecommunications, artificial intelligence, machine learning and Watson before it was called Watson.

“Computers are like math. It’s the same everywhere,” she said.

She was part of the task force that had to figure out how to provide infrastructure, technology, resources and services for large-scale events. It was a complex job that required research, teamwork and an understanding of cutting-edge technology. She believes her background in programming helped her see things through.

“You need to stick with it to make it work. It has to be exact to work,” she said. “I learned to be patient enough to work with the technology to get the result I wanted.”

Her global travels gave her a tolerance and respect for other people as she learned about new cultures. However, it also opened her eyes to the disparity of quality healthcare. And she knew of its importance.

Cunningham has Crohn’s disease, a chronic inflammatory disease that affects the lining of the digestive tract. During college, she spent several months in the hospital, had surgeries, took medications, but knew this  as something she’d have to manage the rest of her life. The more time she spent traveling, the more she thought about ways to solve the problem.

Then she had a revelation about technology’s intersection with healthcare.

“I could see the problems with the system. I realized it would be a dereliction of duty if I didn’t start my own company to help.”

Cunningham was well-educated, had great insurance and was engaged with her healthcare, but still struggled with the obstacles and inefficiencies of the healthcare system. She realized this was a place she could make a difference because she not only recognized the problem, but she also had the right skills to help solve it.

She’d spent her career using technology to solve problems. Now she was going to make it personal.

“I was a person with health issues and experience with technology. Healthcare needs more technology, so who better than me? When better than now?” she said.

In 2012, Cunningham became the founder and CEO of 4D Healthware – a digital platform that tracks chronic conditions. The software provides remote patient management and monitoring services through Bluetooth devices that can track hydration levels, blood pressure, sugar levels, temperature – and sends reports and/or alerts to 4D Healthware’s clinician, or Patient Engagement Advisor. If necessary, the patient's doctor will be
brought in to assist.

“This software has the ability to affect thousands of people. It never gets tired, it shows up every day and it always has the answer,” she said.

The software ingests the data, and through artificial intelligence, can engage with the data and recognize patterns. Medicare classifies the solution as an extension of the clinic, meaning healthcare providers can work with 4D Healthware to improve patient care.

“The idea is that it is less expensive to keep people healthy than to treat them once they’re sick,” she said.

Cunningham’s timing was perfect. Healthcare in the United States is moving from a fee-for-service model to a value-based reimbursement model. In the current model, scheduling tests and visits are incentivized. The  new model is focused on outcomes, so healthcare providers benefit when patients get better.

This is a big shift in the industry, and it’s being driven by Medicare, which is requiring that 80 percent of reimbursements be value-based by 2020. This means, healthcare providers will be financially impacted by patient readmissions. It’s in their best interest to get patients healthy. In a time where more and more people want to be connected with their own healthcare, 4D Healthware is the perfect solution to helping doctors, patients and caregivers.

“As healthcare costs have risen, so has consumer involvement,” she said. “4D Healthware gives them more knowledge and that is powerful.”

“I’m motivated by helping people have access to tools they need to live their best life,” she said. “You will pound a nail with a shoe until someone gives you a hammer.”

Cunningham believes a better, healthier world is possible, and she’s on a mission to see it as a reality. 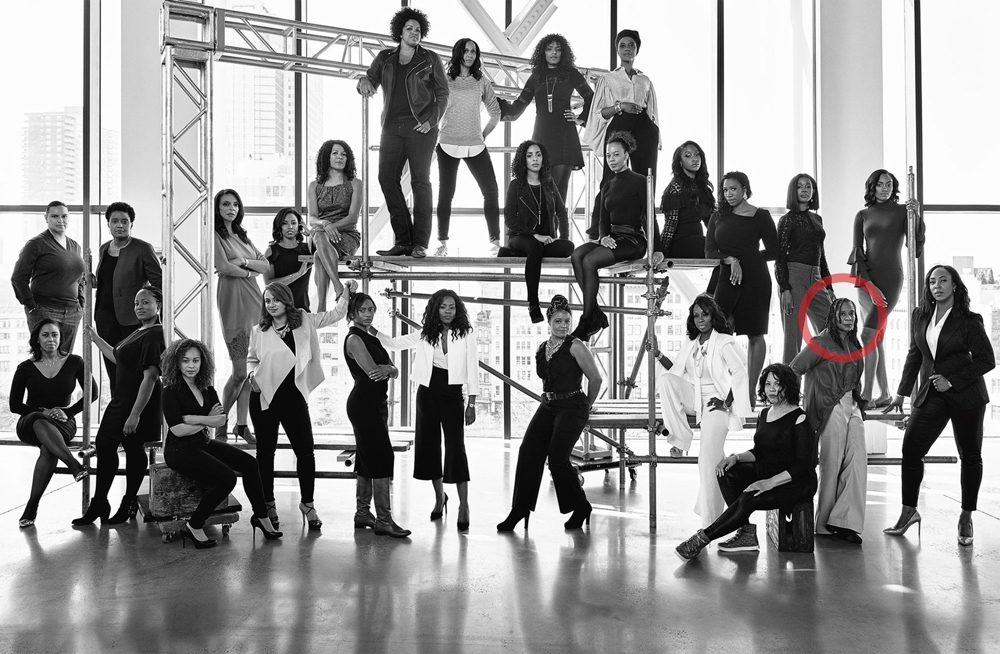 You don’t have to look like Bill, Jeff or Mark.

Some people thought Cunningham was crazy for leaving an executive position at IBM to become an entrepreneur, but she knew it was the right thing to do.

“There are problems with healthcare access all over the world,” she said. “People don’t even know what they need until they see it.”

While 50 percent of new businesses fail within their first five years, 4D Healthware is finishing its sixth year and still going strong. Cunningham’s success found her included in a Vanity Fair article that featured women-of-color entrepreneurs who had secured over $1.5 million in investments. She traveled to New York for the photoshoot and to meet the other 25 women.

“It was an emotional experience. When you’re a woman of color and you embark on an entrepreneurial journey, you don’t have a lot of support,” she said.

The business world, and tech companies, have long been dominated by white males. Cunningham feels proud to be a part of the group that is shattering expectations and the glass ceiling in a variety of industries.

“We could all feel the shift of what an entrepreneur looks like,” she said. “You can own a multi-million-dollar tech company and not look like Bill, Jeff and Mark. You can look like me.”

You can do this too.

Cunningham looks forward to a time when diseases become preventable and everyone has access to the healthcare they need. Her work with 4D Healthware will continue to build a bridge between patients and  providers. And her generous spirit and powerful story will inspire a whole generation of girls.