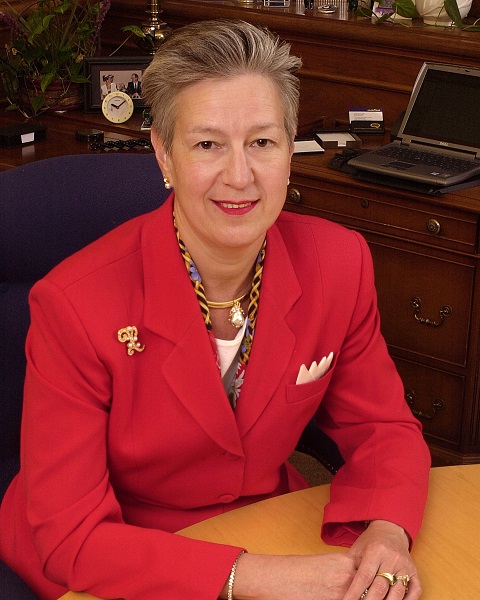 Growing up in Akron, there was no way that Kathleen (Tirbovich) Geier, '78, was going to follow numerous family members to a career in the rubber industry. But unexpected opportunities have a way of altering things.

Geier worked three jobs while taking 20 credit hours as a double major in psychology and biology. As graduation neared in 1978, she was unsure of her next step. “I had quite a bit of angst over it. I thought about going to grad school in psychology and also flirted with the idea of a medical field,” Geier said. Then, a wise biology professor stepped in.

That professor – Dr. George Barlow – encouraged her to pursue a job interview with Goodyear Tire & Rubber Co. She was hired for a personal training position at a Goodyear plant in Alabama. That job was the launching pad for an exceedingly successful and productive 30-year career as one of the highest ranking executives for Goodyear’s Global Human Resources division.

For the first seven years of her career, Geier held various HR positions in Alabama, Iowa and Ohio. It was an interesting time, she recalls, with few if any women in salaried management positions.

In 1986, she became plant manager at a Goodyear subsidiary in Hannibal, Missouri, overseeing 50 employees. While there, Geier implemented self-directed work groups – employees operating without supervision. Productivity increased by 61 percent and sales by 43 percent. That was a foretelling of what was to come.

Five promotions later, by 1999, Geier had become director of human resources for Eastern Europe, Africa and the Middle East for Goodyear Dunlop in Brussels, Belgium. Named senior vice president of Global human Resources in 2002, Geier had reached the pinnacle of her career as the top HR leader for an enormously complex, multi-billion-dollar company, focusing on compensation issues, succession planning and recruitment. She was instrumental in orchestrating all of the HR functions during a dynamic corporate turnaround.

As her career at Goodyear unfolded, Geier dealt with the typical challenges of working in a highly male-dominated field. She often found herself in charge of people much older with many more years of service. She even had to manage peers. Her guiding principles for navigating these challenges: manage by the Golden Rule and maintain an attitude of empathy.

“A good supervisor will drill down and figure out what motivates people,” she said. “And that takes a lot of listening.”

Reflecting on her indecisive days as a ‘Berg undergrad, Geier never would have thought she’d land in such a high-profile leadership position. She credits her exposure to the unlimited opportunities at Heidelberg for opening her mind to unexpected opportunities. She encourages today’s students to do the same. “You can sleep later,” she said.

Although she retired in 2008, Geier has barely slowed down. In addition to consulting and board work, she joined Heidelberg’s Board of Trustees in 2010, becoming chair in June 2017. Based on her resumé, few are more uniquely qualified to lead the Heidelberg organization.