It’s Friday morning. Hannah Long-Higgins, ’15, is on her way to work in the nation’s Capital. “I’m back in the office for a couple weeks now,” she pauses, breathing a sigh of relief with a laugh. “Wow, that feels great to finally say.” Having just returned from the West Coast and then Atlanta, the video journalist for the BBC is now settling into her second year in Washington, D.C.

Discovering her love of photography at an early age, an investment came at age 14 from her parents (and Heidelberg graduates), David and Elizabeth, ‘84. “My parents noticed I had a potential for photography so they really helped me flex my entrepreneurial muscles,” Long-Higgins said. They funded half of her first camera to take her brother Andrew’s senior pictures. While her love of photography would blossom with the
start of her “business,” she never considered it to be a career option. 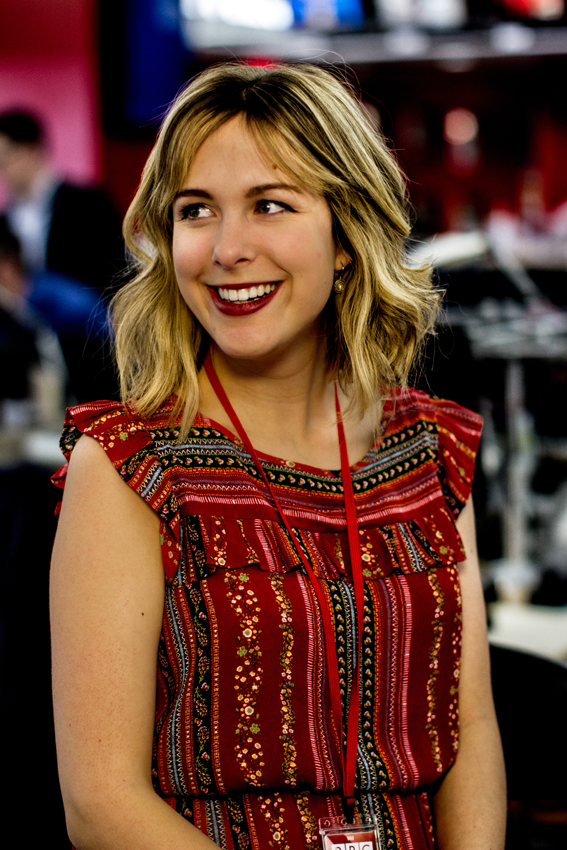 As an English and International Studies major at Heidelberg who didn't have a clear path to her future career, Long-Higgins accepted an internship after graduating as part of the Justice Leadership Program. “I moved to Seattle and lived in a church,” she said. “I wanted to experience the world with my classes being in the real world.” Interning with a labor union, she interviewed hotel workers about the current housing situation in the Northwest.

“You don’t actually think about the people in the hotels,” she said. “How are these people able to make ends meet when affordable housing isn’t matching the city’s increasing value?” Always thinking proactively, she pitched her photography to create spotlights of each worker she interviewed. She was given the green light, which led to the creation of her WordPress blog, in the style of Humans of New York, A More Hospitable Seattle, which is still active to this day.

Still unsure of her future career plans, Long-Higgins attended the Graduate School Fair at Seattle University. Andrew encouraged her to check out his current school at the fair, Columbia University of New York City. The adjacent table was occupied by the Columbia School of Journalism. Intrigued, she struck up a casual conversation which would lead to a line she would never forget:

“We’re just looking for great writers who want to tell stories.” The lightbulb went off. Journalism.

Again at the encouragement of her brother, she applied to the Columbia School of Journalism. The application process required her to take a facilitated test at the house of an alum in the area. “We just hit it off,” Long-Higgins remembered. “We both spent time in Germany, I had as part of the American Junior Year program at Heidelberg.” The woman encouraged her to apply and reapply until she was accepted, convinced it was the right place for her.

“The test was actually fun and I remember thinking in my head, ‘Hannah, you’re such a nerd,” she said with a laugh. “If it’s not fun and I don’t get energy out of it, it’s not for me.” The only problem with the previous
advice is that she would not need more than one application. She was accepted and enrolled in the fall of 2016.

Long-Higgins earned her master’s degree in the one-year program at Columbia. “I felt I really found my place in the industry that year. Everything came together with my international experience at Heidelberg, my writing background and everything just clicked.”

After earning her master’s, she applied for a fellowship with the BBC. In a whirlwind, she would first spend time in the Middle East, in Jordan.

Her application was approved for the Davis Project for Peace grant. Along with Noor, her friend from journalism school and native of Jordan, they proposed to teach basic reporting to refugees working to document their own stories about life in the Zaatari refugee camp. The Davis Project for Peace supports and encourages today’s motivated youth to create and test their own ideas for building peace. Noor worked on reporting the U.S. funding cuts for Jordan refugee camps while Long-Higgins did the photography work for the stories.

“(Jordan) was such an intense experience but a good one,” she remembered. “I saw babies come into this world in a refugee camp. At this point, nothing shocks me. I’m really drawn to the human experience.”

She returned from Jordan to begin her fellowship with the BBC for six months. She stayed on after the conclusion as a video journalist, working out of the Washington, D.C., bureau. This year marks the start of her second year there. “I’ve been in a different city every year since graduating, so it’ll be nice to have some familiarity for the second year.”

Producing stories on everything from election coverage to drug epidemics, one particular story stands out about an ex-Marine who fired shots at a mosque in Connecticut in 2015. Leaders of the mosque invited the man to meet to understand their religion and teachings better, eventually offering forgiveness. Both sides have now become close because of the incident. “It’s so powerful when people from opposite sides come together,” she said. “Those are the stories I look for. People do change.”

The ability and the opportunity to produce creative pieces for the BBC have boosted Long-Higgins’ confidence to new heights. Whether it's telling stories through video, audio, or photography, the "one-woman band” truly has the sky as her limit. ”I love what I do and I’m fortunate to be able to say that.”

The Past, Present, and Future of Armenian Genocide Remembrance