Jason Maus, ’02, spent the majority of his time at Heidelberg doing three things – studying business, running and building relationships – and it’s these three things that have proved indispensable for his success.

Like many students, Maus discovered Heidelberg through the recruitment process. He was interested in pursuing finance and management. He also wanted to run. Heidelberg felt like a good fit for both, so he became a business administration major and joined the cross country and track and field teams, which made him a three-sport athlete who competed year round. This created a constant demand to balance academics and training.

“Time management and organization were important, but I also really enjoyed my classes so they didn’t feel onerous,” Maus said. “With practices and meets, I had to get things done ahead of time, but I had good teammates who were just as motivated academically.”

From that motivation and dedication came great results. Maus has the 10th fastest cross country time in school history and competed on Heidelberg’s nationally qualifying team that earned a 17th place in the country. He still holds two Heidelberg records as part of the indoor 4x800 meter relay and the outdoor distance medley relay. In 2010, Maus was inducted into Heidelberg’s Hall of Fame as part of both the 1998 cross country team and 1999 track and field team, which were the first teams in those sports to win OAC championships for Heidelberg.

His academic success mirrored his athletic success. Throughout his four years, Maus earned academic honors in both cross country and track and field seasons. He is a Clyde Lamb award winner and one of Heidelberg’s 20 CoSIDA Academic All-Americans. He was a member of the Pre-Law Club, the "H" Association, Tau Pi Phi Business Honorary and the Heidelberg Honor Society.

When graduation arrived, he had several job offers. While he was deciding, he was approached by the head track and field coach from Ohio Northern University about a graduate assistant position.

“I thought it would be a good way to pay for my MBA and be able to stay with my sport a little longer, so I took the job,” he said. “The idea of becoming a coach didn’t hit me until I was already in the environment. I had every intention of heading into the finance and banking world after my MBA, but this is a difficult sport to get out of.”

“There are always new challenges and problems to solve. It’s everchanging,” he said. “It’s one thing to look at a situation and have an opinion and another to be sitting behind the desk and have to make the decision.” 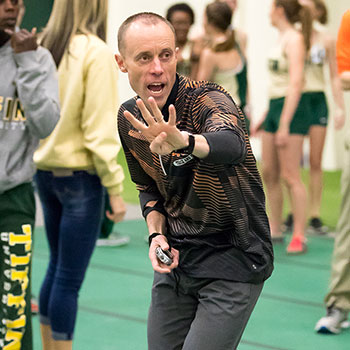 Maus has taken advantage of professional development opportunities and encourages them among his staff. He has earned Level II Certification in distance and throws, regularly attends regional and national conferences, and served two seasons as Division III president of the United States Track and Field and Cross Country Coaches Association.

“This sport changes,” he said. “From evolving training philosophies to advances in nutrition and exercise science, there’s always something else I can learn.”

That appreciation for life-long learning came from his liberal arts education at Heidelberg.

“You had your major, but you had to take other classes, and studying different disciplines required you to learn in different ways,” Maus said. “That foundation has helped me throughout my career.”

It’s a career filled with accolades. Among other things, he has been named regional coach of the year five times, led the women’s track and field program to a third-place finish at the Indoor National Championships in 2018, and guided 13 OAC Championship teams as well as five All-Americans. Through all his success, he hasn’t become complacent.

“Even when you have a solid training philosophy and program, you can’t coast because every athlete has a different personality. Last year, I had two of the best half-milers in the country, and I didn’t train them the
same way,” Maus said.

Maus challenges his athletes every day to continue to learn and strive to be better.

“Kids have to buy-in to the program,” he said. “If they have the belief and trust in the process, they’ll improve.”

That belief and buy-in comes from having strong relationships with both coaches and teammates, something Maus fosters through individual goal meetings, team-building activities, and the ability to balance serious work and light-hearted fun. Coaching at a Division III institution means he’s coaching athletes with a wide variety of talent, but who all put in the work because they love the sport.

“The best part of this sport is that athletes can improve at any level,” Maus said. “I’m happy when any athlete accomplishes an achievement, no matter where they fall on the depth chart.”

In his 10th season as head coach, Maus oversees 40-50 cross county athletes and around 100 track and field athletes every year plus directing and leading his assistant coaches. He’s seen a lot of crossover from his business education – from budgeting operations to organizational management and event planning.

“I’m managing people and basically running a business,” he said. “It’s like I’m a CEO of track and field.”

It’s that balance of business acumen and relationship building where Maus shines.

“I don’t think you realize the importance and influence of the relationships you develop in college until you get older,” he said. “My professors and coaches were always approachable and available and I try to be that way for my athletes.”

Those Heidelberg connections remain strong to this day. Maus has remained in contact with coaches Larry Brown and Brent Kimple as well as many of his teammates. He credits business professors Gary Keener and Jim Chudzinski for his academic success, but was also greatly impacted by professors from all around campus, including Dave Hogan, Skip Oliver and Rita Barga.

“Coaching is not just writing workouts; it’s about building relationships with your athletes and providing them experiences to grow. I learned that at Heidelberg.”