Rock On: The making of Harold’s Warehouse

In the fall of 1968, Rick Hills, Tom Dunn and Greg Kirk arrived on campus as economics majors. They soon found out they had something else in common: pop/rock music. Rick, a self-taught keyboard player, Tom, a guitarist, and Greg, a bass guitarist, soon added a local drummer, Elden Young, and vocalists Jake and Rick Brunner. From 1970-1972, the band known as The Kinetic Playground was playing gigs for the college, private parties and a local night spot, eventually changing their name to Harold’s Warehouse. Their band experience was fun, enriching and put some extra cash in their pockets. It also bound them together as great friends.

As students, the band played most Friday and Saturday nights at a local pub and at campus and community events and parties. “We made a lot more money than we make today,” Rick Hills said. “It was a great way to supplement our living expenses. That was the original idea.”

The band members went their separate ways after graduation. With the exception of a rare phone call or two, they were out of communication for 42 years as they pursued successful careers and lives across the country and abroad. About five years ago, Rick discovered some old reel-to-reel recordings of the band from a performance at Shelly’s Lounge back in the day. He had the tapes converted to disk and on a whim, sent copies to his former bandmates as mementos of their time together at Heidelberg. “It took only a matter of days for the group to decide we had to get together again, not just to renew our friendship but also to see if we could still function as a musical group,” wrote Greg.

The answer was yes. “It was amazing. When we got back together, it was like we were college roommates all over again,” Rick said.

Their first reunion the summer of 2013 was a fantastic experience. Since then, the group gathers twice a year for a week to play – during the summer at Rick’s home in Amherst, New Hampshire, and during the winter at Greg’s home in Fort Myers, Florida. Although they miss bandmate Rick Brunner, who lives, teaches and performs in Europe, they agree they would gather simply for the friendships and the fun of playing. But they’ve taken it a step further, booking gigs to play at small venues during their reunion weeks, most recently performing for a large party in Fort Myers in March.

Harold’s Warehouse is grateful for their renewed friendship after 40-plus years. “If not for our Heidelberg experience, none of this would have happened,” Rick said.

All of the members of Harold’s Warehouse have had successful careers across a broad spectrum of professions: the corporate world, the military, teaching/coaching and the performing arts. That’s the best testament they could give to the foundation they received at Heidelberg.

Rick Hills became an executive with Fidelity Financial in New England, Tom established an independent business insuring McDonald’s franchisees, Greg became a federal employee serving Naval Air Systems Command Headquarters, Jake stayed in the area and became a teacher, administrator and coach and Rick Brunner has enjoyed an opera career in Europe and the U.S. All but Rick Brunner are officially retired, although Moyer assists the ‘Berg football team as a defensive coach.

But their friendships – although interrupted by four decades – have stood the test of time. These are the same types of personal relationships and strong connections that are still being made on campus today. As a tribute to their alma mater and their renewed friendships and in honor of their Class of ‘72’s 45th reunion, Harold’s Warehouse will perform live during Alumni Weekend, on Saturday, June 17. They’ll be the entertainment for a porch party that begins at 4 p.m. at The University Commons back patio.

So what can we expect from Harold’s Warehouse during Alumni Weekend? “I have no idea,” Rick joked. As they did during their student days, they checked their egos at the door and work well together as a team. Tom is a lifelong jazz guitarist, but Rick and Jake never pursued music after graduation – until the group reunited.

“We all get along so well,” Rick said. That will no doubt be evident when Harold’s Warehouse takes the stage, back where it all began. Their set will include about 25-30 songs, including favorites from the British Invasion. 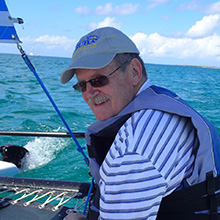