Biology professor Dr. Justin Pruneski may have found a CURE for the traditional science lab experience, and through it, his students learn how to take the next steps in their research.

As part of this innovative Course-Based Undergraduate Research Experience (CURE) in Microbiology BIO 325 this semester, Justin introduced his students to the Small World Initiative, or SWI. SWI – an example of a CURE – uses crowdsourcing to tackle the growing problem of antibiotic resistance by tapping into the collective power of thousands of student researchers concurrently taking on the same challenge. Since it was launched at Yale University in 2012, the SWI has grown to nearly 300 participating colleges and universities worldwide.

After having heard about the CURE concept at conferences and in conversations with peers, Justin jumped on board to try out the teaching technique for the first time in spring 2017. “I was drawn to it,” he says, “because the subject matter was powerful and it was very doable at Heidelberg.”

CUREs offer students a different way to build on the scientific tools and techniques they are learning. “This way, they immediately get to see the applications of all of the tools they are adding to their toolkit,” Justin explained.

Here, the entire laboratory course is integrated into the SWI project “which has an overarching goal to try to address an important, real-world problem to get students interested and engaged.”

For the SWI lab project, students looked no further than Heidelberg’s backyard. Starting in January, they collected soil samples, conducted initial characterization of the soil, performed testing to isolate and quantify bacteria in the soil, isolated a diverse set of strains and then tested them for antibiotic activity. Finally, they utilized classic microbiological techniques such as staining and microscopy, and modern molecular approaches such as Polymerase Chain Reaction (PCR) and DNA sequencing to identify and characterize the organisms.

Pretty intense stuff, this crowdsourcing antibiotic discovery, but it has inspired the future scientists in Justin’s class to take their research to the next level. After taking the class, graduating senior Kaylee Wilburn of Oak Harbor decided to pursue a master’s degree in microbiology. Two other students, senior Caleb Gerber of Lakeside Marblehead, Ohio, and junior Andrea Russell of Coolville, Ohio, will use what they learned in the course as the basis for further research this summer and next school year.

Caleb explains: “Beginning this summer, Andrea and I will be conducting research to identify the isolate of ours that has the best antibiotic activity against Staphylococcus aureus, a pathogenic bacteria associated with infections such as MRSA. This will transition to the fall, when we plan to test the antibiotic ability of this isolate in rats.” 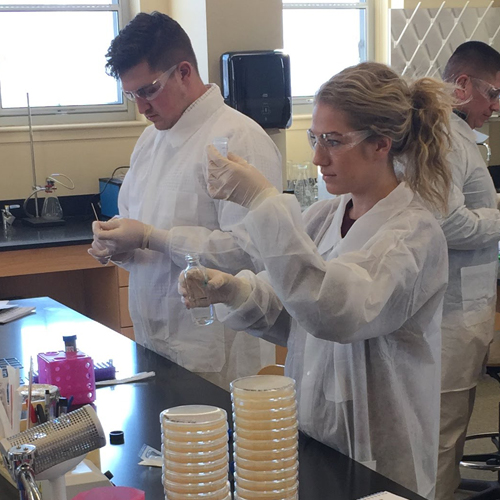 “Our efforts in this course prompted our research and it has also opened my eyes to the world of microbiology,” Andrea says. “I also hope to spread the message about how serious and important it is to utilize antibiotics properly… If we do not implement more efforts to combat this crisis, we may lose antibiotics altogether.”

In keeping with the SWI purpose, Caleb also plans to undertake an additional project in the fall to bring awareness to the antibiotic resistance crisis.

Caleb and Andrea also enjoyed the case studies in the lecture portion of the microbiology course. “These experiences put us into positions where we were learning in more involved ways,” Caleb says. “This really helped drive home the ideas that we were learning. We were in the forefront of our learning process.”

The students also wrote their own case studies, allowing them to explore a topic in depth enough to teach it to the class. Andrea and Caleb’s group titled their case study “The Friend of My Friend is My Enemy: Killing Cancer with Bacteria.” It explored a type of treatment that involves using bacteria to help the immune system target cancer cells.

“This prompted us to think about all of the things we have learned in previous courses and draw it all together to think things through,” Andrea says.  Caleb adds, “One of the greatest parts of this project, though, was the relevance of it.”

That’s the impact Justin envisioned when he launched the CURE approach in 2017, and it’s picking up steam.

“I love exposing the students to topics like these that are very interesting and powerful. It gives them opportunities to dive into other fields they hadn’t previously considered,” he says.

Published in The Sciences