First-generation college senior Enya Granados arrived at Heidelberg with the perfect mindset: Say yes to as many new experiences as possible. She’s graduating with a phenomenal academic record, a pocketful of awards for her research and a legacy of advocacy for diversity on campus.

She’s made a name for herself off campus, too, completing summer research internships at two major universities and landing a prestigious fellowship as she launches into her teaching career.

I want people to see me as a changer,” Enya says, “someone who was really passionate about that and someone who set the bar high.

Her journey over the past four years has been equal parts challenging, satisfying and promising.

Entering as a pre-med and biology major, she added a second major after spending a month in China, teaching English at Tianjin Normal University as part of Heidelberg’s long-time exchange with TNU.

“China was a little seed. It had an awesome impact on my life,” Enya says. She formed a bond with graduate counseling professor Dr. Marjorie Shavers, her teaching partner in China, that led to an important a-ha moment: “It occurred to me that ‘Hey, in education, you can build relationships.’” Missing that type of personal connection, Enya added an education major at the beginning of her sophomore year.

Motivated to make up for the lost year, something clicked. Enya realized she has a passion to combine teaching and research. “As soon as I admitted that to myself, it was like a rocket to outer space,” she says.

That next summer, buoyed by encouragement from her biology professor, Dr. Justin Pruneski, and her education professor, Dr. Karen Jones, Enya completed a research program at the University of Wisconsin-Madison that provided a glimpse into her future. The program allowed her to synthesize her two academic interests of education and biology.

Enya continued to push open doors. Twice, she took advantage of amazing experiences at National Association of Biology Teachers conferences, and connected with ‘Berg alumnus Chris Monsour, ’99, a biology teacher at Tiffin Columbian High School, for her Junior Methods class. “He’s been one of the most amazing mentors for me in terms of my biology teacher life.” She also completed a summer internship at the University of Georgia.

Today, she acknowledges and appreciates yet one more personal connection: the one she formed with Cherrelle Gardner, director of Multicultural Student Affairs. With an all-consuming academic schedule, Enya felt she was missing out “on opportunities to get my cultural appreciation” while on campus.

With Cherrelle’s guidance, Enya co-founded Latinx Unidos, a student organization which celebrates Hispanic heritage through campus events and activities such as cooking authentic meals, Salsa dancing and sponsoring a networking opportunity in conjunction with the spring Patricia Adams Lecture Series.

When she thinks about her culture and diversity, Enya sees the big picture. The topic was so important to her that she decided to make it the theme of her Honors capstone project. She conducted focus groups with students about their Heidelberg experiences, researched resources offered at other colleges and universities and ultimately, came up with recommendations to improve the minority environment on campus.

“I just wanted to get the ball rolling to make it a better place,” she says 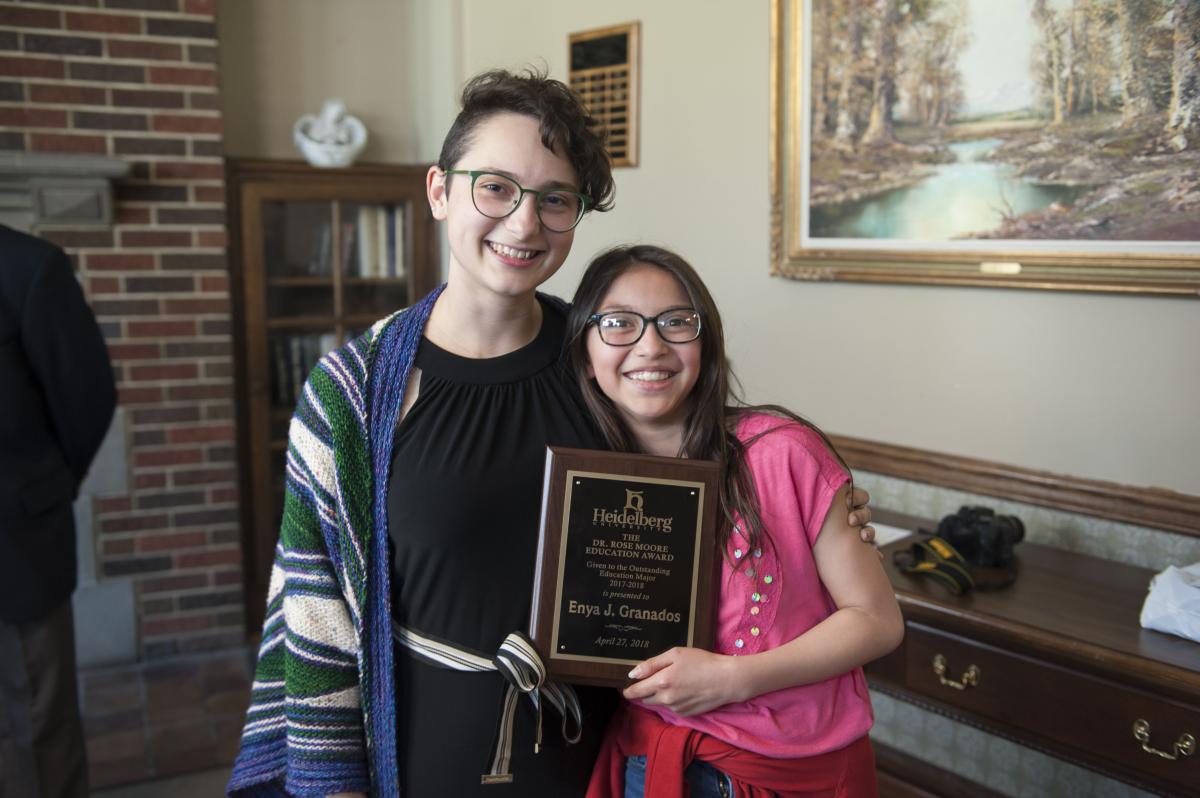 That drive, that passion is rooted in her love of family, in particular, her desire to make a better world for her 10-year-old sister, Gabriella, affectionately called “Nena.” “I do everything for her and because of her,” Enya says. “I see the things she’s had to deal with at school and I’m determined to make a world where she is accepted and she doesn’t have to experience these barriers.”

Enya’s crowning achievement came earlier this semester when she learned she would be receiving one of only 30 fellowships from the prestigious Knowles Teacher Initiative. The initiative is an intensive, five-year program that supports early-career high school math and science teachers, helping them develop teaching expertise and lead from the classroom. Not ironically, Chris Monsour wrote one of Enya’s letters of recommendation and knew one of the evaluators in the highly competitive process.

To anticipate the future that awaits Enya, we need only grasp the sum of her Heidelberg experiences, the meaningful connections she created and the impact she’s had on campus – the same impact she’ll have in the classroom and the research lab.

“I love the path I’ve chosen,” she says.

Following graduation, she is moving to Auburn, Alabama, to start her teaching career and eventually, go to grad school. “I know I’ll be busy, intellectually stimulated and making an impact.”