These four years are for life: Commencement 2016 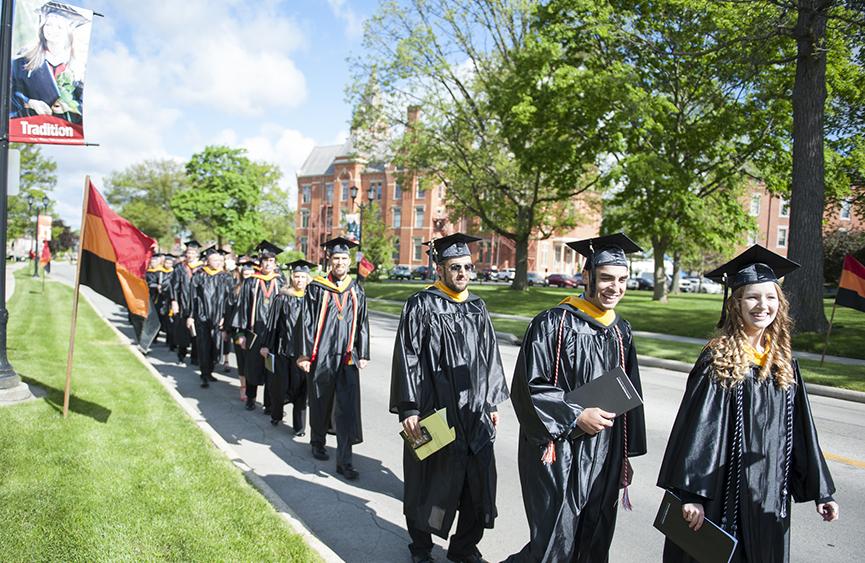 Graduates and their families were bundled in coats and hats for Sunday’s 163rd Commencement, but not even the chill, wind, or snow could stop the evident excitement and pride felt by the Class of 2016.

Donning gloves, President Rob Huntington began the ceremony by telling the graduates that while commencement marks the end of their Heidelberg careers, “This is the beginning of the rest of your lives.”

That sentiment set the tone for the event and highlighted the bright futures of all the graduates.

Two students were selected to address the Class of 2016 – undergraduate communication and theatre arts major Jordan Crase, and Kate Topp, who received her master’s degree in counseling.

Topp told her personal story as well as the stories of several of her classmates about how they discovered their passion. She encouraged all in attendance that it’s never too late or early to discover what you want to do.

Sometimes you go looking for your passion, and sometimes it finds you,” Topp said. “We need to use our passion to lead a life we are proud of.

Crase walked her fellow graduates through their four years of emotions and the shock of being seniors.

Our entire lives flashed before our eyes. We were about to leave our second home,” she said.

But while endings are inevitable and bittersweet, the Heidelberg family remains a strong force in the lives of all graduates.

The memories and experiences of Heidelberg are for life,” Crase concluded. “Let’s show the world how great Heidelberg students are.

Aris Kaplanis, ’74, delivered the commencement address. Kaplanis is the former president and CEO of Teranet. This past year, his generosity led to the naming of the Aris M. Kaplanis Master of Business Administration Program and he provided strong support for the new PlusOneAdvantage Free MBA Program.

Beginning his address, Kaplanis admitted he couldn’t remember his own commencement speaker, but wanted to give all graduating students advice they would remember.

Life is about choices you make – the good ones and the bad ones,” Kaplanis said.

Wanting to guide the graduates to make good decisions, Kaplanis cited an acronym he remains mindful of every day – PACE: professionalism, attitude, cooperation and effort. No matter what route the graduates take in life, he said being mindful of how they represent themselves, having a positive outlook, working well with others, and working hard will make them successful.

Kaplanis stressed that the last virtue – effort – was the most important.

Without effort, everything else falls by the wayside,” he said. “Thoughtful action is the key to success.

Kaplanis and Ms. Christian Peele both received an honorary doctor of humane letters degree. Peele is the director of stewardship and development at the Riverside Church in New York City, and she delivered the baccalaureate sermon on Saturday.

Overall, 235 students received bachelor’s degrees and 38 students earned master’s degrees. As graduates walked across the stage to applause and cheers from the crowd, they each received a white rose. The flower signifies the respect, friendship, love and hope they found at Heidelberg. Even a chilly day couldn’t prevent those feelings from warming the hearts of the Class of 2016. Congratulations graduates.