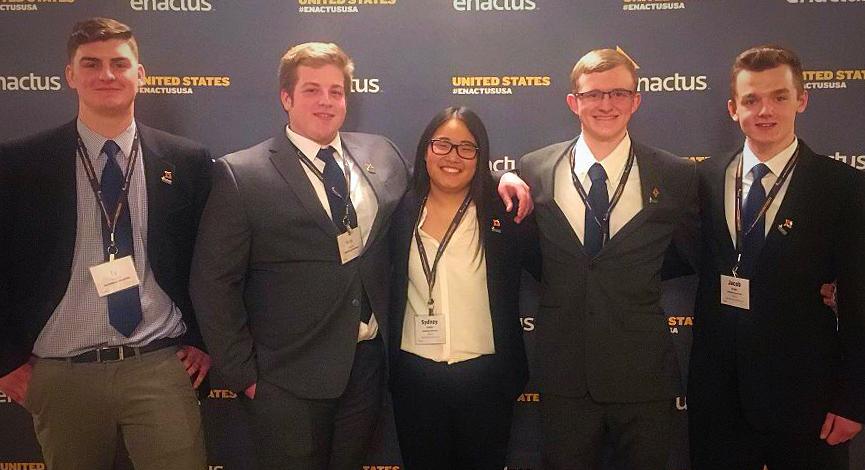 What a difference a year makes. Heidelberg’s Berg Enactus chapter is moving onto national competition in May after the group’s first-ever regional win in Chicago earlier this month.

Competing against the likes of the University of Michigan, the University of Nebraska, SUNY at Fredonia and Western Kentucky, the Berg Enactus team – juniors Sydney Calabro, Kristopher Wingerd, Nicholas Meyer, Jacob Cooper and Ty Garrett -- presented a live, multi-media summary of their entrepreneurial project at the regional competition and stood tall to some tough questioning from the judges.

Berg Enactus has spent the academic year working with the Tiffin-Seneca United Way and the Cherry Street Mission in Toledo as the United Way’s Community Task Force Subcommittee on Homelessness works toward the planned opening a local homeless shelter.

“We call ourselves the incubators of the project,” said Sydney, who is Berg Enactus president this year. “We firmly believe we need to take care of those we call our own.”

Enactus started with a three-step plan – create awareness, develop strategies and help secure a building. The group organized a homelessness simulator and a coat drive last semester for their first goal. Second, they connected with about 10 local partners who are supporting their efforts. According to United Way Director Pat DeMonte, the subcommittee is still in the process of selecting a building.

“They have been integral in the progress we’ve made so far,” Pat said. She added that the Enactus team helped with a business plan for a potential building, including planning for capital and operational costs. The team also helped with a SWOT analysis, offered valuable marketing and advertising assistance and made recommendations about future business direction. “We are very thankful for the work they’ve done,” she added.

Berg Enactus has competed at the regional level the past several years, but this is the first year they’ll be moving on to the U.S. National Exposition. So, what made a difference this year? Several factors, according to Sydney.

“We took a different approach to the project and something just clicked with this team,” she said. The nature and scope of the project appealed to the team members’ passion to make a difference in the community, too. “We had a bigger vision and believed we could do bigger things. And we had some strong partners.”

But the team still had to perform under pressure when it counted most. They’ll have a chance for even greater things when they compete in Kansas City May 20-22. The champion teams from the national expo advance to the Enactus World Cup.

Congratulations and good luck to the Berg Enactus team members and their advisors, Dr. Pat McLeod and Sofey Fugate.