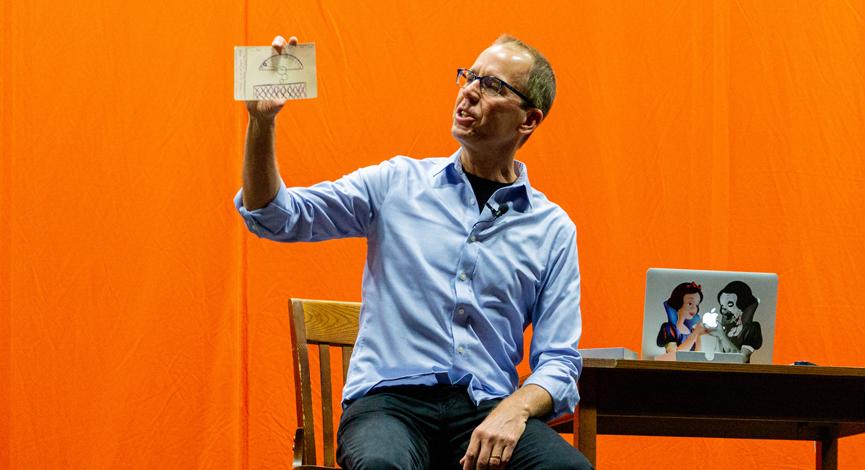 “Hi. My name is Frank and I collect secrets.”

Fifteen years ago, Frank Warren embarked on a movement that provided an outlet for people to creatively and anonymously express never-before-shared secrets on postcards. Frank brought the power of PostSecret to Heidelberg Wednesday as the October HYPE Career Ready® Day keynote speaker.

“I think we all have our secrets. Imagine keeping them in a box. Every day, we make a decision about what to do with our box,” Frank said. “Do we bury it where it can haunt us or bring it out into the light and share it with people who can help us?”

Throughout his presentation, Frank shared examples of some of the 1 million-plus postcards that have arrived at his home. They are poignant, inspiring, romantic, funny, heart-wrenching, healing and revealing. Most of all, they led him on a lifelong commitment to be an advocate for mental health that continues to this day.

PostSecret has evolved into a worldwide phenomenon, including six New York Times best-selling books, a growing social media presence, national art exhibits, a theatrical production and two apps. Perhaps one of Frank’s proudest outcomes, however, is that PostSecret has raised more than $1 million for suicide prevention and earned him a Mental Health Advocacy Lifetime Achievement Award.

The postcards are a visual demonstration of personal struggles and personal successes as we help each other and release our burdens.

“When we’re keeping secrets, those secrets are actually keeping us,” Frank said. “They rob us of the opportunity to live full, truthful and authentic lives.”

When postcards began finding their way back to his personal mailbox, he began posting them on his website weekly. At first, he received 100, then 1,000 the next week … the postcard volume just kept growing. “Then they started to arrive from around the world,” he said. That led to the realization that people’s fears, desires and confessions were universally the same.

“I accidentally tapped into something unexpected,” he said.

As the PostSecret phenomenon evolved, Frank began to understand that there are two kinds of secrets: those we keep from others and those we keep from ourselves. He also came to an important realization: “Maybe I needed this place to share as much as everyone who has shared with me,” he said, referring to his own difficult and abusive childhood. Sharing his own struggles has motivated him to be a better person and make a commitment to assist with suicide prevention, he added.

Secrets revealed have the power to connect people and heal relationships. They also can save lives. Because 65 percent of students considering suicide will confide in a friend before a parent or counselor, even the simplest act of kindness can have a huge impact.

“The smallest actions can make the biggest impact on our friends, classmates, even strangers,” Frank said. "Perhaps someone said just the right thing at just the right time. They saved a life and they don't even know it."

Warren revealed his favorite all-time postcard message which arrived on a dollar bill. It was a spiritual secret, really, and one that perfectly captures the essence of PostSecret. It reads, in part, “Free your secrets and be who you are meant to be.”