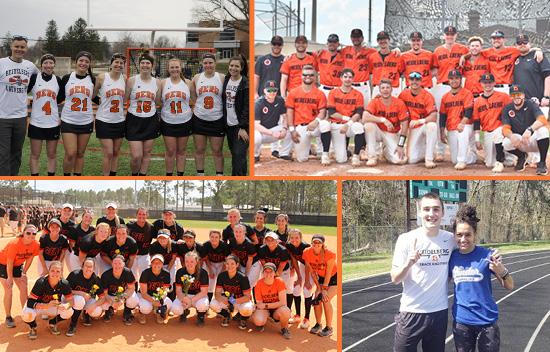 The COVID-19 pandemic and measures taken to thwart the spread of the virus, though necessary, cut short a number of athletic seasons for the student-athletes of Heidelberg University.  Some were halted at the highest point, others midway, and still a few were stopped before competition began.

While the semester continues remotely, the loss of athletics has left a large hole in the Heidelberg community.  To help fill that void, here is a synopsis of all seasons cut short.

Dylan Roth was Heidelberg’s lone qualifier to the NCAA Division III Championship in Cedar Rapids, Iowa.  On the eve of competition, Roth was on his way to get in a workout when news of the cancellation reached him.  His season concluded with a 36-1 record and a program-best .971 winning percentage. As a team, Heidelberg compiled a team GPA of 3.479 -- a mark that put the team in the top 20 in the nation.

Like Roth, national qualifiers Ariana Coleman (Women’s Long Jump) and Dan Stoll (200M and 400M) were on the cusp of competition when the meet was canceled.  Coleman, a freshman, set a school record in the long jump and seems poised for a remarkable career. Stoll, a senior, watched his illustrious career come to a premature end.  A year ago, Stoll seemed destined for a spot on the podium at Nationals until a hamstring injury at the OAC Indoor Championships dashed his dreams. After nursing his way through the injury for the remainder of the 2019 campaign, Stoll -- fully healthy -- seemed to find his stride in 2020.

With one of Heidelberg’s most experienced programs, the men’s golf team was looking forward to the 2020 spring season.  The squad had just one competition before the season came to an end. Seniors include Blake Kaffenbarger, Bryan Kennedy, Mark Lair, Aaron Mitchell, Logan Dwelle, Jaret Miller, Kyle Nekoloff, Jake Belford and Chandler Kraft.

Like their male counterparts, the women’s golf team had a veteran-laiden team poised to make noise in the OAC this season.  Unlike the men’s team, however, the women’s squad had yet to start competition. The four seniors on the team were Morgan Fultz, Megan Brugnone, Charlotte Sypula and Anastasia Lindemann.

Following a promising fall, the tennis programs boasted their largest rosters in recent memory.  Their schedule -- which had a number of first-time opponents -- had not yet started when the season was halted.  While the women’s side had no seniors, the men’s squad were led by Tate Schoen and Porus Shroff.

Perhaps the most highly anticipated season of all was the baseball season.  Fresh off of their trip to the 2019 Division III College World Series, Heidelberg began the season highly ranked in the D3baseball.com poll and the ABCA poll.  The bats finally warmed up in Florida and the team seemed to be finding its footing when games were halted. Heidelberg finished the year with a 7-5 record. Senior Trevor Adkins had already amassed three wins while closer Cameron Deemer had picked up four saves.  Junior Keaton Mark led the team with a .341 average and three home runs.

Led by first-year head coach Mari Deppe, the ‘Berg softball squad was also in Florida when they learned of the cancellation.  After the bad news had broken,the team was still able to find four more opponents to play and closed the season with two shutouts.  Going 9-3 overall, HU was led by a cadre of veteran leadership. Senior Bethany Redman hit a team-high .387 and drove in eight. Senior sisters Casey and Kaitlyn Moore packed a punch, as did classmate Shelby Miller.  In the circle, Kaitlyn Moore and Stephanie Drapp settled into the top spots and were pitching well.

The 2020 seniors were the first to play four years for the Heidelberg lacrosse team.  With one win in five games, the team suffered a number of narrow defeats, but felt they were beginning to gel.  Alex Bruder had a team-high 19 points, including 14 goals.

First-year head coach Ryan Kuhn helped lead Heidelberg to a perfect 4-0 record to start the season.  Angela Lulejian picked up a pair of OAC Player of the Week honors in the shortened campaign and finished with 18 goals and 22 points.  Anna Winnicki was a Defensive Player of the Week due to her ferocity in the midfield. In goal, Mandi Phillips picked up all four wins, allowing 4.87 goals per contest.  Like the men’s team, many of the seniors on the team were the first four-year players for the budding program. Other seniors joined the team along the way. Seniors include Jenna Carman, Bri Casement, Dana Dudley, Alexa Hawk, Michaela Ueberroth and Anna Winnicki.