20 years later: Reflections and lessons from 9/11 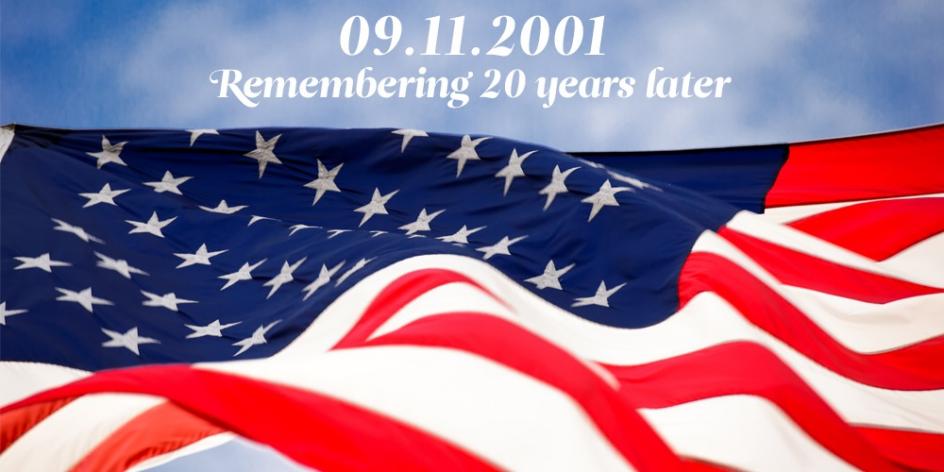 If you were in your late teens or older than 20 on Sept. 11, 2001 – the day terrorists attacked America – your memories are likely vivid of that day 20 years ago. But today’s generation of college students is too young to remember or not yet born. Their knowledge is limited to the lessons learned in school, on the internet and through personal anecdotes.

It’s a situation of real vs. textbooks.

It can be tough to view past events through current eyes, to be impacted by an event you didn’t really experience. Most of the learning has occurred in school or from stories told by parents and teachers.

But senior Bernae DySart has an understanding of the legacy of Sept. 11. “I always understood that it was an act of terror,” she says. Through her elementary and middle school years, she was exposed to more and more details by listening to the voicemails of the victims and watching news reports. Her understanding deepened. It also provoked big questions.

“It’s not enough to know the details but to also be aware of how other people were affected and the lasting impact on American society,” Bern says.

As a history and political science major, she’s had opportunities to expand her understanding even further at Heidelberg. She wonders about the justification for the attack. As the anniversary approaches, she wonders most about justice. What is it? How does it happen? What should it look like? Should it happen at all?

Bern says, “I cannot give a definitive answer. As I acknowledge the losses people have suffered and the tragedy that occurred 20 years ago, I can only sit back and think about our healing and how we help one another. How do we contribute to collective healing and what does that look like?”

When sophomore Wednesday Conley thinks about the 20th anniversary, she’s struck by the fact that there hasn’t been a terrorist attack of this magnitude on American soil since 9/11. And she hopes that continues. “Hopefully one day, we will have a clear history of everything that happened that day,” she says.

In their own words

Meet six people who graciously shared their recollections of 9/11 and the days, weeks, months and years that followed. We’re grateful for their willingness to speak from diverse perspectives about how they were affected, sometimes in deeply personal ways, about the cultural impact, and what they would like Generation Z to understand about the day that changed the world.

Debbie Bonaminio, a ’95 ‘Berg alumna who was caught in the aftermath of 9/11 while in Manhattan that day
“What did I see that day? I saw the face of pure, unadulterated evil. I saw death and destruction. … I saw fear and anguish, but I also saw kindness – strangers helping one another with a hug, reaching out a hand, sharing mobile phones as the unimaginable played out, restaurants and stores handing out water and inviting us in, as we thousands, covered in ash and debris, dazed and in shock, made our way from lower Manhattan to wherever we could get to.”

Col. Chad Breeden, ’88, U.S. Marines (retired), current ‘Berg Alumni Council President
“The attacks of 9/11 caused the single biggest change to our daily lives in my lifetime. There was a palpable sense of fear of the unknown in the immediate aftermath even overseas. I was able to see firsthand the importance of our allies. … Although it was America that was attacked, it was clear early on that we were not in this fight alone.”

Jeff Garvin, ’04, interim Athletic Director and a sophomore on campus on 9/11, living in Brown Hall
“When I look back, I really think about the kind of misinformation and disinformation (surrounding the attacks). At the time, I feel like we believed everything we saw and heard. I was inspired by the campus community and the way we came together. There were a lot of caring people … a lot of 19- and 20-year-olds being consoled.”

Capt. Dave Krebs, ’87, U.S. Marines (retired)
“Watching the attacks unfold from my U.S. Marine squadron ready room, we all understood immediately this was our generation’s Pearl Harbor. We all had friends working in the Pentagon and prayed for their safety and for their families. We all went home that day knowing we would soon be called upon to respond.”

Dr. Sarah Lazzari, assistant professor of criminology and sociology who was 22 and living on the West Coast, visiting her family in California, on 9/11
“I was preparing to fly home to Washington that evening. I had walked over to my grandpa’s house and was watching TV. … As I sat there flipping through the channels, I came upon what I thought was a movie. …  I grabbed the TV Guide and was expecting to find a ‘Die Hard’ movie or an action film. … My grandpa, who was a World War II veteran, came over and sat down with me. I have no memory of what we discussed. I wish I had talked with him about how these images made him feel.”

Dr. Marc O’Reilly, professor of political science who was in his very first semester teaching at Heidelberg
“That day and the days that followed were terrifying. As a professor of Global Politics, I did not know if the attacks were a single occurrence or presaged many future attacks. … As the recent, controversial U.S. withdrawal from Afghanistan likely ended the post-9/11 era, the legacy of those two decades will be fiercely contested in the coming months and years.”

Chad: “I remember thinking there would be retribution for the attacks, that whoever did it would pay a steep price. I did not think I would find myself planning for my unit’s participation in the military operations in Afghanistan, let alone deploying to Kandahar Air Base a little over six months later. Or, that I would later deploy to Iraq twice to visit the Marines and sailors in my unit.”

Sarah: “There was this sense of incredible pride in America, and people were able to come together in celebration of our great nation. However, this pride was not extended to people of Middle Eastern descent. I remember hearing about the ways in which they were treated, and I remember hearing the idea that they were perceived as a threat. But I was 22. I was still very caught up in my own reality. My world view had not expanded.”

Debbie: “On Sept. 12, we as a country were unified as never before. Everyone put out flags. Strangers made food, volunteered, checked on neighbors. … Some were spurred on to join the military or to pursue that childhood dream of being a firefighter or police officer.”

Marc: “Air travel, for one, evolved dramatically. Airport check-ins became complicated, time-consuming and stressful. You felt vulnerable, a new feeling for many of us. … Americans became more suspicious of one another.”

Dave: “Our society transformed. Barricades and increased security were everywhere. Armed soldiers were at the airports. We created the Department of Homeland Security, a massive undertaking to synergize multiple competing entities into a cohesive effort.”

Regrets, we’ve had a few

Debbie: “That moment, ever too brief, of a country united has long since evaporated. That is a legacy of 9/11 I wish we could get back – of caring for others regardless of race, creed, sexual orientation, religion, religion or political party. We are a more divided nation than ever before. But on one of America’s worst days, we were united as one."

Jeff: “The ways that many of us felt toward people of Arab descent is pretty shameful. I look back and wonder … were there things I said or wrote that may have hurt someone?”

Sarah: “I wish I had spent the time talking with my grandpa about his experiences in World War II. I wonder what he thought when those planes crashed into the towers. … I wonder what he thought when my sister went to West Point and then to Afghanistan. I am sorry that they had to bond over tragedy, loss and death. I wish I could take away the pain that has forever changed my sister.”

Debbie: “I looked up and saw the South Tower begin to fall and a wall of debris headed toward me. … The days after were a blur, as if I was living outside of myself. The grief was suffocating.”

A few months later, Debbie started to develop respiratory symptoms and was diagnosed with the “9/11 cough” and several years later, with PTSD and anxiety. But those are the negative outcomes. Over time, she has become more optimistic, more empathetic, more patient and more understanding.

“I make sure I hold a door open for someone, say please and thank you, show kindness and a smile to a stranger, embrace the differences in others rather than take offense, and I try to treat others as they deserve to be treated – with dignity and respect – because on a day that had both evil and kindness, kindness did and will always overcome hatred.”

Dave: “I highly recommend touring NYC’s Ground Zero, the Pentagon Memorial and the Flight 93 Memorial in Somerset, Pennsylvania, then take a quiet walk through the newest section of Arlington National Cemetery to reflect on the true cost of freedom subsequent to the attack on our great nation.”

Jeff: “Have the conversation that points out some of the parallels between 9/11 and the COVID pandemic and how both affected everyone. Think of the way the world flipped upside down in 2020, certainly for our seniors.”

Chad: “As the saying goes, those who forget history are doomed to repeat it. I think it is not only important to watch the images from that day but to also continue the traditions established in the aftermath, like naming 9/11 Patriot Day. … Even during the fear and vulnerability of that day, and in the days after, our great country came together to support each other and our troops.”

Marc: “Watch the 20th anniversary coverage on CNN and other news stations.”

Debbie: “Start by watching some documentaries – not fictional movies. Hear the voices of those who were there. … Take the time to understand what America and the world were like then. Read newspaper articles from that time, find videos of old newscasts and see how things unfolded after 9/11 until today. … Much of what was seen then and captured on film was sanitized compare to what I saw that day with my own eyes. Be glad for that.”