Across the Divide: The meaning of 'never again' 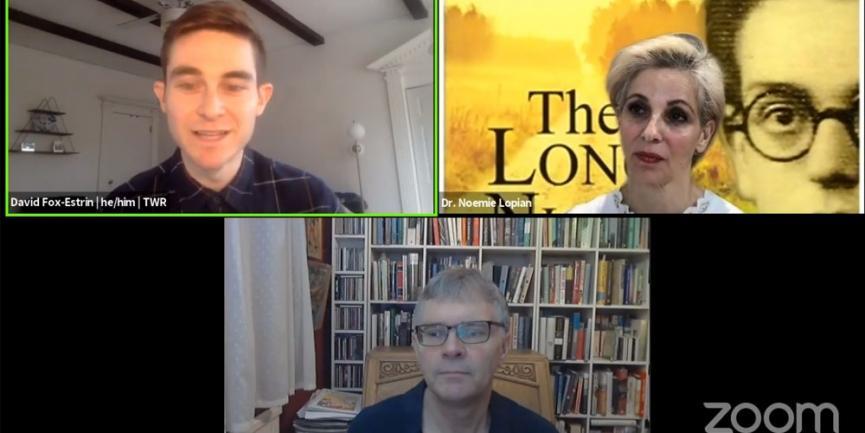 In honor of International Holocaust Remembrance Day, Heidelberg was the co-host – along with the Together We Remember Coalition – for a global virtual event, Speaking Across the Divide. The presentation featured United Kingdom-based storytellers Dr. Noemie Lopian, the daughter of Holocaust survivors, and Derek Niemann, the grandson of a Nazi SS officer.

Derek and Neomie shared their family stories as a warning of the perils of extremism and to inspire greater understanding.

For his story, Derek focused on the ease with which an ordinary man – his grandfather – could descend into doing such extraordinarily evil things. Noemie spoke about why and how the Holocaust is relevant today and must never be forgotten.

Following their stories, Derek and Neomie answered a series of questions from TWR founder David Estrin. David, the grandson of four Holocaust survivors, has visited Heidelberg several times as part of the Lichtman-Behm Genocide Lecture Series. His grandfather, the late Jimmy Lichtman, is a namesake of the series.

David asked Derek and Neomie to reflect on the meaning of “never again,” in reference to preventing future incidents of genocide.

“For me, it’s a never-ending call to action. There’s a sense of finality to it … that our vigilance should never cease,” Derek said. “It happened in the past and it will happen again, and we must take steps to prevent that.”

For Neomie, it’s about educating people about our differences, beginning at a young age by teaching kindness. Seventy-six years ago – the end of the Holocaust – seems like long ago, especially for today’s generation of students. “That’s why dialog is extremely important,” she said. “When we’re not in our echo chamber, our learning goes up exponentially.”

She added that it takes courage to be proactive and not simply be a bystander. Derek agreed, citing the words of a Holocaust survivor at one of their talks. “Talk to people not like you … people with different religions, different ideas. Get to know them, make friends with them,” the survivor encouraged. “It’s really about showing respect to all people. That’s fundamental.”

Watch the Speaking Across the Divide presentation.