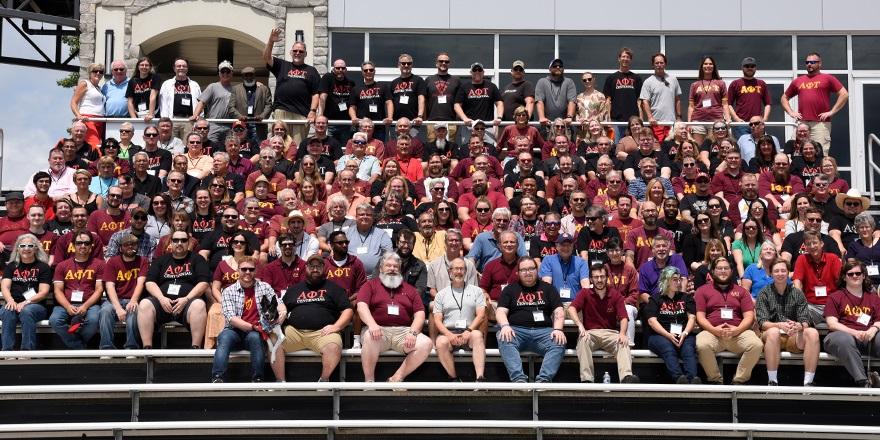 The bonds of true friendship can never be broken. In time, they expanded, even strengthened. That was the case with the intergenerational Alpha Phi Tau 100th anniversary last weekend. AP Lil Sisses completed the warm and wonderful celebration. It was, in the words of AP Dennis LoConti ‘11, “the ultimate in family reunions.”

In all, about 250 AP and Sis alumni and current members gathered on campus for the celebration that brought laughter, tears, conversations, singing, hugs and shared memories.

“The APs and Lil Sisses should be proud of their connections and heritage,” said AP member and alumnus Ron Price ’77, one of the organizers of the anniversary celebration. “Their brotherhood and sisterhood are stronger today than ever before.”

As it is for so many ‘Berg alumni, the feelings among APs and Sisses are the same: Heidelberg has been the home that they all find their way back to at some point. The miles and years that separate them also make these gatherings much more meaningful and cherished when they do happen.

“Seeing this group of individuals and their bond, and seeing so many of them come back and relive their memories was absolutely priceless,” said Ashley Helmstetter, executive director of Alumni Engagement and Major Gifts.

Sis founder Jessie Cole Kubuske ’76 echoed those sentiments. “It was so wonderful, connecting with old and new friends, bridging those generations, learning what each decade of experiences were and how that brought us to this very special weekend,” she said. “We are quite different, with the connections made between the men and women of Alpha Phi Tau, and this weekend was just another example of how we all make those connections work.”

The weekend of celebration started on Friday with campus tours and a mixer on campus. Saturday kicked off with the AP hall open, followed by the opening of the AP 100 time capsule.

A large contingent of APs, Sisses, friends and family gathered for a bench dedication in front of Pfleiderer Hall in memory of long-time ‘Berg employee Jamie Abel ’91 who created and built what is now the Marketing & Communication Office, and his son, Justin, who died in a tragic auto accident at age 15. Shannon Abel ’92, Jamie’s wife and Justin’s mom, is an AP Sis. It was an emotional tribute, with remarks and memories shared by Shannon and her daughter, Stephanie, as well as Justin’s friend and AP Jonathon Proffitt, ’06, remarks and memories about Jamie from Bob Williams, ’97, and reflections on both Justin and Jamie by friend and colleague Kurt Huenemann, ’83. An AP paddle was presented by Joe Swope, ’22. Wade Young, ’79, a ‘Berg Trustee, provided music on the bagpipes.

Jamie worked at Heidelberg as the director of College Relations from the late 1980s into the early 2000s, so there aren’t many people still on campus who knew him. He passed away in 2020. “I wasn’t sure if there would be much of a gathering for Jamie’s and Justin’s bench dedication,” Shannon said. “But I was overwhelmed with all of the love and support shown to me and Stephanie on Saturday. The best way to describe the weekend: soul quenching.”

For Lil Sis Gail Cordy ’82, the dedication is a memory that will live on. “It was more than just the people who spoke or that I actually knew Jamie. Or that Shannon is one of my dearest friends,” she said. “It was that when I looked around, there was a massive gathering of APs and Sisses, supporting one of our own. That is what family does. We are all better for being part of the family of Aptonalton.”

As the day continued, a scheduled group photo had to be moved from in front of Williard Hall to Hoernemann Stadium. It was a nice problem to have; it meant that the turnout was incredible and everyone was proud of their association that they wanted to be included in the photo.

The culminating event was the Alpha Phi Tau and AP Little Sisses 100th Anniversary Celebration Dinner and Commemorative Event on Saturday night. After a welcome by Dean of Student Affairs Chris Abrams and an invocation by Steve Hall ’75, emcees Dennis LoConti ’11 and Eddie Ortiz ’04 led the group through reflections and memories by the decades. Representing the 2010 classes: Taylor Schulmeister ’13 and Greg Marsano ’16; representing the 2000 classes, Dennis LoConti and Eddie Ortiz; representing the 1990 Classes, Dan Myers ’92 and Torrance Powell ’99; representing the 1980 classes: Joel Consolo ’85 and Mike Wolfe '87; and representing the 1970 classes and serving as the keynote speaker, Mark Beliczky ’77. Dennis and Eddie oversaw the presentation of artifacts and the evening concluded with the Alpha Phi Tau Toast from 1926 and the AP Little Sis Toast from 1973.

The weekend concluded Sunday morning with breakfast and a worship service. “From the oldest person in the room having as much fun as current students … that was awesome,” Ashley said. “There was something for everyone because they share this amazing bond.”

Founded in 1921 as a literary society, Alpha Phi Tau was created with the intention to better those within the group, Heidelberg’s campus and the greater Tiffin community. The fraternity, also known as Aptonalton or the APs, believes in respect, equality and brotherhood. The ideas and practice of respect and equality can be seen in their corollary, the Alpha Phi Tau Lil’ Sisses, as well as the line in their toast that says, “with every respect for all womankind.” The members of Alpha Phi Tau can frequently be seen coming together in order to pursue the greater good, which to them is how they practice their brotherhood. Finally, they also greatly value acts of service. They participate in many philanthropic events, such as the annual Take Back the Night walk through downtown Tiffin, Walk a Mile in Her Shoes and volunteer work within the Tiffin community.