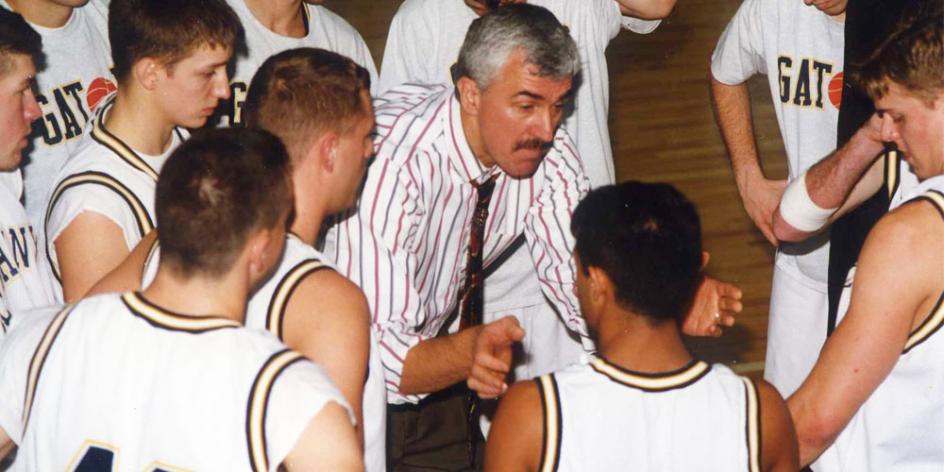 In his previous professional life, ‘Berg VP for University Advancement & Alumni Affairs Phil Ness was a distinguished college basketball coach at Allegheny College in Meadville, Pennsylvania. During his tenure, from 1989-2002, he led the Gators to 184 wins – making him the winningest coach in Allegheny men’s basketball history.

For his coaching success, Phil will be inducted into the Allegheny Athletic Hall of Fame later this month.

“This is such a humbling honor,” he says. “It’s given me time to reflect on just how impactful the athletic experience can be for players, coaches, the institution and alumni.”

He added that small colleges like Heidelberg and Allegheny that have long, storied histories have figured out who to seamlessly combine the extra-curricular with the curricular to have the maximum impact on the college experience for all students and faculty.

“I am so grateful for my time as a coach and how it taught me the inner workings of a college campus.”

During his 13 seasons at the helm, Phil recorded a .541 winning percentage, thanks in part to 107 North Coast Athletic Conference wins. Following the 1995-96 season, he was selected as the NCAC’s Coach of the Year. Phil led the Gators to their most recent NCAC crown when Allegheny defeated Wooster, 66-64, in the 1998 NCAC Championship game. It took the Gators 18 years before they would again beat the Fighting Scots. Following the 1998 NCAC title, Allegheny went on to post a 97-88 win over Baldwin Wallace in the opening round of the NCAA Division III Men’s Basketball Championship. Phil again led the Gators to the NCAA postseason the next year – the last time Allegheny has competed in the national tournament field. Phil also led Allegheny to a share of the 1993 NCAC regular season title, which signifies the last time an Allegheny men's basketball team was able to accomplish that feat.

The formal Hall of Fame induction ceremony will be Sept. 24 during Allegheny’s Blue and Gold Weekend. The 2021 class of inductees will be introduced at the Gators’ home football game vs. Ohio Wesleyan the following day.