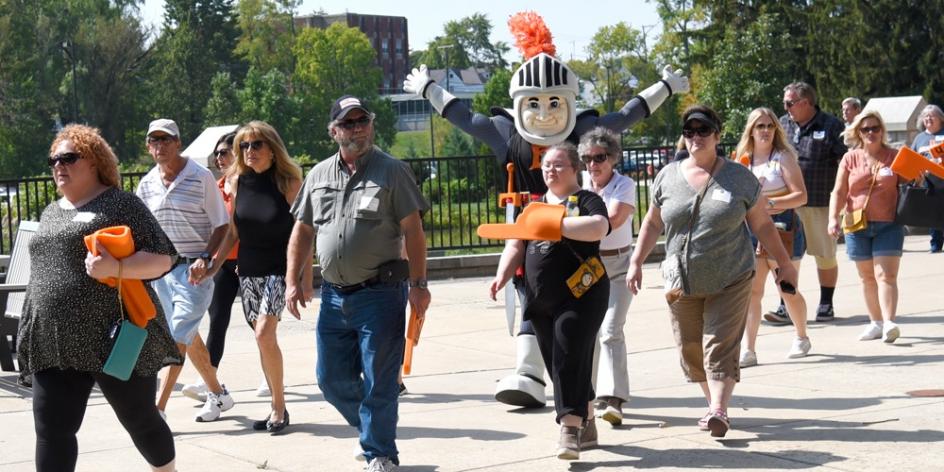 Two valued ‘Berg groups – Families and Benefactors – came together Saturday for their annual weekend of celebration.

At the opening ceremony, Ashley Helmstetter, executive director of Alumni Engagement and Major Gifts, presented the 2021 Alumni of Distinction Award too ’76 alumnus Dr. Ray Farmen. After graduating from Heidelberg, Ray went on to get his Ph.D. in pharmacology and followed that with an outstanding career in the pharmacology industry.

He spent 14 years at Bristol-Myers-Squibb as the company’s director of Metabolism and Pharmacokinetics and the next 25 years as an executive in the contract research organization industry, primarily in the field of bioanalytical chemistry. Currently, he is the vice president of Global Bioanalytical Services for Celerion, where he manages facilities in Lincoln, Nebraska, and Zurich, Switzerland.

Throughout his distinguished career, Ray has authored more than 50 publications and has given more than 20 presentations in Europe.

Ray and his wife, Sharon – who he met at T-Bridge – were unable to be present for the award ceremony. But a video of the presentation is being sent to him.

Following the opening ceremony, Benefactors enjoyed a tailgate party under the big top on the Campus Center lawn. Families joined their ‘Berg students for lunch and conversations with members of the ‘Berg community. Both groups joined the Heidelberg Marching Band into Hoernemann Stadium prior to the football game.

In addition to watching an awesome ‘Berg win at Hoernemann, the groups also cheered on the women’s soccer and men’s soccer teams, participated in Classes Without Quizzes – mini-lectures from ‘Berg faculty members – and enjoyed “The Addams Family” musical, the Theatre Department’s first production of the academic year.

The weekend concluded with Matters of Faith and Bagels Sunday morning.