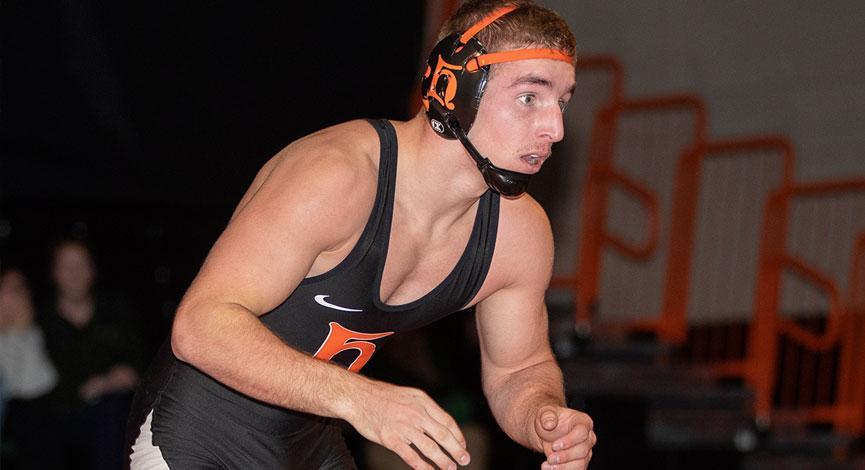 One of the strangest seasons imaginable has ended on a high note for the Heidelberg University wrestling team.  On Friday, 'Berg junior Devin Miller was named the recipient of the Ohio Athletic Conference's John Summa Award, given to the top wrestler in the conference.  Miller, along with two-time All-American Dylan Roth, were both selected as all-conference performers.

Both Miller and Roth were a perfect 5-0 on the season, which was shortened considerably because of the ongoing COVID-19 Pandemic.

"Devin is the definition of 'hard work equals success.' An injury sidelined him his freshman year and to his standards, he had a subpar sophomore year," said Patrizi.  "But those setbacks drove him to work his tail off over the course of the last year, knowing that he might not have a season.  The secret is putting the hard work in because you want to, not because you have to. And I believe Devin understands that."

Roth's storied career ends with a 90-6 record, believed to be the highest winning percentage in Heidelberg history (.938).  After a sixth-place finish at the 2019 NCAA Division III Championships, the Cincinnati native was poised to climb the podium again in 2020 until the NCAA canceled the national meet because of the then-emerging COVID crisis.  The National Wrestling Coaches Association bestowed All-American honors to all the national qualifiers.

Roth returned to Heidelberg this year in hopes of once again qualifying for nationals, but the NCAA canceled this season's nationals because not enough Division III teams across the country participated.  He finished the year as the top-ranked wrestler at 184 pounds by D3wrestle.com.

"I couldn't be any more proud of both Dylan and Devin," said Patrizi. "They are leaders on and off the mat. They're outstanding in the classroom and great teammates.  They have earned these accolades."