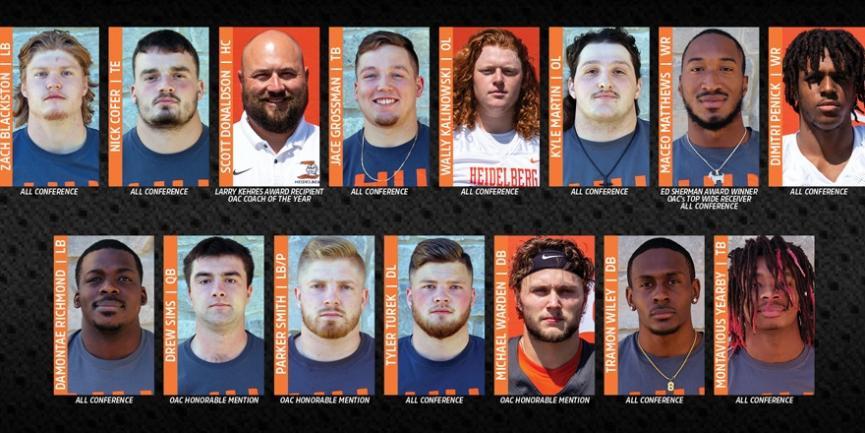 AUSTINTOWN, Ohio -- Head Coach Scott Donaldson and wide receiver Maceo Matthews Jr. are among the 15 members of the Heidelberg University football team who received All-Ohio Athletic Conference honors, as announced by the league on Tuesday.  Donaldson received the Larry Kehres Coach of the Year award and Matthews Jr. won the Ed Sherman Award, given to the top receiver in the OAC.

In a departure from the standard first team/second team/honorable mention format, the league announced a list of All-OAC honorees and honorable mentions.  Heidelberg had eight players on offense and six on defense earn the conference honor.

Donaldson led the Student Princes through an immensely tumultuous year.  Navigating the uncharted waters of COVID-19 protocols and working through the grief and despair following the passing of Curtis Helman, Donaldson was a steady leader for the 4-1 Student Princes.  His team retained the Rhine River Cup, regained the Bendo Bowl trophy, and won the OAC West Division.

Penick, now a two-time all-conference player, was another dangerous target.  He had 23 catches for 297 yards and three touchdowns.

At tight end, Nick Cofer grabbed All-OAC honors for the second straight year.  Cofer had 23 receptions for 231 yards and a touchdown, and helped block for the talented 'Berg backfield.

Montavious Yearby is another repeat all-conference performer.  Tayy rushed for 512 yards on 72 carries -- an average of 7.1 yards per attempt.  He picked up four touchdowns on the year.

While Yearby tried to run around the defense, Grossman tried to run directly through it.  He ended up with 193 yards and three touchdowns on 37 carries.  The all-conference honor is Grossman's first.

Quarterback Drew Sims earned honorable mention status after a stellar freshman campaign.  The Perrysburg native threw for 1,454 yards -- 290.8 per contest.  He was 100-for-165 with 16 touchdowns and five interceptions.

On the offensive line, Kyle Martin and Wally Kalinowski were part of a stalwart force in the trenches.  The Student Princes were a total of three yards shy of averaging 500 yards per contest.  Moving at break-neck speed, the offense averaged more than 40 points per game.  The OAC honor is the first for both Martin and Kalinowski.

From the hybrid 'Joker' position on defense, Blackiston is on the All-OAC list for the third time in three years.   This spring, he amassed 40 tackles -- including six for loss and four sacks.

Turek enjoyed a breakout season on the defensive line -- picking up five tackles for loss and three sacks.  He caught the errant lateral attempt on the final play of the Bendo Bowl win over Ohio Northern.  The honor is the first of his career.

Richmond, the man some call "Black Lightning," earned his first all-conference nod at linebacker.  He had a sack, 16 tackles, and a forced fumble on the year.

Smith, an honorable mention, was also an All-OAC performer in 2019.  On defense, the linebacker had 23 tackles in four games, including 2.5 tackles for loss.  As a punter, Smith averaged 40.2 yards per punt, with a long of 53.  He did not allow a touchback all season.

In the secondary, cornerback Tramon Wiley earned a spot among the league's best for the second straight season.  Wiley had 20 tackles and broke up three passes.

Safety Mike Warden capped off a memorable career with his first-ever all-conference selection. Warden, also a member of the 2019 baseball team which advanced to the NCAA Division III World Series, had two interceptions and three pass breakups.

The 14 All-OAC player selections are the most since 2013.