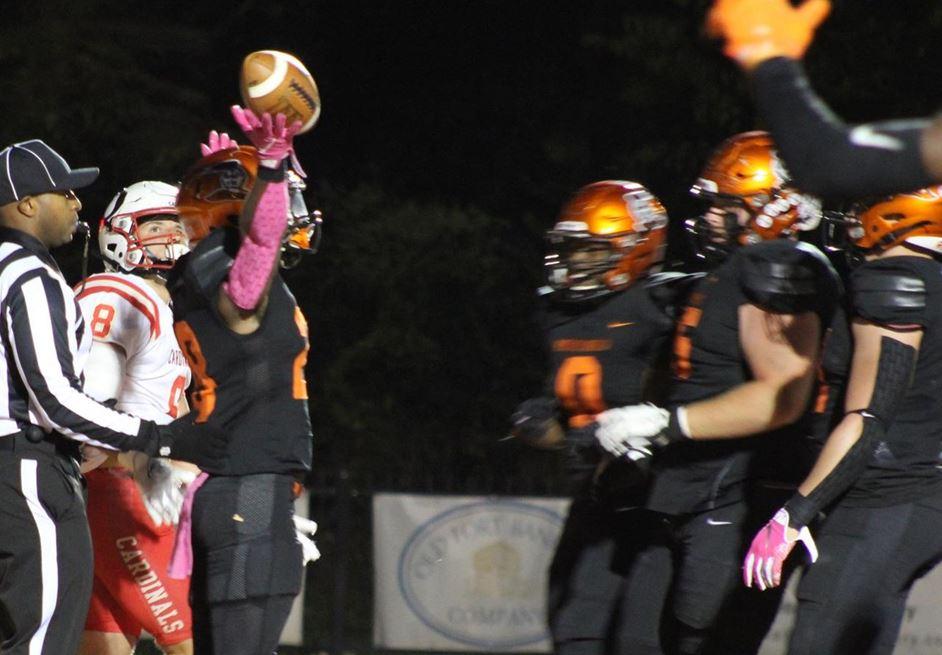 It was a milestone win on a memorable Homecoming night. The Heidelberg football team earned its 500th win in program history with a dominant 52-19 win over rival Otterbein on a brisk, but boisterous Saturday night at Hoernemann Stadium.

The resounding victory also pushed the Student Princes into the lead in the traveling trophy Rhine River Cup. With 30 games played in the series -- which kicked off in 1992 with a 7-7 tie in Frankfurt, Germany -- Heidelberg holds a 15-14-1 edge. It's Heidelberg's first lead in the series since 1999.

Montavious Yearby had three touchdowns and the 'Berg defense had three interceptions in the victory that pushed HU to 4-1 on the season.

On 3rd-and-4 during the ensuing drive, Easton St. Clair picked off his third pass of the year and returned it to the Cardinal 20. Three plays later, 'Berg QB Drew Sims found Brandon Reed for a touchdown.

Early in the second quarter, Otterbein got on the board with a seven-yard scramble from quarterback Bryce Hall.

Undeterred, Heidelberg scored two plays later. Yearby caught a pass out of the backfield and simply outran everyone for a 70-yard strike.

Forced to punt on the ensuing possession, the snap sailed over the head of the Otterbein punter. Darrion Thomas came off the edge and pounced on the ball in the end zone for a touchdown.

Tramon Wiley preserved Heidelberg's 31-13 at halftime, blocking a field goal in the closing seconds of the period.

With the ball to start the second half, Heidelberg scored quickly.  Again, it was Yearby -- this time a 47-yard touchdown rush on the second play from scrimmage.

After Otterbein scored, HU struck again. Theodore Tate scored his first career touchdown, hauling in a 29-yard pass from Sims, who was 11-for-22 for 260 yards and three scores.

Otterbein's next drive stalled on the HU 10 yard line, which is where the Tricolor embarked on an eight-play touchdown drive. Jace Grossman scampered in from three yards out. Steckel's seventh PAT of the day gave HU the 52-19 lead, which is how the game ended.

The defense held Otterbein off the board in the fourth, with Wiley and Thomas picking off passes.

Yearby finished with 125 yards and two touchdowns on the ground, two receptions for 89 yards and a score in the air, and one kickoff return for 43 yards.

Defensively, Griffin Pendry had a game-high 10 tackles while Zach Blackiston added 2.5 tackles for loss, including 1.5 sacks.

The Student Princes face No. 4 Mount Union at home next week. Kickoff at Hoernemann Stadium is slated for 1:30 p.m.