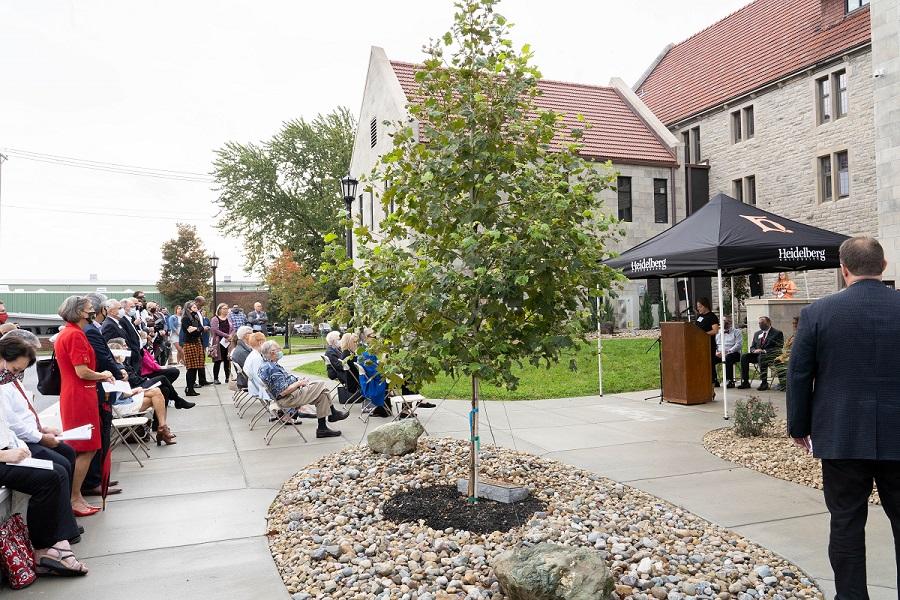 Celia DeTray now knows what her grandmother means when she says that every time she walked into France Residence Hall as a student, “she felt as if she was walking into a castle of limitless adventures.”

A junior music education major, Celia represented all of the France’s residents as well as Heidelberg’s Greek societies at the dedication of the newly restored and renovated facility. Now, as an RA in the all-women’s hall, she gets to walk into France every day and serve as a resource for other students, just as her grandmother did.

“The original woodwork and beautiful staircase remain in place. Every time I walk through the front doors, I am greeted by all of this amazing history,” Celia said. “The building, in general, is very modern and quite enjoyable to be in.”

She also noted the amenities that France residents are enjoying, such as comfortable lounges and kitchenettes. The France parlor and its great room were retained and restored, providing current residents with a taste of the hall’s history.

Since it reopened to residential living this semester, France has hosted a number of successful student events. Additionally, the members of Heidelberg’s Greek societies are really enjoying their new meeting space, all under one roof.

“It’s been amazing to walk down the hall and see the other (Greek) halls and learn about the traditions of the other groups,” said Celia, a member of Delta Sigma Chi. “This expansion of my experience with Greek unity honestly would not have happened if the halls were not as close as they are now.”

When planning for the France project began about 8 years ago, the vision was clear: Create a space that combined women’s living, learning and leadership. One way to achieve this was to incorporate two faculty apartments into the building.

English professor Dr. Nancy El Gendy now occupies one of those apartments. It’s the first time she’s lived on campus, and already, she’s experienced a richness that the opportunity has provided for her and for students as well.

“So far, it’s great. I love it,” Nancy said. “I find being surrounded by students very energizing and inspiring. As an international faculty member, it brings me feelings of warmth and security and belonging to the larger campus community.”

Huge thanks to donors

For Kim, who represented all of the generous donors during the dedication, it was about paying it forward. In her remarks, she noted that she has no personal connection to France, “however I do believe in giving to Heidelberg.”

Motivated and inspired by her granddaughters, Kim said she was drawn to the project as a way to pay it forward and set up future women students for success.

“What better way to attract students to Heidelberg than a beautiful building like France,” she said.

As a local businesswoman, Kim understands the importance of making first impressions, and she believes France will do exactly that for prospective students. “Students are Heidelberg customers and we want the best for them. We want to make a great impression,” she said, adding that she believes the restored France will enhance the student experience and open opportunities for students who might one day also pay it forward.

In recognizing and thanking the 147 donors “who all matter in our effort,” Rob noted that he and his wife, Susan McCafferty, also participated in France fund-raising as a deeply personal way to honor their mothers, Ceil Huntington and Pat McCafferty.