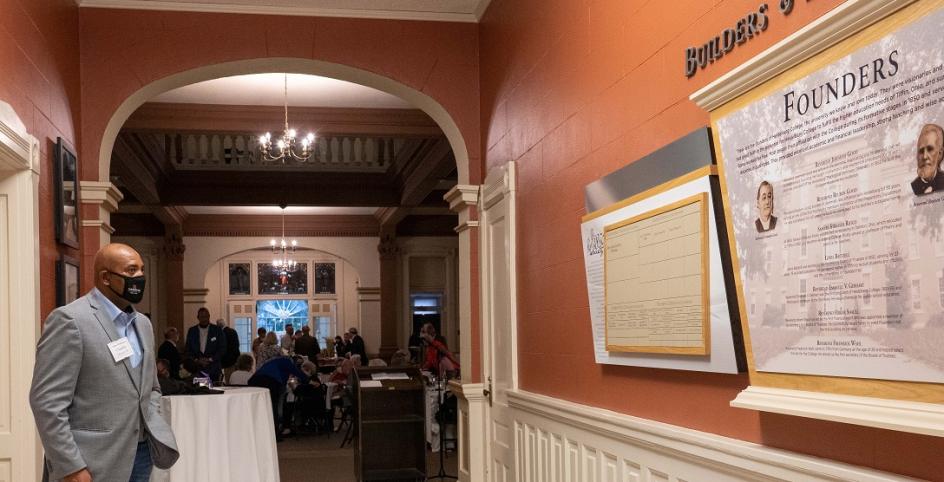 Consider these two facts: In the first 160 years since Heidelberg’s founding (1850-2010), fewer than 40 benefactors could be credited with cumulative lifetime giving exceeding $100,000. By 2013, a total of 17 benefactors had provided cumulative giving of over $1 million to Heidelberg and were welcomed into The 1850 Society.

And now this: In the eight years since the Heidelberg Builders & Benefactors recognition society was launched in 2013, the number of donors with cumulative lifetime giving from $100,000-$999,999 has risen to 161 in The University Society and the number of $1 million-plus 1850 Society donors has grown to 28.

We’ve come a long way, and it’s been an incredible journey, marked with the first-ever benefactors exceeding $10 million in lifetime giving and Heidelberg recently receiving its largest-ever gift.

The tremendous generosity of these Builders & Benefactors donors, and all Heidelberg donors, has improved the University significantly in recent years.  We must go forward with that same generous spirit to make Heidelberg even stronger and more sustainable in the future.

“It’s amazing what takes place here,” Phil said. “We are so grateful for those of you who support and sustain us, who share your passion for where Heidelberg should be going. It’s an incredible journey.”

As she did at her husband’s inauguration in 2009 and at prior Builders & Benefactors receptions, Dr. Susan McCafferty read her original poem entitled “Bricks and Pearls.” It expresses the spirit of this special occasion by describing the Builders who “came here … to build a college … when they reached this site … one brick at a time” and the Benefactors who “are a string of pearls … stand on this spot … continue to build … one pearl at a time.”

Noting that Susan’s beautiful poem has more meaning for him now than 12 years ago, President Rob Huntington added his deep gratitude for all Builders & Benefactors. He spoke eloquently about the two very special benefactors who set the standard: Trustee Ralph & Joan Swinehart ’68 Talmage and the late Trustee Frann Zverina ’74.

Ralph and Joan Talmage are the first and only members in the Builders & Benefactors 1850 Society Transformation Circle, the highest recognition level, for donors whose lifetime giving exceeds $10 million.

“They have given so much advice and so much money in support of this school. It’s incredible,” Rob said.

As long-time supporters of The Heidelberg Fund, the couple has stepped up in numerous meaningful ways, including a gift that enabled the financing for Talmage Residence Hall which they reluctantly allowed to be named in their honor, the Beeghly Library renovation, the lower parking lot renovation, and the France Residence Hall Restoration and Renovation Project. Joan was the first and leading woman of six “great women of generosity” – along with Sondra Gerhardt Libman ’67, Kim Newman MAE ’90, Edda Izzo Owen ’62, Trustee Susan Wolf ’71 and the late Frann Zverina ’74 – to provide lead funding for the France project.

“Ralph and Joan’s names are together on the (recognition) wall, and that really matters!” Rob said.

Frann Zverina described her Heidelberg academic experience as “OK.” As a multi-sport student-athlete, she admittedly “did not excel.”

Throughout her lifetime, though, she developed a philanthropic spirit for Heidelberg – lending a voice that supported “equal opportunity, speaking up, going big and making a difference,” according to Rob.

Frann devoted a lot of her time, talents and treasures to organizations in the Cleveland area where she lived. In 2011, however, her involvement with the Fellows Advisory Council (which later merged into the Alumni Council) led her down an important new path with her alma mater.

Her involvement with Heidelberg grew in parallel with her giving to The Heidelberg Fund. In 2015, she was moved to lead the campaign to create a softball field adjacent to the baseball field at Peaceful Valley, providing more than half of the funding for Frann’s Field. Then, in 2017, she said yes when Executive Director of Alumni Engagement and Major Gifts Ashley Helmstetter asked her to be a lead donor for the France Hall project.

Rob recalled a very special moment for Frann: In 2017, she fulfilled a dream that in her heart, she never thought would happen when she was elected to the Board of Trustees. “It was the thrill of a lifetime for Frann,” he said.

Around that same time, Frann was diagnosed with cancer and eventually had to withdraw her involvement from ‘Berg activities. Alumni Council and Board of Trustee friends such as Chad Breeden and Kim Newman rallied around her, standing in but always noting their roles were temporary.

“It was the greatest year of her life because she loved Heidelberg so much,” Rob recalled. “And of course, it wasn’t temporary,” Rob recalled. About a year later, and one week before she was to have been inducted into the Heidelberg Athletics Hall of Fame, Frann succumbed to cancer in October 2018.

Prior to her passing, she was able to travel to Heidelberg one last time. The purpose of the visit was to share her estate plans with Rob and Ashley. They learned during that visit in August 2018 that Frann had designated approximately 90% of her estate to her beloved Heidelberg.

When Frann’s estate was settled earlier this year, Heidelberg received nearly $7.8 million -- the largest single gift in our history.

As the donor who contributed the second-largest lifetime giving total to Heidelberg, Frann now joins Trustee Emeritus John Q. ’58 and Patricia Adams and the late Edson Brown ’49 as the only three members in the Builders & Benefactors 1850 Society Vision Circle for donors whose lifetime giving is $5,000,000-$9,999,999.

“Frann’s gift will make a humongous difference in her permanent legacy to this school!” Rob said.

During the celebration, senior theatre major Gavin Buurma spoke with the Builders & Benefactors about his outstanding experience as a ‘Berg student. Gavin has seized every opportunity the School of Music & Theatre has offered, from performer to stage manager to director, traveler to arts administrator to author.

Gavin noted such highlights as the Concert Choir’s magnificent trip to Prague, the Theatre’s trip to Scotland, many leading roles on the Gundlach Theatre stage and equally important roles behind the scenes. Through all of these, he said, he has grown immensely as a performer and an individual.

“That young kid from Willard, Ohio, growing up only half an hour away from campus, could never have imagined he would have opportunities like this,” he told the Builders & Benefactors. “And none of it would have been possible without the support of our donors.”

“Heidelberg has allowed me to explore my passions and grow from that naïve young kid who had no idea what he was doing into, all of a sudden, a grown adult with a vision for what he wants out of life and an effective plan for how he will get there,” Gavin added. That plan includes working his way up in the industry in arts administration, marketing, management, performing, acting and teaching. Part of the plan also includes getting his MBA from Heidelberg through the PlusOneAdvantage® Program.

“None of this would have been possible without every single one of you. I am forever grateful,” he told the donors.