On Veterans Day, Heidelberg to honor a hero alumnus 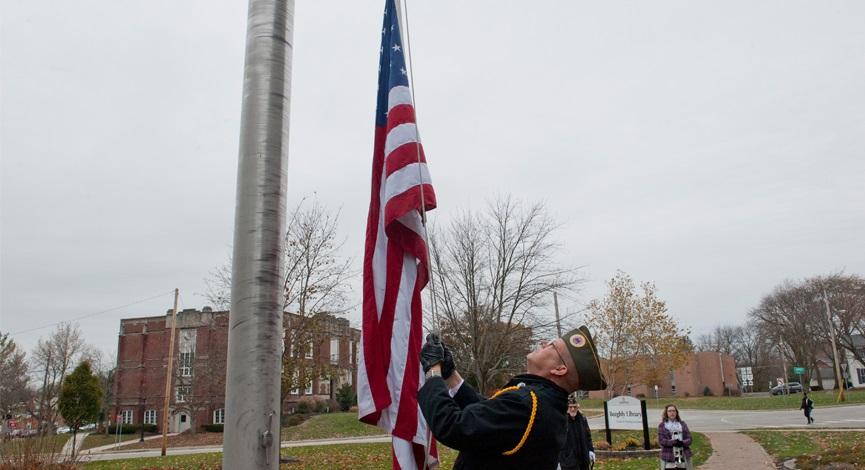 This year on Veterans Day, Heidelberg will honor a true American hero: Marine Second Lt. James L. Tangeman, the only known 'Berg alumnus to have been killed in action during the Vietnam War.

Heidelberg’s Student Senate is planning the Veterans Day ceremony at 11 a.m. on Thursday, Nov. 11, in front of Beeghly Library. The campus community is invited to attend this annual event honoring all veterans and especially those who made the ultimate sacrifice.

By all accounts, Tangeman, ’67, was a standout basketball player at Heidelberg, a decent golfer and to those who knew him, an all-around good guy. He also was an American hero, courageous to the end. He is among the 57,939 Vietnam veterans memorialized on the Vietnam Memorial in Washington, D.C.

Decked out in his dress whites, Tangeman received his officer’s commission on the same day he graduated from Heidelberg, June 11, 1967. But years before, he made an impression on the hardwood. An all-state high school athlete, he opted to enroll at Heidelberg in 1964. He was a pure shooter and scorer, best remembered as a tough competitor who scored the winning basket in a game against rival Baldwin Wallace.

In the summer of 1965, Tangeman enlisted in the USMC Officer Candidate School. The following year, he went to basic training at Parris Island, South Carolina. Following graduation, he attended basic school in Quantico, Virginia, and artillery school at Fort Sill, Oklahoma. That next summer, he was in Vietnam.

On July 29, 1968, Marine Second Lieutenant James L. Tangeman stepped on a land mine and was killed. He was 23.

He left behind his parents and three younger sisters who missed him dearly. So, too, did his Heidelberg friends, Student Prince teammates and Nu Sigma Alpha fraternity brothers.

In addition to Tangeman’s surviving family members who plan to be in attendance for Heidelberg’s Veterans Day ceremony, the keynote speaker will be Vietnam veteran and alumnus Ron Willoughby, ‘68, who was a sniper during the Vietnam conflict and who is featured in the book, 13 Cent Killers: The Fifth Marine Snipers by John Culbertson.

The annual ceremony also will include performances of the National Anthem, Lift Every Voice and Sing, a welcome from Dean of Student Affairs Chris Abrams, the playing of Taps and a 21-Gun Salute by local veterans.