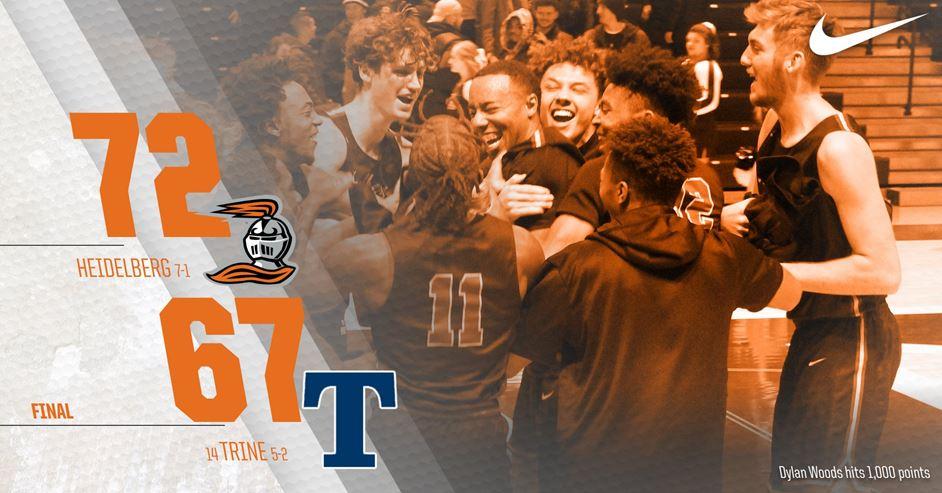 A big moment, and an even bigger win.

On the night Dylan Woods became the 33rd player in school history to hit 1,000 career points, the Heidelberg University men's basketball team toppled No. 14 Trine, 72-67, at the MTI Center.

Keeping in line with his calm demeanor, Woods joined the 1000-point club in unassuming fashion early in the second half.  The senior from Cincinnati pivoted in the paint, laid the ball up and in, then calmly jogged back on defense with a smile of relief and flashing a subtle "1000" with his hands.

"It felt really good to get that win.  Trine is a great team and it was a great atmosphere," said Woods after the game.  "It felt good to get to a thousand, but I couldn't have done it without all my teammates through the years."

Isaiah Young had a team-high 13 points and was one of three in double figures for Heidelberg, which improved to 7-1 on the season.  Woods had 11 and Emmanuel Perdue had 10.

Foul trouble in the first half set the Student Princes back.  A layup by Brandon Hughes tied the game at 20 with just over seven minutes left in the first half. The hosts, however, regained control with a 17-4 run over the next five minutes.  A 3-pointer by Young stopped the bleeding for Heidelberg, who went into the locker room trailing 37-28.

Woods' milestone bucket on the first possession of the second half and a three-point play from Perdue helped Heidelberg surge back to within four at 41-37.  The Thunder stormed back and pushed their lead back to 10 at 49-39.

Triples by Zane Leitwein, Nakhi Taylor and Tre Watkins highlighted a 14-3 run for the Student Princes -- with Watkins' deep 3-pointer giving HU their first lead at 53-52.

With 4:34 left, Perdue muscled his way to a layup that put the Tricolor ahead 64-59 -- their biggest lead of the game.  Trine scored the next six points, taking a brief lead.  Heidelberg answered with a layup from Seth Hohman off a feed from Young.

A fast-break layup off a turnover gave the lead back to the Thunder with less than two minutes to play.  After teams traded turnovers, a put-back by Eric Panning gave HU a one-point lead with 1:01.

The 'Berg defense forced a shot clock violation on the ensuing Trine possession.  After a timeout, Young beat the press and found Panning alone under the basket for an easy dunk with 20.5 seconds left.

After Trine came up empty on their possession, Leitwein grabbed a rebound and was fouled.  He sank both free throws, giving HU the 72-67 lead.

Heidelberg withstood a 26-point barrage from Trine's Nick Bowman, who led all scorers.

The win was Heidelberg's second in a row over a ranked opponent, following Saturday's win at No. 12 Mount Union.

Heidelberg returns home and jumps back into OAC play on Saturday as the Berg hosts Wilmington for a doubleheader.  The women's game will start at 2 p.m., with the men's game to follow.  Tickets are available at BergAthletics.com/tickets.