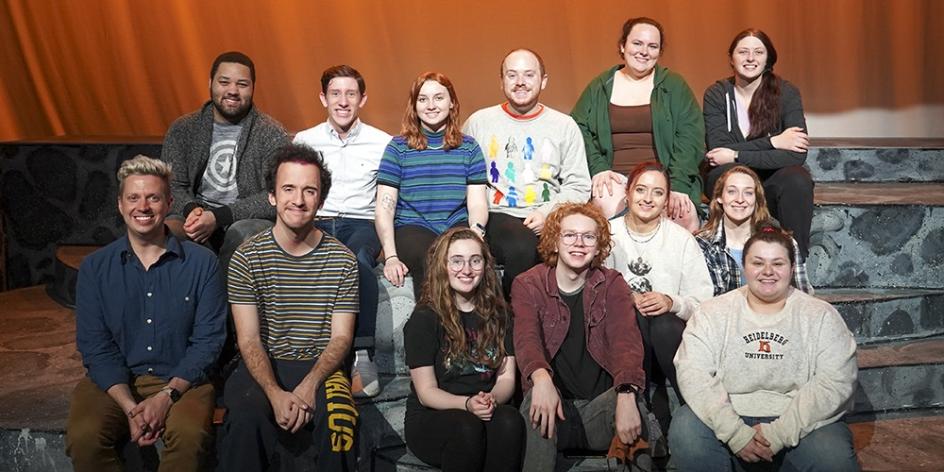 Sixteen Heidelberg students traveled to the Southeastern Theatre Conference (SETC) in Memphis, Tennessee, during spring break to get a taste of the professional world of theatre. Not surprisingly, the ’Berg performers were highly successful in coming home with summer internships and full-time employment during the conference’s job fair.

Of the 16 students who attended SETC, all 16 got job offers and summer internships as a result of the conference.

SETC is an annual conference and job fair for those pursuing careers in theater. Students and other young professionals have the opportunity to audition and network with each other, as well as their future employers, through competitions and performances. Impressed with the quality of the ’Berg performers, Geoff Burnett, the co-director of Long Lake Camp for the Arts, even reached out to Theater instructor David Cotter after the conference, looking for more Heidelberg students to hire.

Burnett said, “I was at the SETC conference this past week … I met some of your students and they were by far the best candidates we met. I am hoping to hire those we met there.” The theatre students represented the ’Berg theater program so well that Burnett asked that an unfilled job opening be shared “among your present and past students” as well.

Here is a series of reflections from some of the students who attended the SETC.

“My favorite experience at SETC was the Ten-Minute Play Festival. The festival was comprised of less than 20 actors, 8 playwrights and 8 directors.” Those playwrights had 10 hours to write a play explaining loss; they were assigned a director and went to work casting. The groups “put on the show later that night, starting and completing the show in less than 24 hours!” Zach explained that through this experience, “I was able to grow so close to my other actors, reaching very vulnerable places together, [and growing] as a performer!”

Zach’s biggest takeaway from the conference was a motto he often heard there: “Be all in.” The motto renewed Zach’s ability to “fully commit myself to my passion for the things I love, whether it be people, a future career or even daily decisions. I believe that making these decisions will be very beneficial for me to become an even more developed person and actor!”

“My favorite part of Memphis was getting to explore a new city with some amazing friends.” Chantress said. The group was able to “just be together in a place where theatre was present but we weren’t all stressed about it.” As for the conference itself, “My favorite part of SETC was the Ten-Minute Play Festival.”  Chantress, Zach, Bri Clark and Ben Pollizi all auditioned and performed in the Ten-Minute Play Festival. “We made new connections and got to know people who also participated that we never would have gotten to [meet] before.”

Chantress’ biggest takeaway from the conference was professional and personal skills. “SETC helped me learn how to talk to companies and how to do successful interviews.” Chantress received professional feedback and was able to refine her resume through her interactions at the conference. By the end of the trip, Chantress had received multiple job offers. “As for personal skills,” Chantress explained, “I realized my self-worth as an artist.”

“My favorite experience at SETC was being a part of the Ten-Minute Play Festival with some of my friends. I had not planned to do any acting while there; it was a spur-of-the-moment decision to audition. It was incredible to be a part of something that was literally built in a day.” The experience brought her closer to her fellow actors and helped build her confidence as an artist, she said.

Bri initially decided to attend in order to get more experience and was not expecting all of the job offers she received. “I was affirmed in the fact that the hours I have spent working as a scenic painter and scenic charge were worth it. I ended up with eleven job/internship offers for this upcoming summer from the event.” The experience also helped Bri learn about all of the quality opportunities that exist, even in Ohio!

Isaac’s favorite part of the trip to Memphis was “getting to know people more than before, outside of work, [and] seeing people that are so passionate about the things they are able to create.” The experience he gained at SETC helped encourage his passion for theater and built his relationship with his fellow actors.

The conference also helped build up Isaac’s confidence to try new things. “Even if you seem to fail at an aspect of your life you can still find a way to do what you want to do,” Isaac said. This encouragement will help Isaac go bravely forward as he continues his theater career, and has helped him realize all of the jobs available in the theater world.

“Best part of Memphis: The food was killer! 11/10. And getting to spend time with my peers,” Ben said. Beyond the good food and good company, Ben’s favorite part of the conference was “the chance to be fully immersed in a place where I could discover and learn and grow as an artist surrounded by my peers and other like-minded people in the industry.” Through the conference, Ben made great connections, and “got the chance to do my first professional audition for acting (and had some callbacks)!”

Ben’s biggest takeaway from SETC was to “continually be involved and engaged in your craft and creating art.” The experience taught Ben to “do at least one thing a day that furthers your craft, and never stop working!”

Lizzie Bowman
Senior musical theater major
Credit: Agnes in “She Kills Monsters,” Jen in “The Cake” and Ella in “Cinderella”
Job: Still deciding between two positions: wardrobe intern in New York or assistant to the Artistic Director, costume designer and performer in Ohio

“I loved talking with all of the different theater companies in a more relaxed interview environment,” Lizzie said. “I had a particularly great talk with a company that went so long I got another interview call in the middle, so I came back later to finish up with them. [They] asked me to apply when I was out of school and it was a great experience.” Her favorite part of Memphis was the Bass Pro Shop – “I walked back and forth from the convention center and the shop a couple times.”

Lizzie’s biggest takeaway from the convention was to keep applying and following up with programs of interest. “I learned to not let a bad interview get you down and to be quick on getting back with applications. I also learned that companies are much more willing to work with you and your needs than I originally thought.” In some of the programs Lizzie interviewed with, “they know that you are a beginner in the profession and there to learn,” which helped relieve some of the interview anxiety.

Gavin has attended SETC a few times before. “In the past at SETC, I was solely focused on getting a summer job/internships. I would go spend all of my time at the Job Fair and would get very overwhelmed quickly. However, this year I decided to be more proactive about doing workshops and I had an even more incredible time. I took dance classes on Fosse & Yoga, and even took a class on using theatre as a form of therapy.” This helped Gavin enjoy the experience all the more.

Although he tried to focus more on the workshops offered at the conference, Gavin was still not without job offers. “As of the end of March, I have gotten six job offers which is always a worry, but all of these professional companies are thoroughly impressed with the work we do at Heidelberg.” Some were so impressed with him, in fact, that they changed their job offers to better suit his experience. The position he accepted “was originally only looking for Assistant Company Managers, but were so impressed by my resume that they offered me the head position.”

“My favorite experience from SETC was going around the design competition.” Hannah has lots of experience in costume design and was happy to see what other designers were up to. “I did get the chance to look around at some of the amazing designs. I really hope when I go to grad school, I can showcase my work in that way.”

Hannah’s major takeaway from the conference was to keep applying. “You need to keep applying for jobs in order to get one. I spent most of the days at SETC applying and it helps.” Through showing off her design work and other theater experience, Hannah received several offers.