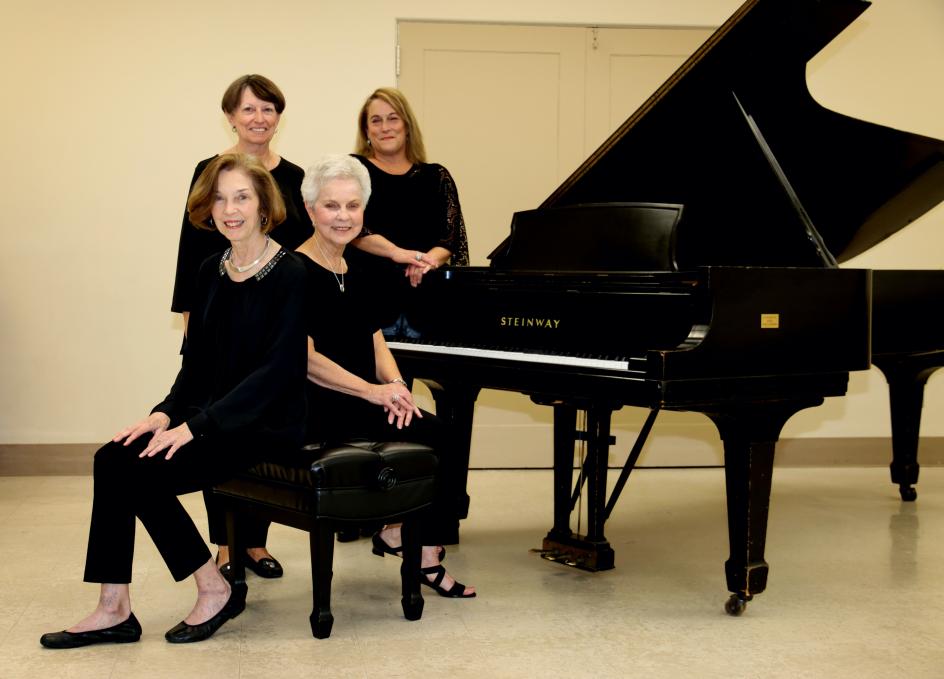 What could be better than two hands on one piano? Eight hands on two pianos! An ensemble of local pianists will perform a benefit concert, Piano-stachio, at 3 p.m. Sunday, Sept. 25, in Ohl Concert Hall on the campus of Heidelberg University.

The eight hands of Piano-stachio belong to Char Pope, 'Berg Professor Emerita of Music Dr. Vicki Ohl, Sally McDonald and Mimi Lange Johnston. For the concert, they will be performing a series of comforting songs, including renditions of “Danny Boy,” “Over the Rainbow” and the “Scott Joplin Rag Rhapsody,” among many other familiar tunes.

According to the members of Piano-stachio, COVID gets credit for the formation of their ensemble during the early days of the pandemic. Pope had begun offering piano solos or collaborations online every day for three months until June 2020. After that, she found an excellent eight-hand arrangement of “Stars and Stripes Forever” to post on July 4, as well as three willing and talented partners. Thus, Piano-stachio was formed. None of the pianists had any idea how much fun they would have or that they would still be playing together and posting recordings two years later.

And that brings them to their concert to benefit Berg Bravo! Friends of Heidelberg Music. Their repertoire includes a series of holiday-themed tunes and lullabies, with some arranged by Ohl and Pope, along with such favorites as Bach’s “Jesu, Joy of Man’s Desiring” and “When the Saints Go Marching In.” They also will perform a medley of Top Forty selections, including “Heart and Soul/Blue Moon, As Time Goes By, Take Five and the arrangement of “Stars and Stripes Forever.”

The members of Piano-stachio have a history in service and education across town, and often incorporate their musical talent into their community-building efforts.

Char has been an active member of the Tiffin community for 45 years, during which time she taught at Tiffin City Schools, performed around town, and published two albums of original piano pieces and arrangements.

Vicki retired from her career as a professor of piano and music theory for Heidelberg University in 2019. She plays piano occasionally for church, regularly with her friends in Piano-Stachio and uses her theory skills to help produce arrangements for the group.

Mimi has a notable musical career which has included working with major artists across the country. She has written, produced and sang award-winning jingles. Today, she serves as director of the Franciscan Earth Literacy Center.

Tickets can be purchased online at gundlachtheatre.org. Tickets are also available by calling Pat Page in the School of Music & Theatre at (419) 448-2073. General admission is $10. Tickets for Berg Bravo! members or those who would like to stream the concert are $5.