A celebration of excellence, in and out of the classroom 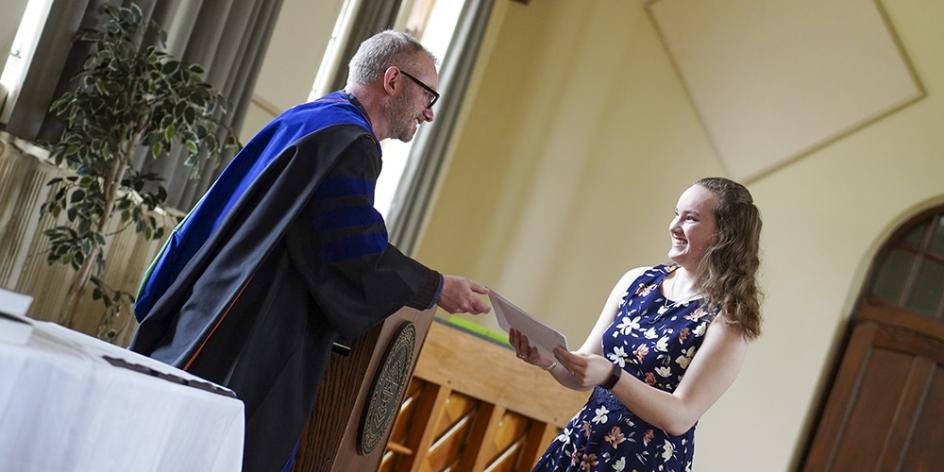 Huge congratulations to all of the students and staff members who were honored for their achievements inside and outside of the classroom at the annual Student Awards Celebration on Friday, April 22.

Bernae DySart and Em Swain are this year’s recipients of the Daniel J. and W.J.K. Snyder Price, awarded to the two top graduating seniors who faculty have judged to have excelled during their four years at Heidelberg in leadership based on character and scholarship. Wednesday Conley was this year’s recipient of the Berghalter Memorial Award, given to a student who best exemplifies the spirit of the Good Samaritan.

Graduating senior McCartney Betz was chosen to give the student remarks at the celebration. She titled her speech Imposters? Sus. It was a nod to Among Us, a game that took off during the pandemic, in which there are “imposters” and other players have to figure out their identities. McCartney covered her experience at Heidelberg, particularly in regard to Imposter Syndrome, describing her remarks as “an inspirational pep talk about relying on others and trusting oneself.” In it, she delivered the now-famous closing line, “Haters gonna hate, potaters gonna potate, I’m just glad we get to graduate!”

Here is a list of this year’s award recipients as presented on Friday: