Allyson Lyle: 'Suffice to say that I didn't start as a paralegal' 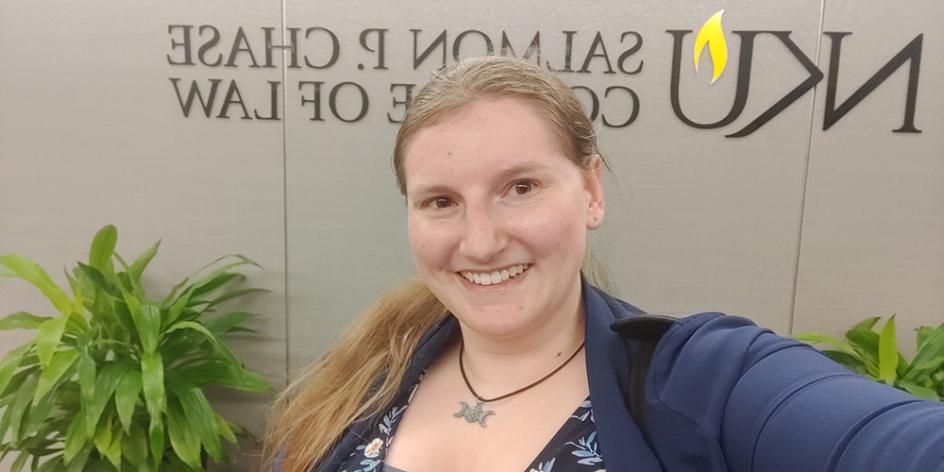 Allyson Lyle is a Heidelberg alumna from the Dayton, Ohio area. She graduated from Heidelberg in December of 2019, having majored in criminology with a minor in psychology. Allyson always excelled in school, even before college. Her determination and academic success earned her many opportunities, including the opportunity to intern at the law office of Jane A. Short, in Lebanon, Ohio, during her undergraduate years.

And just two weeks ago, she began attending Northern Kentucky University Chase Law School. She works full time during the day, and attends classes a few evenings every week – and will continue to do so for the next four years as she pursues her law degree aspirations. While she could continue to work in firms without a J.D., recent political events have pushed her to make the decision to defend human rights – a decision that starts with a solid education.

Working and learning is not all that Allyson does. She currently lives with her romantic partner and their dog in a condo while they go through the process of building a house. She reads, hikes, and spends time with her family in the little free time that she has now. In the Dayton and Cincinnati areas, she is supported by a community of like-minded people who care about human and animal rights, share her neo-pagan beliefs and encourage her in the pursuit of her passions.

When you graduated from Heidelberg, what were your expectations for how your career would go?

My expectation was that I would continue to work at Walmart until I could find a starting position at a law firm. Originally, I expected to start immediately as a paralegal or legal assistant, with the aspirations of eventually becoming a lawyer someday.

How did reality differ from those expectations?

Suffice to say that I didn't start as a paralegal like I had hoped. I started at Suhre & Associates as a receptionist, but then transitioned to a paralegal position after having been there almost a year. The biggest difference in my expectations, however, was that I didn't need to know everything to start. I didn't have to know how to file a written plea, or even know what one was. They taught me all of that on the job, which was a huge relief.

Can you describe how you came to the decision to go to law school?

The decision to go to Law school has been something I've mulled over since I started my undergraduate degree and particularly throughout the time I've worked in the legal field. I wasn't sure I was ready to make the commitment and take on the additional debt. However, it was when I heard about the Supreme Court's decision to overturn Roe v. Wade, that I made my decision. It was then that I realized I had to do something because I felt my equality, and that of others, was in jeopardy. And the way I wanted to go about making a difference would require attending and completing law school.

So, what kind of law are you interested in practicing at this point?

At this point, I'm not sure. I'm interested in three areas, all of which I've gotten a taste of through my work experience: Estate Planning, Criminal Defense, and Tax Law. But, I also want to focus on an area that will help me pursue my end goal, which is to work in a governmental position where I can influence policies and law. I expect that I'll figure this out as I learn more through my studies and speak with my professors.

Where do you see yourself in 5 years?

In 5 years, I hope to have graduated from law school, passed the bar exam, and begun working in my first attorney position. I also see myself living with my partner in our new house with our current dog and a few extra dogs and cats.