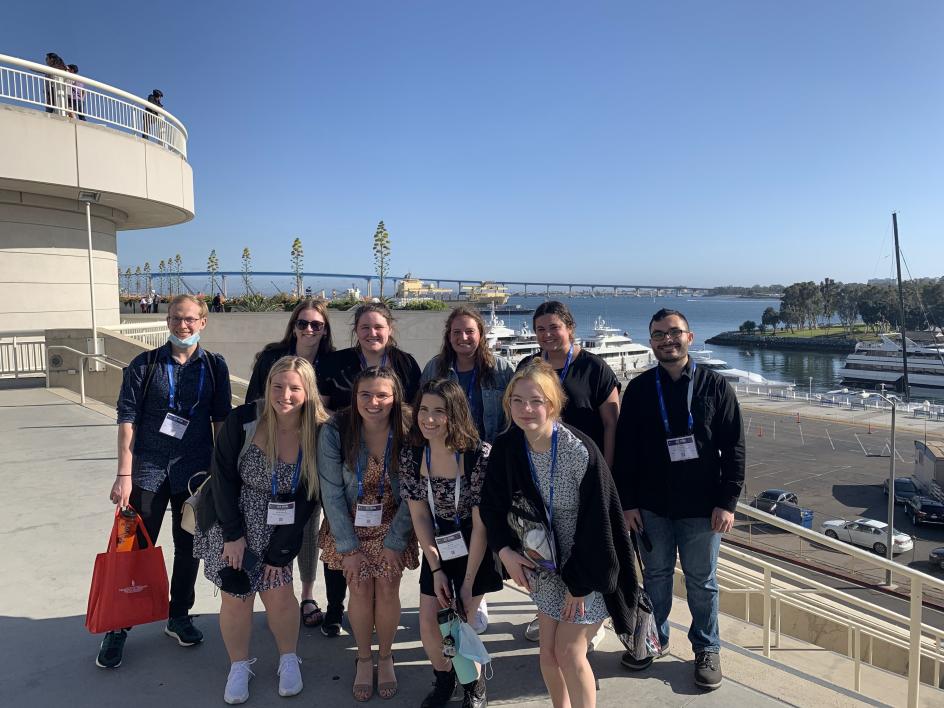 Thanks to a travel grant, a total of 12 Heidelberg students, representing a cross-section of science majors, along with their professors, Dr. Nate Beres and Dr. Aaron Roerdink, recently returned from San Diego, where they attended the annual spring American Chemical Society (ACS) conference. Funding for the travel and conference experience was provided by the Joseph and Brenda Stearns Chemistry Conference Endowment and a small grant from ACS.

The ‘Berg students – many of who are members of the Chemistry Club – weren’t just onlookers. They were active participants, networking and presenting research. Junior Courtney Temple presented her research and a poster, based on work conducted in collaboration with Aaron. The title of her presentation was “Use of Performance Enhancing drugs by East German Athletes in the Olympic Games from 1968 to 1988.”

Although presenting at the conference was nerve-wracking, it was also fulfilling for Courtney, who said, “I had been working on this research since my freshman year with Dr. Roerdink so to be able to finally present everything we accomplished was truly such a great feeling.”

Other students who presented at the conference included Lauren Mussig and Kayla Buck, who -- after COVID-19 delays -- finally got to present their research on Nitric Oxide Releasing Bandages. Maddie Deiderick, Lauren and Kayla also participated in a poster session on Heidelberg's Chemistry Club. As a group, the 'Berg students were in attendance when their professor, Dr. Roerdink, presented his educational research on resources used in general chemistry.

As a group, the Heidelberg students were recognized at an awards reception, during which the Chem Club received a Commendable Award from the ACS.

All of the students got to connect with other scientists from different backgrounds and share their fascination of science. Also attending the conference from Heidelberg were Nick Hausman, Nathan Kunzler, Maddie Newby, Hannah Huthmaker, Crimson Stuckert, Brynlee Vermillion, Alexis Kirkendall and Jessica Harness-Koehnle.

In addition to attending sessions, the students had the opportunity to network and to apply classroom learning to real-world situations, and for some, that was a real confidence builder. “I was able to see how the things I have been learning in the classroom for the last three years have prepared me to understand difficult research topics, and that was truly motivating,” Courtney said. “It also allowed me to gain confidence in myself as I was presenting research at a national level for the first time, and that can be scary!”

The ‘Berg delegation also had a great opportunity to connect with two young alums who benefited from Chem Club experiences and travel as undergraduates. It was great to meet up with Kevin Scrudders, ’19, a Ph.D. candidate in biochemistry at Purdue University, and Kellen McGuire, ’21, a Ph.D. candidate in chemistry (organic focus) at Old Dominion University, who spoke about their grad school research and graduate studies in general.