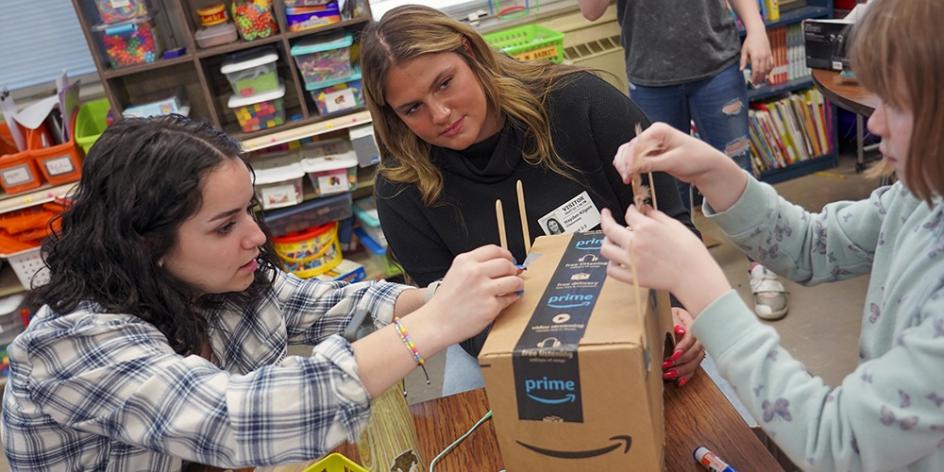 Dr. Stacey Pistorova’s Integrated Arts in Early Childhood Education class has partnered with Jennifer Gressman’s third-grade class at Tiffin’s Krout Elementary School to learn about architecture and fairy tales. The creativity was flowing Thursday when the two groups of students met to collaborate on their projects.

Krout students weren’t the only ones learning before this collaboration. The education majors also brushed up their fairy tale knowledge. Stacey wanted to be sure that her students were giving Krout kids correct information. “It is important to model that teachers have to do a lot of background research on their own to be able to facilitate quality learning experiences. I always say, 'You can’t teach what you don’t know,'” she explained.

By the end of the day, there was the bears’ house from Goldilocks, decorated like a bamboo forest for China. Another bear house was from Jamaica, brightly colored orange with a pool out front. The Three Little Pigs had three houses: the first had a steep roof pitch to keep the snow off and a Canadian flag; the second had a pyramid on top, so you knew it represented Egypt; and the third was made of brightly colored bricks, to designate the Bahamas. To illustrate the Three Billy Goats Gruff, the student teams built a suspension bridge from popsicle sticks, from Norway.

The project is part of the TEACH-n-STEAM initiative, a partnership between Heidelberg’s School of Education and the Tiffin City Schools. This initiative intends to support science, technology, engineering, arts, and math in K-5 classrooms. The partnership between Heidelberg and Krout helped to provide more direct support to the students in Jenny’s classroom for such a creative project.

Stacey added, “When engaging in more hands-on, integrated experiences having more support to facilitate is always good for teachers.”

Jenny and Stacey have worked together for the past five years on similar projects and recently traveled to Charleston, South Carolina, together to present at the Critical Questions in Education Conference.