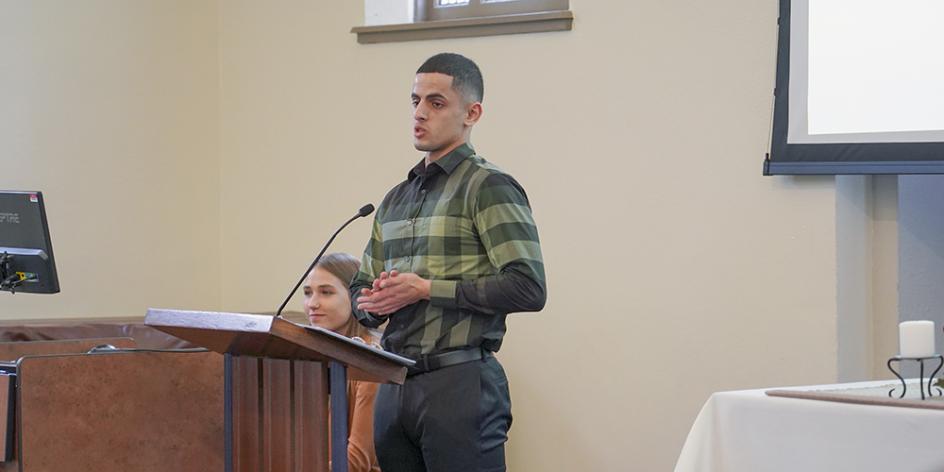 Even in death, three individuals – “silent teaching partners” – have given a rare and amazing gift to Heidelberg’s science students. These individuals, along with 18 others who came before them – are Heidelberg’s body donors.

On Thursday, Dr. Pam Faber’s Cadaver Prosection students carried out a tradition by placing hand-written notes of appreciation in an urn – an expression of their gratitude for the opportunity to study with the body donors in preparation for their future careers in the medical profession.

As part of their coursework, the students organized the annual Body Donor Appreciation Ceremony, with their professor’s guidance. They included personal testimonials, alumni testimonials and, by Zoom, participation by some of the families of past donors and Heidelberg benefactors who have made the opportunity possible through the years.

In his opening remarks, President Rob Huntington explained that Heidelberg’s Body Donor program is in its 35th year, under the watchful eye of Pam, who initiated it shortly after she joined Heidelberg’s faculty in 1987. In that time, the Biological Sciences Department has hosted 21 donor bodies, including the three males who are on campus currently.

“A lot of benefactors have driven this forward, year after year, decade after decade,” Rob said. He specifically noted Dr. George Barlow, Pam’s predecessor, alumnus Dr. Jim Getz, alumni Dr. J.C. and Ellie Hoffmeier, and alumna and Trustee Dr. Susan Wolf, who ultimately created an endowed fund to secure donors and equipment for the lab on an ongoing basis.

Describing the Body Donor program, Rob called it “a very distinctive, very dynamic and extremely differentiating feature for us.”

Indeed, current and former students who have had the privilege to study using the body donors would wholeheartedly agree.

Chayce Schaub ’22, currently in his first year at The Ohio State College of Dentistry, spoke via Zoom about the advantages he gained in grad school from studying with the body donors. “I had so much prior knowledge going in,” he said, adding that he taught some of his classmates the terminology he learned from the lab. He noted that only about 10 percent of his classmates got to work on actual bodies as undergrads.

The rare opportunity, Chayce said, “will surely teach you more than anything you read in a book.” He also credited his professor for instilling in her students a deep respect for the body donors.

Senior Courtney Temple – who has known since she was a child that she wanted to be a doctor – said, “It would be an enormous understatement (not to acknowledge) that the selfless individuals who have donated their lives for us to learn from have been a vital part of my journey at Heidelberg.” Courtney chose Heidelberg based on the hands-on experience she knew she’d receive in the Body Donor lab.

“I’m grateful for the opportunity in the lab and time spent with these wonderful people,” Courtney said. “I feel extremely prepared and so excited. Their story and their past are helping to shape my future.” She plans to start medical studies in radiology in July.

Clayton Bowden now has unique insight into his mom’s experience as a ’Berg student studying anatomy and physiology on her way to a career in nursing. Helen Bowden ’92 shared a testimonial about how her “unforgettable experience that built confidence in my biological knowledge.” For the past 23 years, Helen has been the school nurse at the County Board of Developmental Disabilities in Defiance, Ohio, working with students from ages 3-21.

Now a senior biology major himself, Clay now shares with his mom the “rare and amazing gift of learning (from studying with the body donors) that has enhanced our education beyond anything that books could teach us.”

Also participating in the ceremony was Provost Dr. Bryan Smith ’91, who remembered “exciting buzz” in the science building when the first donor body arrived on campus. To this day, Bryan said the body donors provide amazing research and preparatory tools for our students.”

Senior Madalyn Newby served as the emcee for the ceremony. Classmate Kaiden Hammer provided a historical perspective of study with body donors. Saefelislam Forgani spoke about his dream of returning to his native Libya as a physician and the advantage and confidence Heidelberg’s anatomical curriculum has given him. Students Brianna Lloyd and Kayla McCoy, who are planning medical careers in pediatrics and oncology respectively, also participated in organizing and executing the ceremony.

“Thanks to the generosity of our body donors, I am one step closer to my dream,” Saef said.

In his prayer, Chaplain Paul Sittason Stark said “the names and lives unknown to us” have provided a vehicle for scientific research.”

“We remember and honor their lives. Even in death, they have given a great gift to us,” he said.