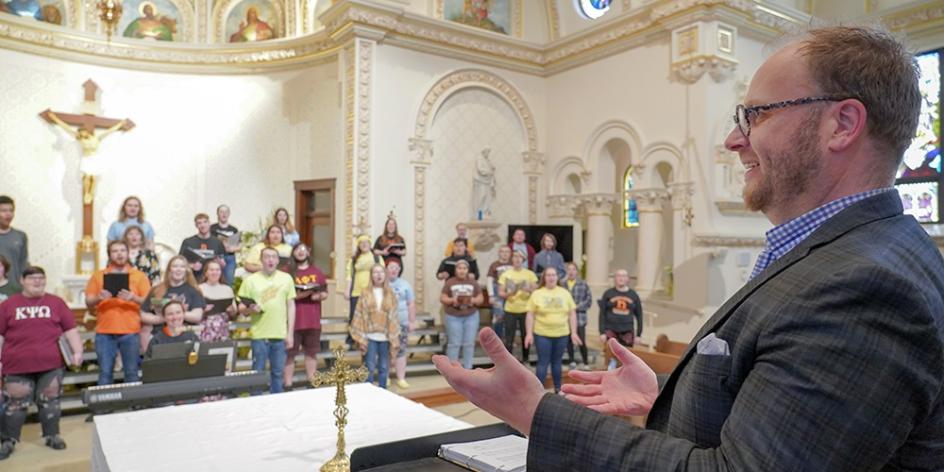 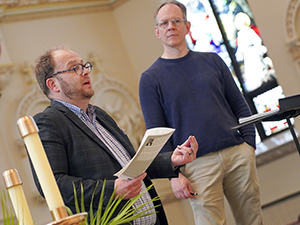 When the Heidelberg Concert Choir takes the stage for its home concert on Friday, April 29, the repertoire will include a world premiere of a newly created piece of music, When Music Sounds, commissioned specifically for the choir and composed by Dr. Eric William Barnum.

Commissioning new works for the Concert Choir is a tradition that dates back to the late iconic director, Dr. Ferris Ohl. Current Choir Director Dr. Greg Ramsdell reached out to Dr. Barnum to create this new work because the choir has enjoyed performing a variety of his compositions during the 11 years that Greg conducted the ensemble.

Greg first discovered Eric’s music while programming repertoire for the 2013-2014 British Invasion program. That year, the choir performed The Sweetheart of the Sun, a setting of English poet Thomas Hood’s Ruth. The piece was so well received by the choir that Greg included Eric’s Adoramus Te, Christe on the 2014-2015 program and his The Lady in the Water, another setting of a Thomas Hood work, on the 2015-2016 program. The choir has since reprised The Sweetheart of the Sun on the 2018-2019 European tour program and The Lady in the Water on the 2020-2021 program. During fall of 2019, Greg programmed Eric’s Afternoon on a Hill, a setting of a poem by Edna St. Vincent Millay, on the Homeward (Un)Bound program.

Eric’s compositions are attractive for a number of reasons. “Eric’s musical settings are the ideal marriage of text and music,” Greg said. “Once you have become familiar with one of his scores, it is difficult to ever hear that text in a different musical setting. Dr. Barnum’s pieces are incredibly evocative and communicative, and they always demonstrate seriousness of purpose and impeccable craftsmanship. Even if there are moments that seem unusual at first sight, by the time one gets to the performance, those same moments feel inevitable. His harmonies are complex and demand the most careful attention to issues of blend, balance and intonation.”

As a way to engage ’Berg music students in the creative and collaborative process, the School of Music & Theatre brought Eric to campus on Thursday, April 21, to work directly with the choir on the new piece and to conduct a choral clinic for the students in preparation for the upcoming concert.

Senior Aurora Kinney reflected on the morning coaching of When Music Sounds. “The energy and passion he had for music was positively received and really helped us connect with such a thoughtful piece,” she said.

Eric’s current piece is commissioned in honor of the 2019-2020, 2020-2021 and 2021-2022 members of the Concert Choir, all of whom persevered in their commitment to excellence in choral singing despite the challenges and obstacles presented by the COVID-19 pandemic. The text of When Music Sounds features the poetry of Walter de la Mere and speaks of the power of music to transport the human mind beyond everyday realities.

About the guest composer

Eric William Barnum continually seeks new ground in the choral field. Working with choirs of all kinds, his collaborative leitmotif endeavors to provide intensely meaningful experiences for singers and audiences.

He is currently the director of Choral Activities at Drake University in Des Moines, Iowa. He has appeared as a conductor across the U.S. and on the international stage and has worked with some of the most innovative minds in the choral field.

Eric’s compositional voice and vision continue to gain popularity around the globe with performances by choirs internationally. He composes for choral ensembles of all types, from professional to youth choirs, and has received numerous awards and grants, and has held residencies across the country and throughout the world.

According to Greg, after the stifling of the arts due to the pandemic, there is a sense of increasing hope and optimism. “Artists are ready to engage in a full return to perfecting our craft,” he said.

In that light, the theme of the concert is My Singing Soul Cries Out. The repertoire is a celebration of the return to the performing arts in general and for music and singing in particular.

Senior Anna Zeller vividly described her experience in the choir during the pandemic. “The Heidelberg University Concert Choir has been through so much in the past few years. We have gone through periods where we rehearsed through a screen via Zoom, sang through masks or sometimes could not sing at all,” she recalled. “In all aspects, we were barred from truly singing freely. During these times, we could not truly form the full connection that takes place when voices join together to create something beautiful.

“This song is dedicated to those of us who in spite of all these daunting barriers, persevered in singing and still made it into something special. Now that we no longer have to wear masks, it also speaks of a new period of time in which we are rediscovering the beauty and connection that is created in singing and creating musical stories.”

The Concert Choir, along with the Chamber Singers, will perform their concert at 7 p.m. Friday, April 29, at St. Mary Catholic Church, 85 South Sandusky Street, in Tiffin.

The public is invited to attend the concert featuring the world premiere of When Music Sounds along with a program of other choral music set to a variety of texts and including accompanying instruments, soloists and small groups. There is no charge, but a freewill offering will be taken. The choir is eager to share its musical selections, both old and new, with all those whose singing souls cry out.