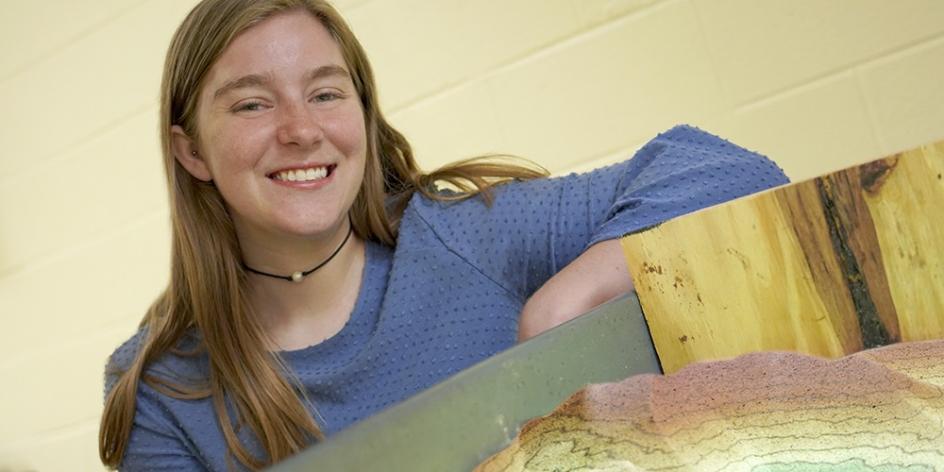 Who doesn’t love playing in the sandbox! Senior Kelly Spence, an environmental science and economics double major with a computer science minor, has created an augmented reality sandbox for her Senior Honors project that has applications for future Heidelberg students.

Kelly’s version, modeled after a prototype by Oliver Kreylos and a team of researchers at the University of California-Davis, may not be very pretty aesthetically – until you actually turn the lights off and get your hands in the sand. And then, it’s very cool!

The UC-Davis researchers created a real-time augmented reality system that physically creates topography models projected onto the sand in real time, even as the sand is moved and changed. Utilizing a projector, an Xbox Kinect and a computer running a Linux operating system, Kelly created a version of the augmented reality sandbox that can be implemented in ‘Berg classes such as geology and watershed hydrology.

“Having this hands-on learning tool will benefit the students and Heidelberg community by giving them a resource that is not yet widespread in most academic communities,” Kelly explains.

After demonstrating her augmented reality sandbox during a presentation at the Minds@Work Student Research conference earlier this month, this week (Thursday) for her Senior Honors capstone presentation, she’ll talk about the history of the tool, her own project and various applications.

While a sandbox seems like something quite simplistic, when you apply scientific principles and techniques, there’s a lot more research – and patience – involved than you might expect. And, it all started with an idea Kelly had in high school, when she attended a National Scout Jamboree in West Virginia. There, she saw an augmented reality sandbox for the first time and knew one day, she wanted to make one of her own.

Her interest was reinforced when she was searching for a college and learned about Heidelberg’s National Center for Water Quality Research. She interned at the lab last summer and continued to work some hours during this school year.

To develop her model, Kelly did a lot of background reading and in-depth study of the UC-David model online. A Hammel grant allowed for the purchase of a computer, and then she got busy coordinating the various elements of her project. There was a lot of trial-and-error, but that’s what good research is all about.

“I just took it a little bit at a time,” she says. “It was really exciting when I ran the final piece of code to turn it on.”

Kelly is the first to note that assembling her augmented reality sandbox really was a team effort that drew upon the talents of several ‘Berg employees, such as Will Marshall, IT systems administrator, and electrician Jeff Brickner.

Great outcome and a job!

Kelly, captain of Heidelberg’s women’s lacrosse team, has been interviewing for jobs in recent weeks. During one interview with a consulting firm in Columbus, the topic of her research and augmented reality sandbox project came up.

The company was so impressed that they hired Kelly as A GIS (geographic information system) analyst. She starts her new job in Columbus one week after graduation!