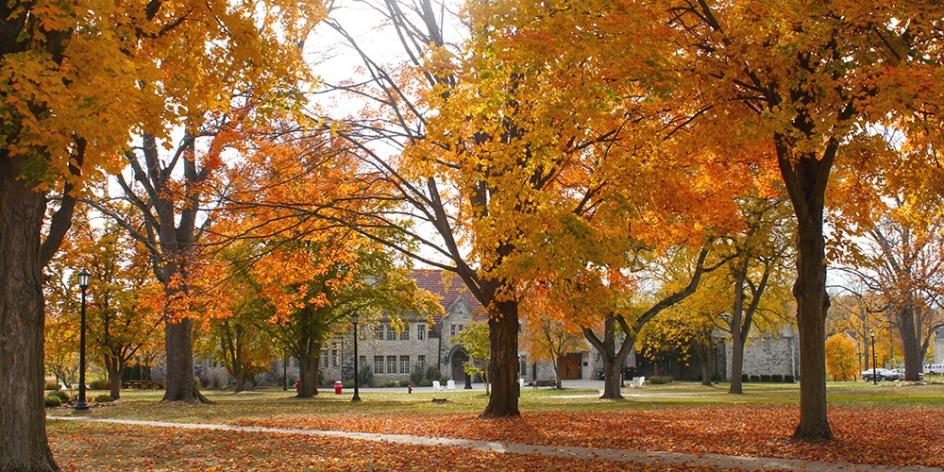 This time of year, perhaps more than any other, Heidelberg’s trees take center stage with their vibrant hues of red, orange and yellow. They paint a stunning canvas that creates a welcoming and memorable impression for first-time visitors and a hint of nostalgia for alumni who have come and gone, and come home again.

It is appropriate, then, that Heidelberg’s Board of Trustees, during its fall meeting late last month, voted to name the collection of trees across all parts of the campus in honor of the man who made it his mission to champion the biotic diversity of Heidelberg’s property. Dr. Percy Lilly single-handedly selected and oversaw the planting of more than 60 diverse species of trees during his tenure as a member of the science faculty.

The Percy Lilly Campus Forest is now official. The designation recognizes the efforts of Percy, now 95 years old, for his commitment to beautifying the campus and for introducing generations of students to the wonders of the natural world. Dr. Lilly retired in 1998 after serving as a professor of botany and microbiology for 32 years.

Heidelberg’s Campus Forest is one of the most species-diverse collections of trees found in northwest Ohio.

“We often ask ourselves the important question, ‘What are some of the things that distinguish Heidelberg from the many other fine liberal arts colleges and universities in Ohio and in neighboring states?’” wrote former colleagues and retired biology professors Dr. Ken Baker and Dr. Susan Carty in proposing the naming of “the diverse assemblage of trees across all parts of campus” in honor of their friend and former colleague.

“We sometimes overlook the physical beauty of our campus. Our locally quarried granite-faced buildings are set against the splendid diversity of elegant trees that have been planted across campus. … The trees are an unusual and distinctive feature of our campus.”

After the Board approved the naming of the Percy Lilly Campus Forest, it was Ken and Susan who delivered the news to him. When they first broached the idea with Percy before submitting the proposal, “he was shocked at first,” Ken says. “But then, he realized it would be a significant honor.” There was a happiness and a serenity in his expression that won’t be forgotten, Susan says.

From 1956 until his retirement, Percy taught a wide diversity of courses including Introductory Biology, Botany, Field Botany, Plant Morphology, Plant Physiology, Microbiology and Genetics. Throughout his time, he worked with his students and alumni in planting trees across campus. He remembers that the administration, under President Terry Wickham, was supportive of his efforts, one of which was the initiation of the planting of a tree on Alumni Weekend, a tradition that continues to this day.

Percy’s love of and interest in flora, however, predates his time at Heidelberg. It was during his undergraduate years at Concord College (now University) in Athens, West Virginia, where he was inspired to explore a career in botany. While at West Virginia University for graduate study, he honed his taxonomic skills by identifying over 400 species of plants for his thesis.

“He grew up in the forests and hills of West Virginia,” Susan recalls. “Trees are just part of his genetic makeup.”

Percy’s generations of students were the beneficiaries of his care for and expertise in Heidelberg’s forest.

“Both Susan and I for years, with our field biology classes, made extensive use of the trees,” Ken says. Susan adds, “Nearly every student who came through Heidelberg experienced tree keying” as part of their Biology 110 Contemporary Biological Problems class. She also notes that over time, a number of students took on research projects or enrolled in special topics courses related to the forest. “One of the last ones was to update Percy’s map and bring it into the digital world.”

Behind Ken and Susan’s proposal was their desire to ensure that the diversity of campus trees is sustained and to remind people that the gift of Heidelberg’s urban forest – shepherded in large part by Percy Lilly – is worth cherishing.