Ethics Case Competition: And the winner is … Heidelberg! 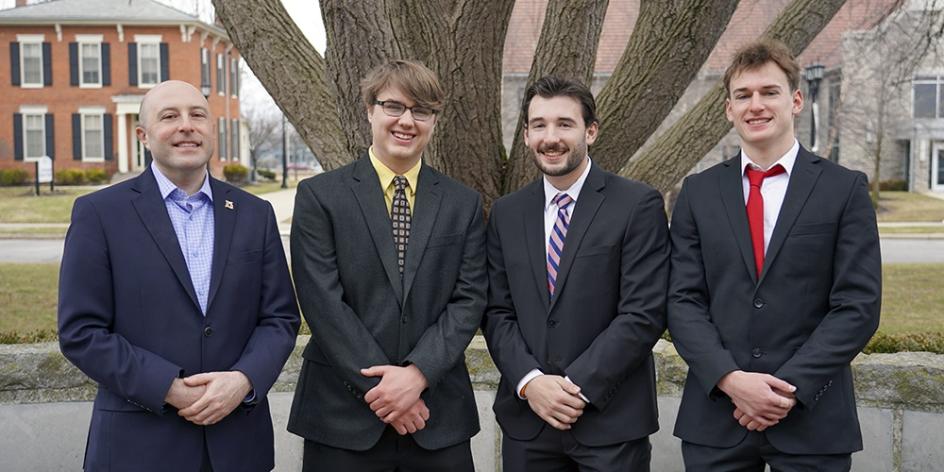 Five years in and the Intercollegiate Ethics Case Competition has a new champion: a team of bright, talented, hard-working senior Accounting majors from Heidelberg University!

Last weekend, David Haines, Ryan Waskiewicz and Spencer Tredwell, and their accounting professor, Scott Miller, learned that their ’Berg team came out on top of the challenging competition. The team put in the work, and their efforts were rewarded.

Needless to say, they were thrilled with the news. And beaming with pride – for themselves and for Heidelberg.

“For Heidelberg to win this event and join the list of winners that includes schools like Baldwin Wallace, Case Western Reserve and Kent State, it’s a proud moment for everyone,” Scott says.

In Heidelberg’s first year of competition, the expectations were high, yet realistic. Scott recognized his team members’ potential: to challenge themselves, to represent themselves and Heidelberg in the best way possible, and to produce a solid presentation.

“Overall, this was a student-driven project and my role was to inspire them to believe that they could win,” Scott says, adding that he set deadlines for the team and served as a sounding board for their ideas, but the work was all them.

When the results were announced on Saturday, Feb. 26, they realized they had accomplished their mission. “I was thrilled for what it meant for the students’ confidence and for Heidelberg’s reputation,” Scott says.

Ryan, a student-athlete on Heidelberg’s baseball team, was mid-game in Indiana on a chilly February day when the results were announced. “The news of our victory certainly helped warm me up from the 35-degree weather I had spent the last couple of hours in,” he says. “I couldn’t help but feel extremely proud of the team. I knew we had all put in a serious amount of time and effort and was happy to see that effort manifested into a win.”

David says the team’s win validated the time they spent researching, discussing and building a truly great presentation. “I felt very honored” with news of the team’s win, he says. “I was confident in our presentation and our paper, but I also knew we were going up against some very smart students from other schools.”

Spencer adds, “Being a student-athlete at Heidelberg, it was great to know that we were able to bring credibility to Heidelberg off the field in a competition that features some of the top institutions in the state. … I knew that with Professor Miller mentoring our team as well as having two other smart guys in Ryan and David, we would be able to represent Heidelberg in a positive manner.”

And they totally did.

The competition featured undergraduate and graduate-level accounting, finance and information systems majors from universities across Ohio, competing to present solutions for a case study involving ethics in accounting. Scott explains that the students were provided with case materials on Jan. 1, which they were to review and discuss only with their teammates and advisor. This year’s case gave students an in-depth look into the emerging issues surrounding Environmental, Social and Governance (ESG) accounting and reporting.

The team – who volunteered to participate in the competition – met weekly to discuss the case and in the off time, they conducted extensive research on the topic. Their task was to prepare a five-page written response to the critical issues identified in the case and then record a 15-minute presentation that highlighted their recommendations. Their paper and presentation were judged by Cleveland State professors and Cleveland-area audit practitioners.

At the beginning of their preparation, the team had no idea what the assigned topic would be. “So we were more or less going in blind,” Ryan says. But they didn’t stay that way for long. The team divided up assignments around the ESG topic and dove into the research – and the in-depth learning that came with it. It was a great opportunity to apply what they had learned in class to an important accounting concept and to hone their critical-thinking and problem-solving skills.

They quickly learned that ESG is already being reported on by most companies in some capacity, and is starting to become a main factor in how some investors make their decisions, Spencer explains.

For David, the realization that ESG “does not have the level of comparability (a major accounting principle) anywhere near what you would find with balance sheets and income statements” was somewhat surprising. “I had to learn how to build different ESG reporting formats and see how different formats showcase information,” he says.

ESG reports was vaguely familiar to Ryan, but he quickly learned about the push that was being made to regulate them. “It was interesting to read about the frameworks that are trying to be established to help make the reports easier to read and understand,” he says. “I really enjoyed diving into how intangible assets impact firm value and effects that has on markets today.”

Scott believes the win in the Ethics Case Competition will help put Heidelberg business students on the map among peer institutions. That was a goal throughout the team’s preparations, and they delivered when it counted.

And David, Ryan and Spencer may not realize it yet, but they may have just started a legacy in the School of Business. “Now, our younger business students will be tasked with carrying on a winning tradition,” Scott says. “I know they are capable of doing so, and we’ve already started talking about that in class this week.”

Next up for the team

Scott believes David, Ryan and Spencer “stack up with the best that any school has to offer.” He may be onto something. Although the competition was a one-time deal, the experience will help launch the trio into the next exciting steps toward their careers in accounting.

After graduation, David will be off to law school. He has already been accepted into five programs and will make his decision in early April.

Ryan has lined up an internship with Ernst and Young in Baltimore for this summer. In the fall, he plans to return to Heidelberg for his MBA, which, when completed, will qualify him to sit for the CPA exam.

Spencer also will be interning with Ernst and Young this summer. In August, he’ll begin coursework toward his master’s degree in accounting at The Ohio State University.