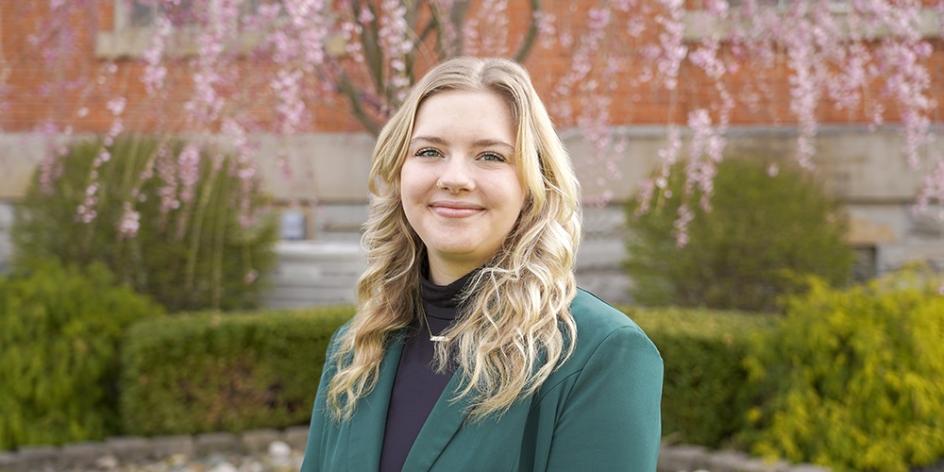 Any Grey’s Anatomy fans out there? You never know when a character from a popular TV show such as Grey’s might inspire a jump-off to an academic endeavor. That’s what happened this year for second-year student Kelsey Stanfield, an English and Communication double major.

Kelsey recently participated as a presenter at the national Popular Culture Association conference, held virtually this year, at the recommendation of her professor, Dr. Julie O’Reilly. Julie was so impressed by Kelsey’s research into the Grey’s character Callie Torres – conducted for her Media Criticism class last semester – that she suggested that her student join her as a presenter at the conference.

The topic of Kelsey’s presentation, which she also shared at the Student Research Conference earlier this month, was Callie Torres: Bi-con or Bygone?

“Callie Torres’ character on Grey’s Anatomy has always stuck out to me,” Kelsey explains. “Her use of metaphor to describe her sexuality and story arc of defining herself was unlike anything I had seen prior. After discussing representational analysis in class, I knew I had to explore Callie’s character more in-depth because if she was the first representation I had seen, then surely she had impacted others and that made her representation of queerness worth exploring.”

Presenting her research at the Student Research Conference helped ease Kelsey’s nerves and give her a sense of what to expect at the conference. She was able to assess and manage the necessary technology and prep for an intense Q&A session – until she realized that one of the presenters in the virtual room with her was a graduate student and the other had finished graduate school and was now working with students of her own!

Kelsey says it was “both exhilarating and nerve-wracking” to have the opportunity to present alongside such accomplished scholars. And to top things off, she had to present first.

But Kelsey more than held her own! Just ask her professor.

Julie explains that Kelsey’s conference panel was in the LGBTQ+ Studies Area, and although the Pop Culture Association has an area for undergraduate students only, some “regular” areas do accept submissions from undergrads too. Kelsey was in one of those areas, so she presented alongside a graduate student and a scholar from another university.

“She got great shout-outs from her two co-presenters in the comments and she handled the Q&A extremely well,” Julie says. “I was super impressed and am a very proud professor!”

After her presentation, she was able to relax and enjoy the other presentations – minus the nerves. In fact, that was her favorite part of the conference experience. And it taught her a lot.

“After we each finished our presentations, the others would send thoughtful and kind messages, complimenting the presenter,” Kelsey says. “Each of us celebrated one another and their hard-earned accomplishments.

“It was an entirely positive and uplifting experience and I am so grateful to Dr. O’Reilly and the Pepsi Grant for giving me this opportunity.”

She also learned something else very valuable: Hard work and excellent research will stand for on their own every time. She was confident that the time, effort and energy she put into preparing for the conference made her a worthy presenter. And the support and mentorship from faculty didn’t hurt!

“Presenting is certainly worthwhile and research should be showcased,” she says. Conferences – whether on campus or on a national stage – are a great way to celebrate the hard work of peers, and Kelsey is planning to support both going forward.

Julie also was a presenter at the Pop Culture Association conference. The title of her presentation was Self-Maid: Socially Situated Knowledge in Netflix’s 'Maid'. It was an analysis of that series using feminist standpoint theory, looking specifically at how that series provides a more intimate, immersive view of domestic work than we have seen before on television (not that it is without some issues).

Julie presented in the Gender Studies area – the area for which she serves as chair for PCA. As an Area Chair, she manages submissions and creates panels for that area. She has been attending and presenting at PCA annually since 2004, minus 2020, when the conference was canceled.