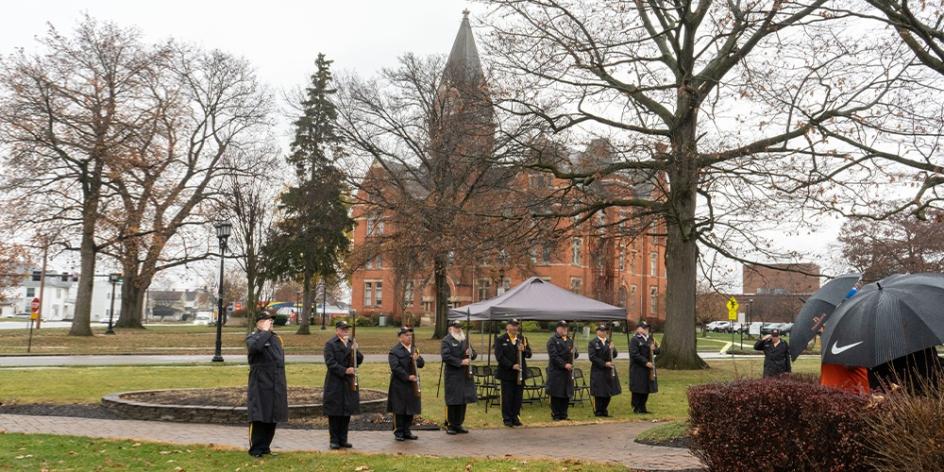 With deep respect and gratitude, the Heidelberg community honored veterans past and present during a rainy yet meaningful ceremony Friday morning in front of Beeghly Library.

At the 11th hour of the 11th day of the 11th month – which signifies the end of the war to end all wars – Heidelberg’s ceremony began. Student Senate planned the annual gathering, with senior Senator Lillian Whitcomb taking the lead. Members of the local United Veterans Council conducted the raising of the flag while senior Jayce Porter simultaneously sang “The National Anthem,” followed by sophomore Zaria Keys singing “Lift Every Voice.”

Noting that through history, there have been 41 million Americans who have served, President Rob Huntington said the ceremony was “a moment of gratitude and reflection for the service and sacrifice all veterans have made.”

“We have deep respect for their service and their willingness to stand up in the face of the ultimate sacrifice,” he said.

The keynote speaker was Richard “Dick” Nolte, who was called to duty in 1968 while he was a college student at the University of Toledo. Dick served as a platoon leader in Vietnam as a member of the 101st Airborne Division and was honorably discharged with the rank of captain.

Dressed in his jungle shirt, Dick gave reflections on some of the major conflicts of the Vietnam War. For his service he was decorated with the Combat Infantryman’s Badge, an Air Medal, a Bronze Star and an Army Commendation Medal.

Today, Dick is active with the Vietnam Veterans of America, serving as a state officer covering northwest Ohio. He spoke about the VVA’s mission to assist veterans in acquiring health care and compensation benefits to which they are entitled. The VVA also has launched a PTSD awareness campaign and supports research into service-related illnesses.

The ceremony concluded with a prayer for peace in the world by Chaplain Paul Sittason Stark. Paul asked for guidance for living with compassion instead of conflict and peace instead of war. The United Veterans Council also conducted a 3-volley salute.