HYPE’s Erin Gruwell to students: Write your own ending 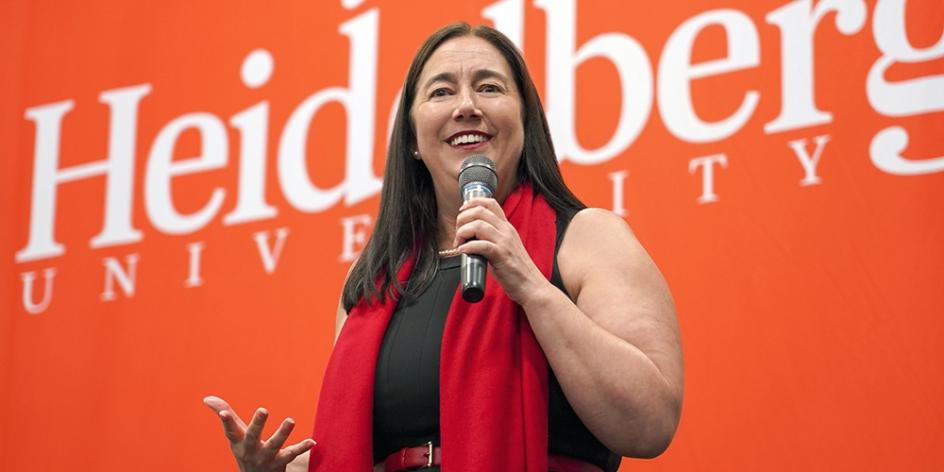 Twenty-eight years ago, Erin Gruwell entered classroom 203. There, she would transform a class of apprehensive, survival-mode students into accidental activists through tolerance, honesty and writing.

When she intercepted a racist drawing being passed around in a classroom of enemies, Erin drew the comparison to the propaganda of Nazi Germany. Those students who were always kicked out of classrooms had no idea what a “holocaust” was. The realization of how much these students had missed pushed “Ms. G” to become “Mama G.” She began working two extra jobs to be able to bring the humanities to life, providing guest speakers, field trips and most importantly, the journals that would become the key to her students’ growth. Erin Gruwell’s story of compassion breaking the school-to-prison pipeline became an award-winning movie in 2007.

On Thursday, Erin shared her story with a packed Seiberling Gymnasium audience of Heidelberg students as the first HYPE Career Ready® keynote speaker of this academic year.

Gang violence in Long Beach, California, is a key factor in all of the young lives that Erin touched and shared with ’Berg students. The prevalence of violence, poverty and racism in their community led to teachers who were only motivated to get through the day. Erin was able to form close bonds with all of her students and through that connection, helped these students attain safer and more fulfilling lives.

Erin’s story began with two classroom enemies: Carlos and Sharaud. The two were divided by race, but shared similar stories. Carlos was often kicked out of class. In Erin’s class, however, he engaged enough to ask some important questions. The first, sparking his connection with Erin, was “Do you think I was an ugly baby?” When Erin dismissed the question, Carlos followed up, explaining how his mother abandoned him at 6 months old. This sudden glimpse into his life changed everything.

Sharaud’s story was similar. In the teachers’ lounge, Erin was warned about Sharaud, who brought a gun to school the year prior. Sharaud was the son of an addict, who abandoned him before birth. Sharaud’s father finally agreed to meet him, but it became obvious that his father only wanted to satisfy his addiction, asking Sharaud for some of the 7-year-old’s allowance money.

When a racist caricature of Sharaud was passed around the class, and reached Sharaud’s desk, Erin said she saw his tough-guy facade crack. “He looked like he wanted to cry. Like he wanted to disappear,” she said.

Rather than sending the students out of class, like her fellow teachers urged her to do, Erin “became Medusa. I wanted to make them hear me – I wanted to shame them.” So she compared the caricature to the propaganda of the holocaust.

That’s when Carlos raised his hand for the second time. “What is that? What’s a holocaust?” That question alone destroyed her perfectly planned syllabus. The students had no idea the kind of damage that a label could do: they couldn’t see how carelessly they assigned and assumed the bad labels available to them. “I wanted to give these students a new label – beautiful, brilliant,” Erin said. So, she provided them with journals and the opportunity to use their own writing abilities to help them find new, better labels. With this new understanding of her students, she shifted her focus to tolerance through genocide awareness and self expression. This new mission began with the line game.

Erin’s line game was simple. She cleared the room of desks, with students facing each other on opposite sides of the room. She placed a single line of tape in the center, and began her instructions. “Go to the line if you …” She began the game with pop culture references but slowly, the questions became more serious. Erin gave them the out of the word someone. “Go to the line if you know someone who is poor.” It didn’t have to be that student, personally, but everyone knew someone who was poor.
She made the mistake of using the word you, twice. “Stand on the line if you have ever been homeless.” At first, a girl in class named Marie moved to the line. She stood alone, staring at the ground, until both Carlos and Sharaud joined her on the line.

The second mistake of you was about abuse. Calvin, a boy in her class, went to the line. As a young boy, he skillfully hid his parents’ abuse. However, his little sister didn’t - and since that day, Calvin had been in 42 foster homes.

Today, all of those students have since grown up, and are doing well for themselves. Calvin works as a nurse at an E.R. Sharaud is an actor. Carlos and Maria are both public speakers, traveling the country and encouraging today’s youth.

Gang violence and the film

Armand Jones was not a student of Erin’s, but played the character of Grant Rice in the Freedom Writers movie, made to chronicle her story. Armand was a student impacted by the murder of his grandfather when he was in elementary school, and the death of his father when he was in high school. He was the man of the house, constantly looking out for his grandmother, mother and little sister, and trying to protect them however he could. The money he earned from his role in the movie went to providing for his family. After the end of filming for Freedom Writers, his family urged him to spend some money on himself and his friends to celebrate. He treated himself to new shoes and a necklace, and took his friends out for dinner at Denny’s. There, he was robbed by a gang in the Denny’s bathroom, an encounter that ended with his being shot and killed.

Erin Gruwell stayed close with the family throughout the fallout, joining them in the courtroom as Armand’s murderers were convicted. Her work against gang violence and the school-to-prison pipeline continues today. Like the empathy she has for all of her students, her empathy for Armand was highly evident and ever impactful.

Today, “Mama G” is a teacher and the head of the Freedom Writers Foundation. Her dedication to students is still evident. “I’m just an ordinary person with extraordinary students,” she explained, undeniably proud.

On Wednesday night, HYPE hosted a viewing of the 2007 film Freedom Writers, which Erin attended. There, she met Heidelberg student Tramon Wiley, with whom she built a quick and powerful connection. Tramon told Erin that he too had a story worth sharing, and wanted to be a motivational speaker. Erin encouraged him and continued to talk with him that night and the next day, referencing him often throughout her speech.

Tramon was just as touched by her story. He called his mom to talk with her after watching the movie. “She was amazing,” Tramon emphasized, “and when she gave me her book, she wrote in it, For your story, Write what needs to be written. It will forever stick with me!”  At the end of her speech, Tramon went on stage to tightly hug her and thank her for her time and encouragement. The emotional moment caused several tears, and much interest in Tramon’s future as an inspirational speaker, himself.

Erin left the ’Berg students with some encouragement for the rest of HYPE Day. “My favorite four letter word is hope, but I think today, it has to be hype,” she explained. She urged students to enjoy the day to the fullest and to be present. “Lean in, be present, ask questions and shed a tear if you have to,” she encouraged. “For you today, it’s about writing that different next chapter.”