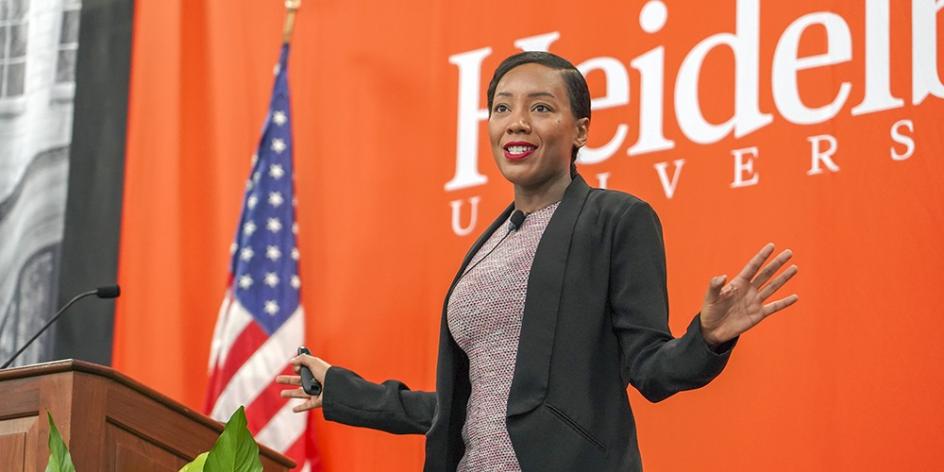 Dr. Moogega “Moo” Cooper is a true role model for women in science and technology. But she is so much more. With her position as the planetary protection lead of NASA’s Mars rover mission, she is a real-life “guardian of the galaxy.” Her work as a planetary protection engineer at the Jet Propulsion Lab is integral to the ongoing success of the current rover Perseverance. It’s ultimate mission is to determine whether the red planet could be habitable for humans.

Moogega visited Heidelberg on Tuesday to talk about “the cool things happening on Mars today” as the keynote speaker for the November HYPE Career Ready® program.

Specifically, Moogega has spent the past 8 years developing systems on the Perseverance, whose task is to search for ancient life on Mars, cache rock and soil samples, and make sure that we don’t harm what’s already there.

Essentially, her work is to ensure that tubes used to collect samples are clean and free from any contaminants. Of the 43 collection tubes that went with the Perseverance to Mars, about 20 will return. Today, she said about 13-14 samples have been collected. The cleaning was painstaking work that had to be checked and double-checked.

“At the end of the day, if we find any contamination in the tubes, there goes 2 years (of work),” she explained.

It’s appropriate that her current work is with Perseverance because that was the theme of her HYPE presentation.

“Eight years seems like a long time and it is,” she said, “but there have been many small milestones in between.”

Moogega has been preparing for her important work since she was a teenager, graduating high school at age 16 and earning her Ph.D. in mechanical engineering at 24. She’s passionate about empowering individuals and organizations to achieve their dreams. Her work on Perseverance has taught us that our dreams don’t come without setbacks. But the key is to keep believing.

“We have to be willing to do the hard things to overcome obstacles and setbacks,” she said. “We all face challenges and hardships, but the key is how many times you get back up.”

Doubling down on dreams

Whether it was a rejection for early college entrance or figuring out how to continue to work productively through the pandemic, Moogega has always found ways to persevere. Many times, it’s been one step forward, two steps back. Her work, she said, has been fun, fulfilling but really tough at times. “But we just kept going.”

Moogega said she lacked an understanding at a young age as to why she should care about math and science. But a film by astronomer Carl Sagan changed her life. At that point, she determined that she “wanted to contribute to our knowledge of where humans are in the universe.”

At age 15, she attempted to graduate high school early but was told her test scores and courses weren’t up to par. She turned that failure around and created a roadmap to her goal. She doubled down, took extra courses and summer school and ultimately, graduated at 16. While working at NASA’s Langley Research Center, she connected with a former Apollo astronaut, then a professor, and began working in his lab. From there, her love of physics – and her career – just soared.

In the perfect place

Moogega told Heidelberg students that they are “in the perfect place” if they have an interest in space engineering. Eighty percent of the work on the rover missions is just waiting to be developed.

She offered the students some advice for following their dreams, centered around the idea of being limitless in how they perceive and think about things:

Great advice for future space scientists and those interested in STEAM careers.