Opening Convocation: An ex-lone wolf & the family by the creek 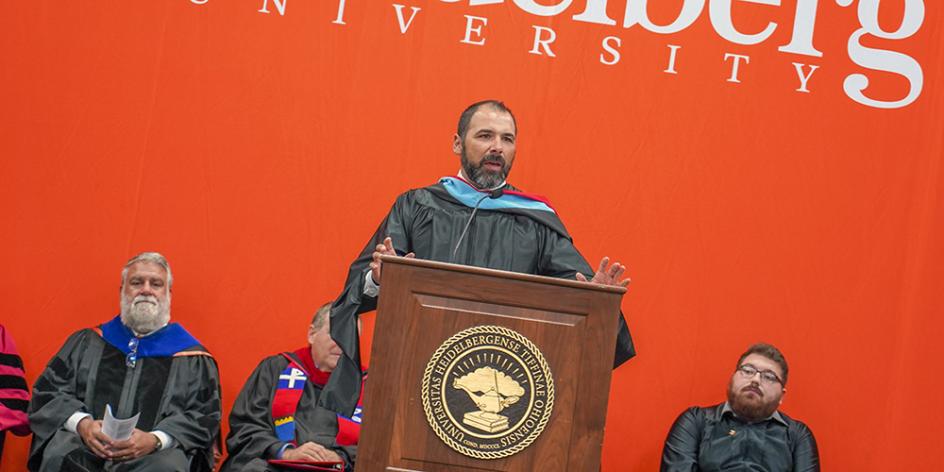 Heidelberg traditions: The creek has a say

Thursday morning treated us all to a bright, sunny sky and a comfortable 70 degrees. The perfect weather for T Bridge. As the bugs buzzed along the river, freshmen rushed from class and practice to the shade of a large tree, across the street from the recently repaired Krieg Hall stairs. From across the way, I could hear the chatter and laughing as they anticipated the Sweet Alma Home tradition in which they would soon take part. 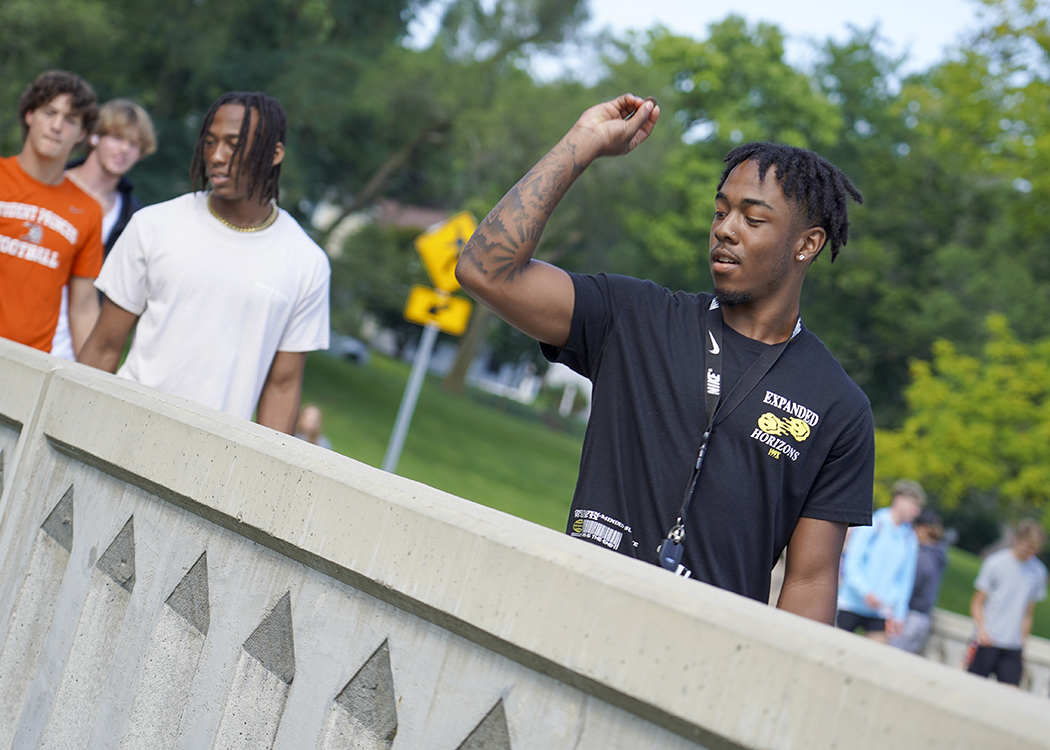 Upperclassmen met and divided the duties: two to hand out pennies, two to hand out beanies and four to hand out information cards about the T Bridge tradition, and answer any questions freshmen had as they proceeded.

When the stragglers slowed to a trickle, and the clock approached 10:55 a.m., Dean of Student Affairs Chris Abrams, Dean of Students explained what was about to happen. “When we cross the bridge, you will make a decision,” Chris began. While upperclassmen grabbed their penny bowls and urged the last classes to run to the back of the lines, Chris explained the age-old Heidelberg tradition. To toss or to keep their gifted pennies: to pursue love or fortune as they began their adult lives.

Which would this batch of freshmen wish upon themselves? Would they be lucky enough (as so many are) to find both while they chase their passions? Some may claim that only time will tell – but I, for one, think the creek has a say, too.

As they continued down Rebecca Street, the joy and confusion of having a beanie in their hand overwhelmed the air. “If you put it on your head, I’ll put it on mine,” some students dared each other, only half-sure of the fabric’s purpose. One tall student stopped by me.

“What’s the front?” another student asked, barely slowing down as he continued his walk to Sieberling. 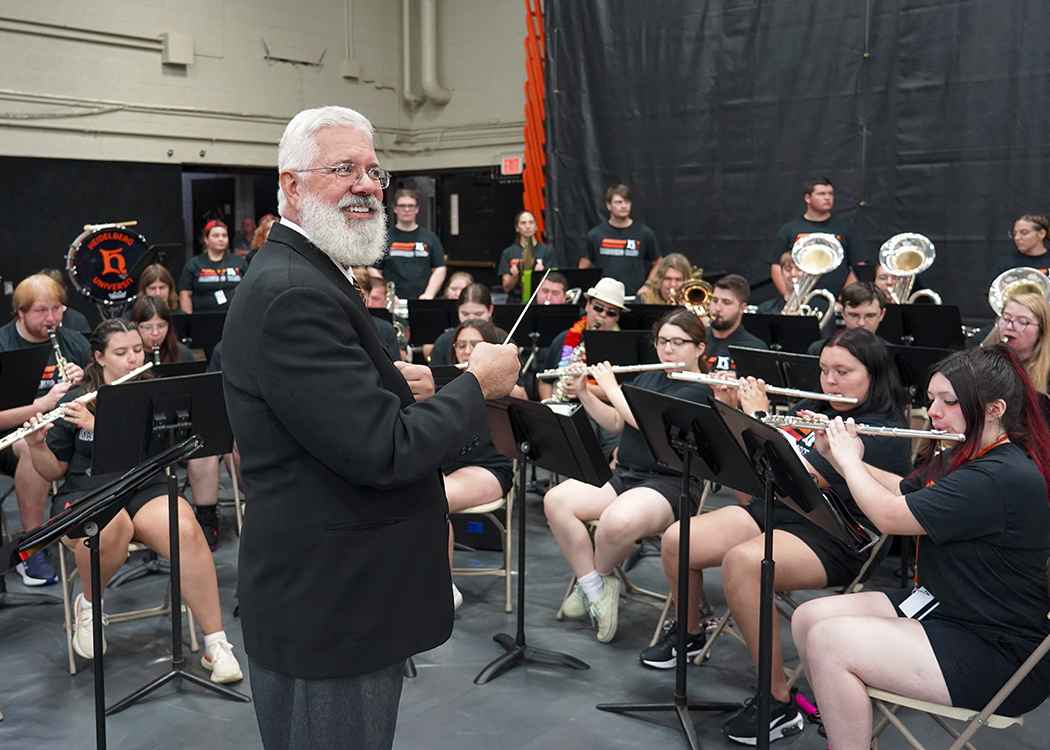 Upon entering Seiberling, the prideful brass of the Heidelberg band, led by Rod Miller, picked up, Pomp and Circumstance suiting the celebration. Upon the final note, Provost Bryan Smith made his way to the podium.

“Good morning, and welcome to the Class of 2026. Thank you for choosing to join the Heidelberg community,” Bryan began. Bryan’s story began in the same chairs where the freshmen were seated. A first-generation student, an athlete, excited and anxious to begin a college career, and whatever other career was to follow. Bryan shared the self doubt he felt once upon a time. “I was able to do it,” Bryan certified, “and I’m confident you can do it as well.” 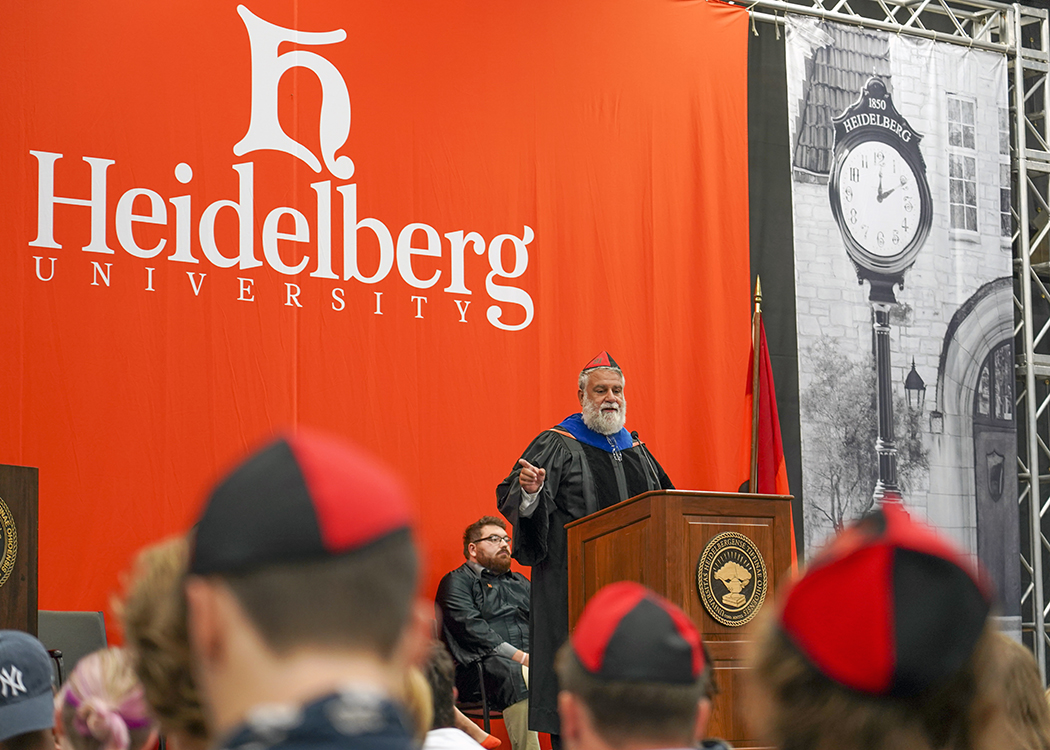 Senior Jayce Porter, Concert Choir president, drum major and vice president of the Euglossian Society, sang “The Star Spangled Banner.” Their performance was followed by the hoots of their supportive friends in the School of Music & Theater. Immediately following, Zaria Keys, a sophomore theater-psychology double-major, sang "Lift Every Voice and Sing." Zaria is a member of Black Student Union and performs in musical ensemble groups like Heimonics and Hei Notes, so she felt honored and excited to sing the Black National Anthem. Like Jayce, the cheers of her friends were littered throughout the general applause.

Following the singing, ’Berg Chaplain Paul Sittason-Stark shared his prayers and blessings for the incoming class as they begin the growth that the next four years will bring.

A tale of two presidents

Heidelberg University President Rob Huntington welcomed back students for Heidelberg’s 173rd year of educating young women and men. He offered some statistics about the, “smart, talented and interesting,” incoming group of 255 students.

President Huntington’s recommended books this year are “The Gentleman in Moscow” and “The Lincoln Highway” by Amor Towles, for their interesting plotlines and colorful descriptions of important journeys. Following the theme of important journeys, he finished his speech with some classic advice: “Do not limit your big opportunities and life advantages at this university. It is our privilege to teach, mentor and serve each one of you, in support of you, as you pursue your academic and career aspirations.”

Student Senate President, Noah Kennard, a math education major from Shelby, Ohio, spoke next. He offered his congratulations and advice to the incoming class, encouraging them to make the most of their time at Heidelberg, to follow their passions fearlessly, and appreciate every moment.

A lone wolf no longer

This year’s Opening Convocation speaker was Chris Monsour. Chris majored in environmental biology with hopes to change the world – and he succeeded in significant ways through his care for others and dedication to conservation. Throughout his time on campus, he was an active brother in Sigma Tau Nu, a resident assistant, student senator, and student worker in the National Center for Water Quality Research. Chris graduated in 1999, and went on to earn his master’s in science education from Montana State University. For the past 23 years, Chris has taught biology at Tiffin Columbian High School.

Chris’s life at Heidelberg began with his single father dropping him off, and then driving back home. His quickness to leave Chris to his own devices was nothing new, and something Chris internalized and brought with him to the classroom on day one. His independent streak, however, would soon prove more harmful than helpful. 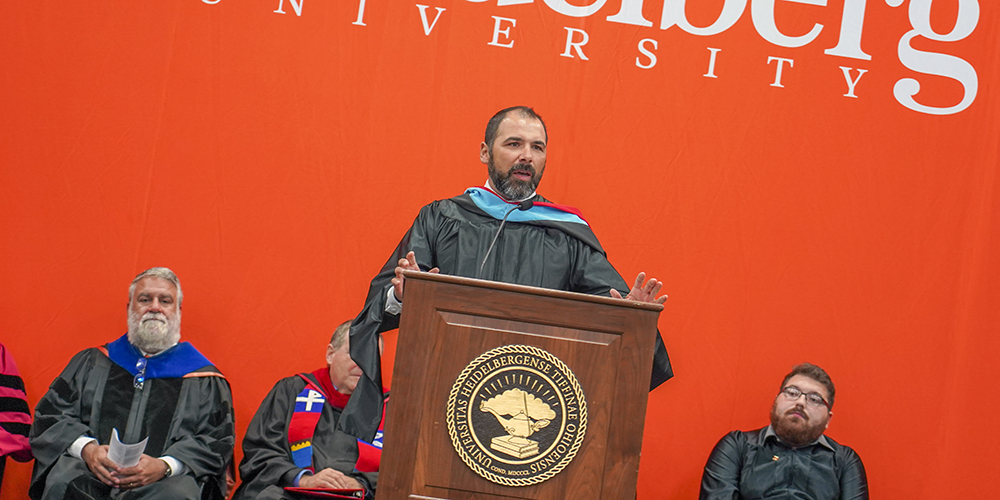 The three most important lessons Chris learned through Heidelberg were belonging, failure and redemption. Chris found his belonging and niche within Heidelberg. He quickly made friends in his biology classes, joined the Sigs and started building connections. “Feeling connected to others is intrinsic to human happiness and far outweigh extrinsic values such as beauty, money and status,” he explained, thinking back on the joy that his friends had brought, and continue to bring him. In order to find that same joy, he urged students to stay in the moment. “If you choose to live through your phone and rely on social media for affirmation, you will be missing out on what is going on around you.”

Chris said that although his failures were many, they were stepping stones toward his success. “For every accolade that they read for me, there were five more failures.” His first failure came during his first year of college. He felt unprepared and overwhelmed by the new challenges, and withdrew from his calculus class. But withdrawing from his calculus course wasn’t the first failure: it was refusing to ask for help or accept the care others offered him. “My friends offered to help, they offered to tutor me,  but I refused. I was used to not accepting help and was going to do this on my own. However the professor finally said, ‘No sense setting yourself up for failure,’ and helped me switch to another course.” He struggled through that first semester, but came out the other side understanding the importance that his choices had on his success. And he continued to choose success throughout the rest of his time at Heidelberg.

Chris’s redemption came after graduation. He didn’t feel comfortable living with his dad, who had gotten remarried while Chris was in school. On July 4, 1999, after an argument that nearly came to blows, he packed his things and came home to Tiffin. His fraternity brothers in the area helped house him until he got a job at T.J. Willies in town. He had the fortune of waiting on Dr. Denise Callahan, the superintendent of Tiffin City Schools at the time.

She asked me the question that would change my life and put me in front of you. She asked, “You are new here, aren’t you?”
I said, “Yes, I graduated in May with a biology degree, and here I am using that degree. Would you like fries with that?”
She said, ”You want to try teaching? We had a science teacher resign yesterday and we need a long term sub.”
“Sure, how hard could it be?”

Chris was young, and often mistaken for a fellow student. But quickly, he fell in love with teaching, and decided to turn it into his full time career.
So again, I reached out to Heidelberg to see what I could do to get my certification to teach and Heidelberg did not let me down. Dr. Miller in the Education Department created a plan for me. I spent two years substitute teaching and working on my coursework. Had I not said yes to Dr. Callahan’s offer to sub and had Heidelberg not allowed me to complete my course work, I would not be in front of you today. I would have not traveled the world doing conservation work. I would not have earned accolades I have been afforded. Heidelberg and the relationships I made during my four years is why I am the success I am today.

Chris’s story led him to talk to the new students, some of whom were his previous students in high school, and provide them with some overarching lessons. He offered six suggestions to those new students as they began their journey, urging them to begin with empathy, inquiry, and self-certainty.

To watch all of Chris’ speech, check out our YouTube video of the event.

Next, Ashley Helmstetter addressed the incoming class about the Heidelberg traditions they had already taken part in. 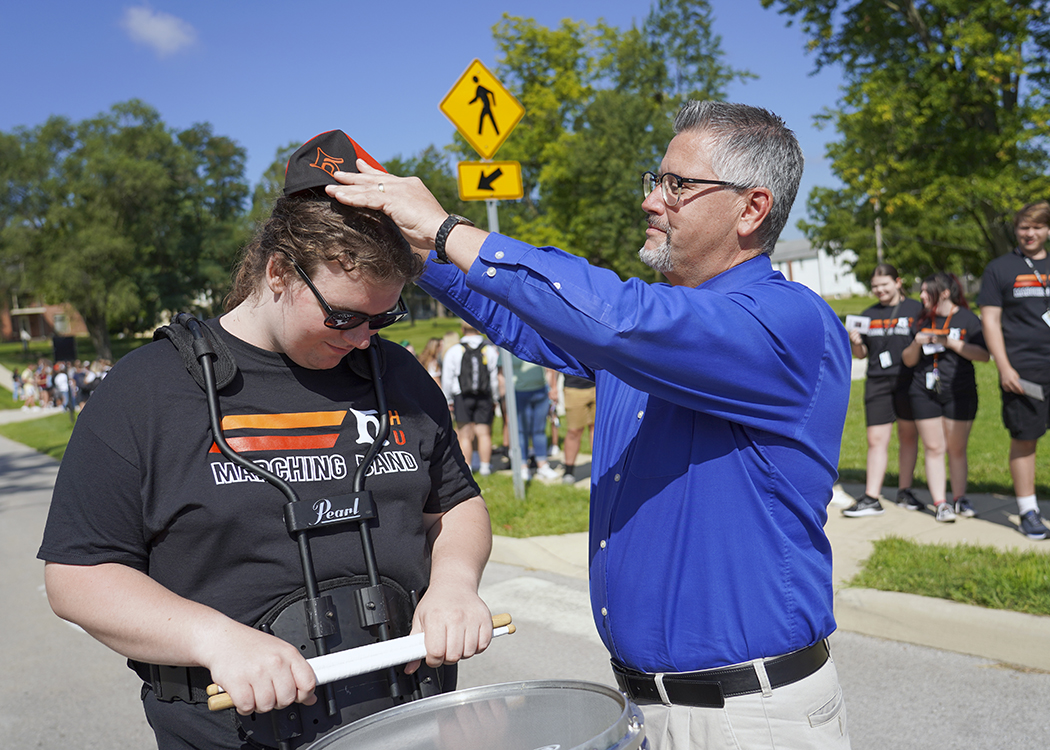 She explained the old use of the beanie, and the importance of carrying on, and making personal, traditions. While not every tradition, like the beanie or T Bridge, are exactly the same, by changing those traditions to suit the participants, we knit closer the networking family of Heidelberg.

Among those traditions, came the singing of “Sweet Alma Home.” Those students hearing it for the first time were engaged by the bell-like chorus, conducted by Dr. Greg Ramsdell. As the last tones rang out, the students left Seiberling, to be cheered on from either side by the loving faculty who will be guiding them for the next four years.

Welcome to your Sweet Alma Home.