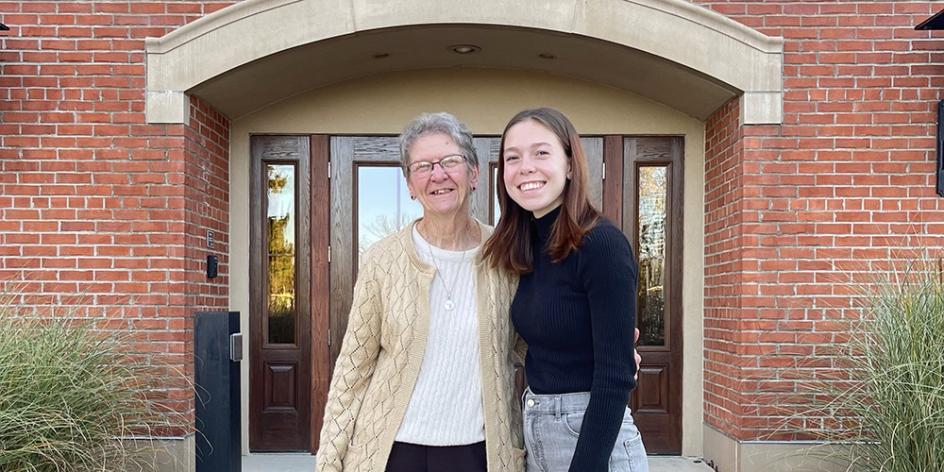 In films, on TV and even on greeting cards, nuns are invariably stereotyped as caricatures, depicted as either mean, crabby or sanctimonious. Students in Dr. Desi Matherly’s Writing for Social Change class found out that those stereotypes couldn’t be further from the truth in a class project that just concluded last week.

“I really had no expectations because we didn’t know how this would evolve and what it would become,” Desi said. “The students were in the dark too, but it became something greater.”

The “something greater” was the class’s project to collect and transcribe oral histories from a dozen Sisters of St. Francis at their convent on the south side of Tiffin. The project came to light at the urging of Denise Bowerman, RN, the director of Congregational Wellness at St. Francis.

“We just recognized that these women have a legacy to share,” Denise said. “Their entire lives have been to serve their fellow man, selflessly and faithfully. Each of them has a remarkable story of serving the poor, imprisoned, hungry, lonely, etc. You can’t help but be inspired.”

And that’s exactly the reaction the students had.

A source of inspiration

Four students -- seniors Isabel Chasney, Julia Schaefer and Carolyn Schutte and junior Emma Wright – stepped up as project coordinators. Together, they organized, scheduled and conducted interviews during multiple visits to the convent, and collected the class’s work in a shared Google drive. Isabel, Julia and Carolyn conducted interviews, which focused on the sisters’ activism, personal histories, history of the convent and how it has changed, among other topics.

“My favorite question was about the advice (the Sisters) would have for people my age,” Julia said. “Their message was to get out and see the world and experience it from a different perspective.”

Emma managed the huge job of transcriptions. Beyond that, the class members signed up for roles for which they felt comfortable. For example, senior Aaron McCoy photographed some of the interviews as well as the gorgeous and peaceful St. Francis grounds.

What remains, for now, is some of the transcriptions, but Desi hopes the project isn’t over. “You’ve begun something important,” she told her 16 students as they debriefed at the end of the semester.

For Isabel, the project brought some surprises. “The Sisters were so kind and wonderful. I will remember that for a long time,” she said. “What a large and impactful community we have right here that I didn’t even know about. (The experience) was a lot cooler than I maybe thought.”

The Sisters’ interests are diverse; theirs are stories that need to be preserved. Indeed, they have quietly and devotedly made a huge impact in their chosen areas of social justice. For example, the Sisters singlehandedly integrated Lourdes Hospital in Paducah, Kentucky in 1959, integrating newborn babies of color with those in an all-white unit. It was a controversial and courageous commitment, but the sisters stood their ground. Decades later, in the 1980s at the beginning of the AIDS epidemic when many people feared those diagnosed with AIDS, Sister Janet Hay did ground-breaking work with local AIDS patients, ministering to them and creating a support group where they were welcomed and never judged. More recently, the Sisters were instrumental in creating and operating Sisters in Shelter in Tiffin. SIS provides education and awareness about human trafficking as well as critical needs for women survivors. The agency and its current director, Sister Mary Kuhlman, have frequently hosted ’Berg student interns, some of whom have stayed on as staff members.

The Sisters may have been equally inspired by the ’Berg students they encountered throughout the project. It seems the experience was mutually enjoyable.

Lily Roth was already familiar with the Sisters and the convent, having served an internship last spring with their Franciscan Earth Literacy Center. “What surprised me most is how inspired they are by our generation … how we learn and adapt to things.

“They have an openness and acceptance of our generation,” said Lily, a senior integrated media major who plans to return for their second internship next semester, this time in marketing.

The ’Berg students brought their own joy to the convent. “I had many Sisters say how these students impacted them,” said Denise, the St. Francis administrator. “They voiced how delightful it was just to be around them and interact with them. I think actually, the interviews were as impactful for the Sisters as they were for the students.”

Getting re-engaged with Heidelberg

For one of the Sisters, involvement in the project was especially wonderful. Sister Maggie Slowick served as Heidelberg’s campus minister from 1991-2003 – “some of the best years of my life.” So she jumped at the chance to re-engage with Heidelberg students, this time for a very different reason.

Sister Maggie – whose work and passion is in ministering to children in a poor village in Cuernavaca, Mexico – was interviewed by senior Carolyn.

“I thoroughly enjoyed my interview with Carolyn,” she wrote while on retreat in her native Connecticut. “She has a deep commitment to making the world a better place and that gives me hope. … The other Sisters I talked to felt the same about the students who interviewed them.”

Where the project goes from here

It’s important to Sister Maggie to tell the stories of “some remarkable women who have been groundbreakers in addressing major issues of social justice.”

Telling their stories is the essence of the collaboration. “This project will preserve the legacy the Sisters live,” Denise said. The digital recordings and transcriptions the students created will be kept in the convent archives. Eventually, they will become part of a regional collaborative archive center with national access, documenting how Catholic Sisters have served society by living the Gospel of our times, she added. The stories will be shared across the generations and will be included in publications of the St. Francis magazine.

Sister Maggie has a simple message to convey: “If you are on this Earth, you have a calling. There is something meaningful and important for you to do. Take the time to listen to your deepest self and follow your heart.”