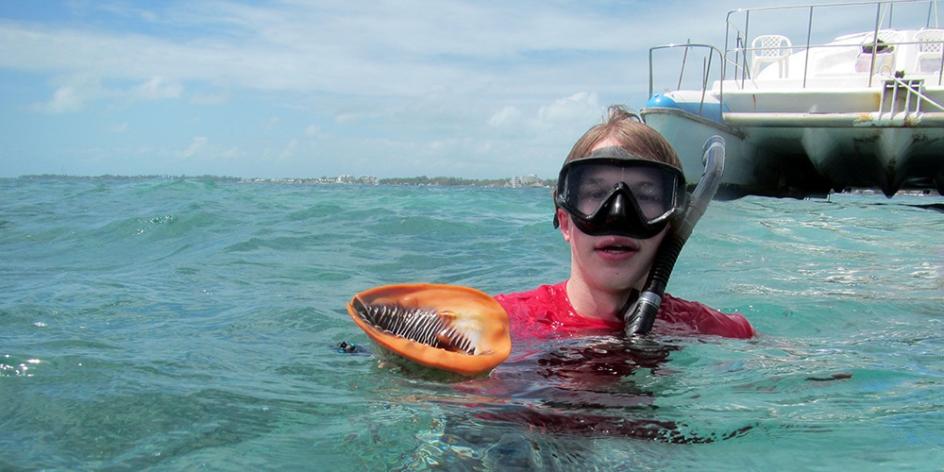 Six students are spending their spring break in San Pedro, Belize, Central America, together with their professor, Dr. Amy Berger. This week-long trip is the primary component for their class “Caribbean Biogeography.” While there, the students are investigating the northern hemisphere’s largest barrier reef system. They will also have an opportunity to see coastal and jungle environments. Follow the students’ experiences, in their own words. 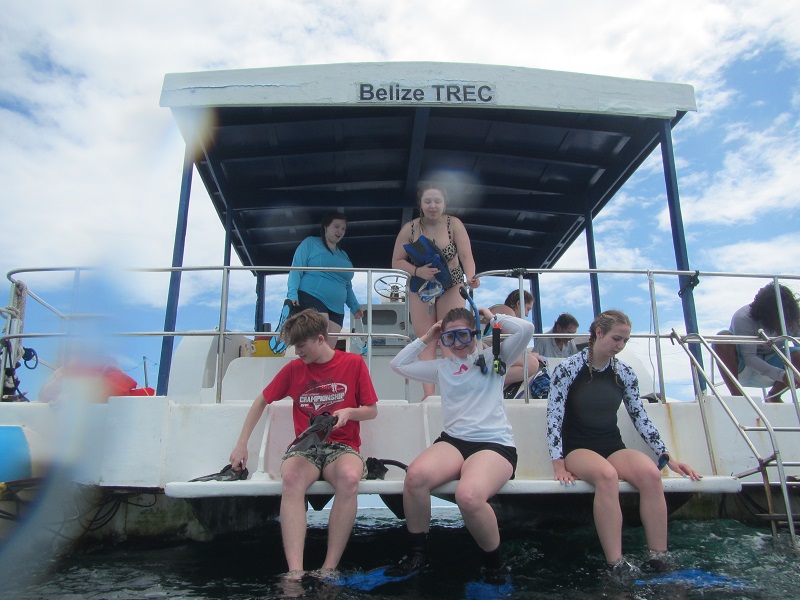 On the first day in Belize, the Heidelberg gang took on the second largest barrier reef in the world, the Belize Barrier Reef. Since it was the first day out, we kept to the shallow back reef; our first snorkel spot was called Pillar Coral reef.

When entering the water, we saw lots of turtle grass, as well as finger coral. In our hour-plus snorkel, we got to see sting rays, and LOTS of different fish species. When we got back onto Goliath (our boat), we went to our second snorkel spot: Tres Cocos. Here we were super close to a nurse shark, an eel and grunts that were schooling under the coral, resting waiting for night's hunt.

This was such an amazing and exciting experience, getting to see all these creatures soaking up the sun, so it was worth the long day of travel the day before. 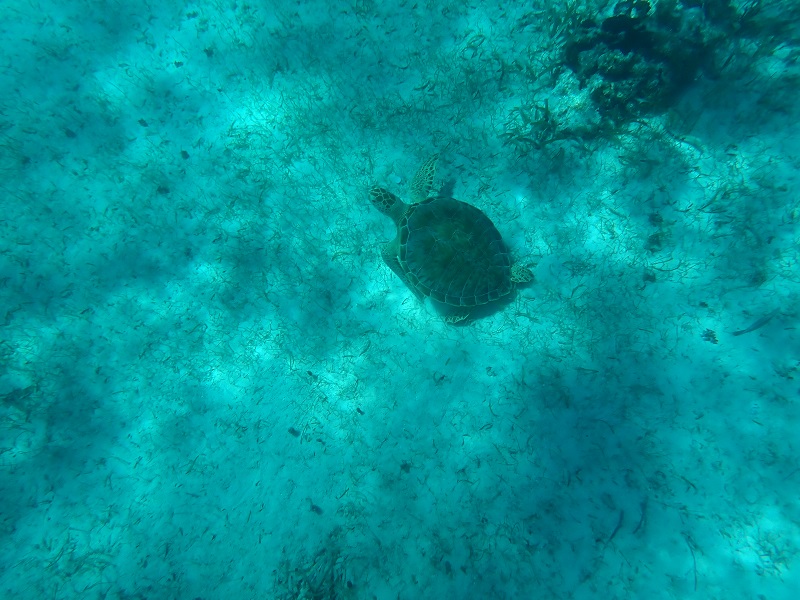 This morning we had to wake up early so we could get a head start to our day. After having a great breakfast made by Maggie, we were down at the boat and headed off to our first location, Coral Garden. Unlike the first day, this snorkeling spot was much deeper which put our snorkeling skills to the test.

Upon arriving at the popular Coral Garden, we heard someone who wasn't enjoying the water like we were (they were violently throwing up)! At this spot we saw many different species of fish and sea turtles that we couldn't see at our first location. After we finished snorkeling at Coral Garden we headed to the Mangrove Tree Islands, accompanied by dolphins.

At the mangrove islands, we had to snorkel carefully to not disturb the sediments at the bottom so we could see all the fish, especially the funny-looking batfish which lives at the bottom and has bright red lips. After getting a chance to see the schools of fish, jellyfish, and spearing a few invasive lionfish, we called it a day and headed back to TREC. We ended the day celebrating a birthday with fried chicken and tres leches cake made by Maggie. 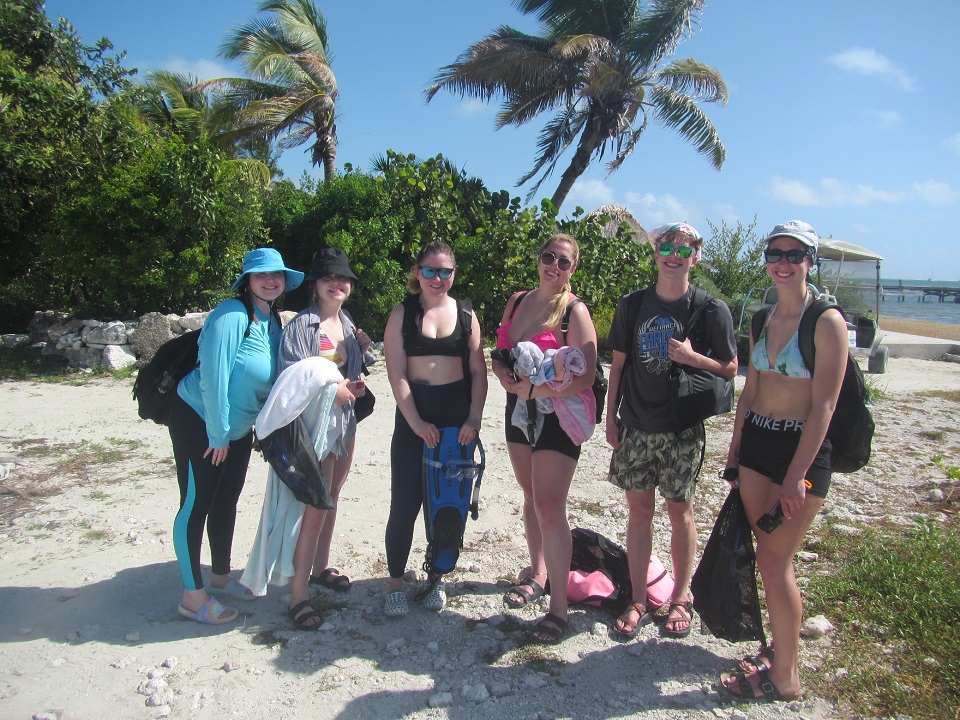 We started off the day with fresh fruit, sleepy eyes, and excitement for the day's itinerary. After being given the heads -up it would be a long day, we began strategically braiding hair and globbing on sunscreen. After about an hour-long boat ride and some good music, we got to Mexico Rocks to start our exploration. We saw squid, pufferfish, huge lobsters, and a barracuda that Carlos, our field guide, threw a watch toward to draw it in. Little did we know this would not be the only heart attack we had this day.

After seeing magical creatures at this location we took a short boat ride to an underwater cave. The pressure of this water was intense as we dove down to look inside; however, our daring guide Carlos yet again showed off his skills. He not only held his breath for what seemed like several minutes, but was also able to take a video of the inside of the cave for us. He showed us a giant monster of a lobster that hid in the dark as well as the 3+ foot schools of fish that lived there as well. We finished this trip with some of TRECs personal chef's tuna salad, which crushed all our cravings yet again.

Our next location was a “buddy” snorkel that allowed us to explore a new area of reef with one other person. We all love these trips because it’s a lot of freedom and you can take your own time to look and explore whatever you desire. My buddy and I found a ton of pleasure in fan worms, which are pretty flower-looking organisms that close and tuck in if you get too close. We also made friends with a few fish that were just as interested in us as we were them.

Our next excursion was a night snorkeling trip that showed us just how different sea life is at night. We held pufferfish and saw large lobsters and crabs. Of course, my favorite was the octopus. The cute little guy was fun at first, but quickly attached and covered my goggles in the middle of the pitch-black ocean, and left my buddy and me very triggered. He did not come off for a decent chunk of time and after leaving me blind, he finally clung to my arm and enjoyed the rest of the excursion with us. We saw what looked like fireflies while kicking up sediment with all flashlights off, which were bioluminescent dinoflagellates.

We ended the night with tears of laughter on the boat, joking about all the craziness from the day. Today is one we will never forget, and I hope a day the octopus will remember too. 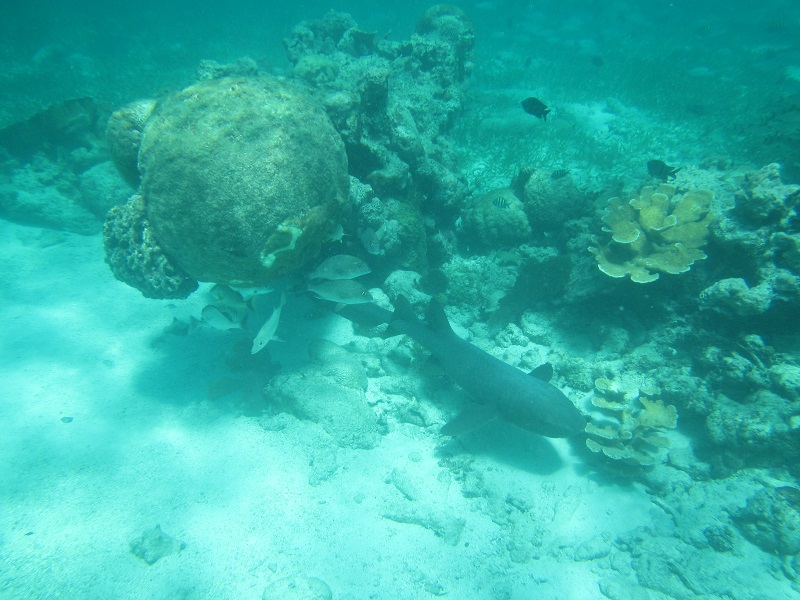 We all woke up this morning with small hint as to our itinerary for the day. We got all of our things gathered up and ready for the boat ride out to the Hol Chan Marine Reserve, where our first stop was called Shark-Ray Alley. As soon as we stopped the boat, we had a bunch of big nurse sharks off the side of the boat and we were told to just jump right in! It was scary and exciting all at the same time, being within arm’s distance of these amazing creatures and not being in a cage or anything. We got to swim with the sharks and then explore the reef around us with fish that would come so close you could almost touch them. We also saw many sea turtles that were so friendly and beautiful to observe.

Our second stop was also in the Hol Chan Marine Reserve and we got to explore a deeper section of the reef, where we saw a Moray Eel, grouper, jacks, parrotfish, and lots of other fish and beautiful corals. Our day out on the boat was shorter than the rest of the days but we all had so much fun and only got just a little more burnt than we were already. But are enjoying every second in this beautiful country! 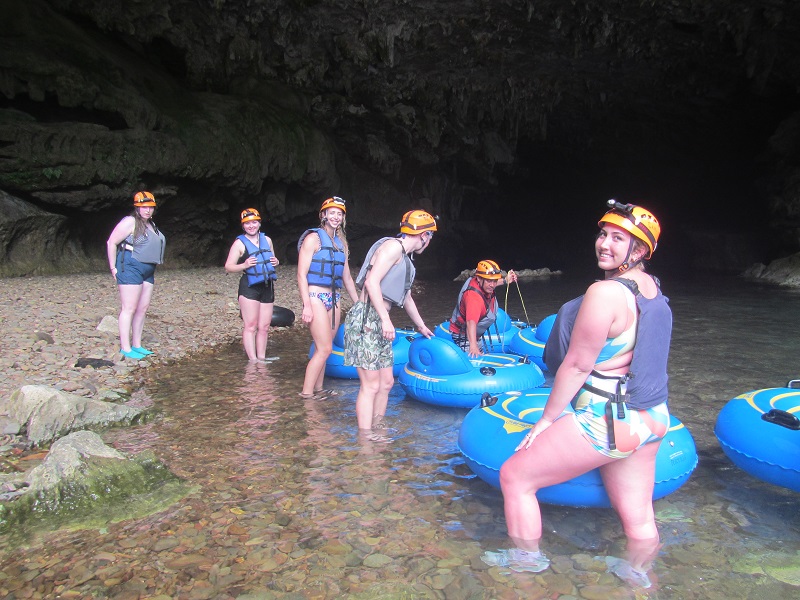 For today’s journey, we had a different and new start. We all got up pretty early to head to a speed boat at the end of the dock next to the one we had used previously all week. It took about an hour or so to arrive at the Mainland. After getting off the boat we had a short drive to the Belize Zoo.

At the zoo we saw a ton of new animals such as spider monkeys, howler monkeys, puma, jaguars and even the famous Belize Toucan bird – all of which were incredible to see up close and in person. There was one animal that I was not expecting to see at the exhibit, which was the white-tailed deer. It was very unexpected but it was neat to see how Belizeans react toward them.

After the zoo, our class headed to the next destination of our day trip: a short ride to the cave tubing. During this time, we changed into our swim gear, put on our sunscreen and headed toward the water.

We had about a 30-minute walk to get to the entrance of the cave. When we arrived at the cave we all were in awe at its beauty. We learned so much about the history of the cave and how it was formed. It was really relaxing to sit back and listen to all the stories the cave has endured throughout millions of years. Another really cool thing about the trip was that the cave was very huge and had different levels to it. The water had paved a way through the cave, which made it possible for us to travel through. Xibalba is the Maya word for “underworld,” and this cave that we visited was part of it.

To finish off the night, we had a great dinner made by the great Maggie here at the Marine Trec and then, some of us headed out to the town to have some fun before our next adventure. 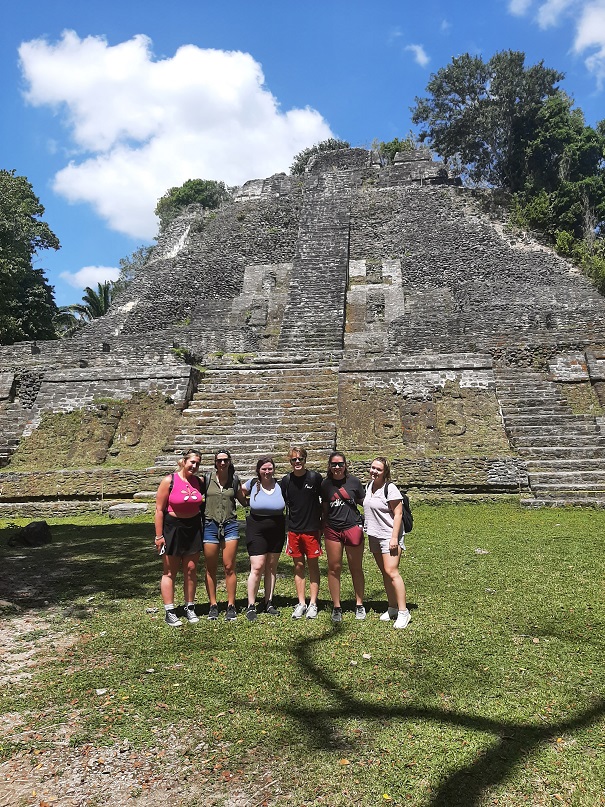 We rounded out the last leg of our trip with a day at the Maya ruins north of Belize City. We took a speed boat across the ocean to the mainland and as always, the water was a vibrant turquoise blue. The waves made for a pretty bumpy ride, but we arrived at a seaside hotel then took a van out into the country to get on another boat. This boat took us along a beautiful river where we stopped along the way, learning about birds, animals and plant species. Our guide, Eddie, was incredibly knowledgeable and gave us great insight in some of the history of the use of certain vegetation lining the river. One of my favorite facts was that a certain tree called the pimento palm tree has seeds that locals say if you boil and drink the tea, it can be used as a cure for appendicitis. So cool!

We finally reached Lamanai and were greeted by the magnificent Jaguar Temple. We were able to climb to the top and overlook the beautiful landscape below. Eddie explained to us how the temples were painted and used for religious ceremonies from hundreds to thousands of years ago. We later saw the High Temple, which is over 200 feet above sea level and breaks through the jungle canopy to overlook the lagoon below.

The Mask Temple was especially cool because it had faces on the sides that made for some great pictures. The temples were all in the center of a lush jungle, which we found out was home to howler monkeys that we had the privilege of seeing during our time there. We ate a delicious and authentic Belizean lunch of chicken and rice and beans and departed from the archeological site. The ruins were well worth the trip as we hadn’t seen such amazing history before.

We all laughed, shared stories and reminisced about the week during the travel to and from. One of the main things we all agreed about was how grateful we all were for this experience and that it will be a lasting memory all of us will cherish forever. I couldn’t have asked for a better group to spend a week abroad with and will always hold this island and country close to my heart.