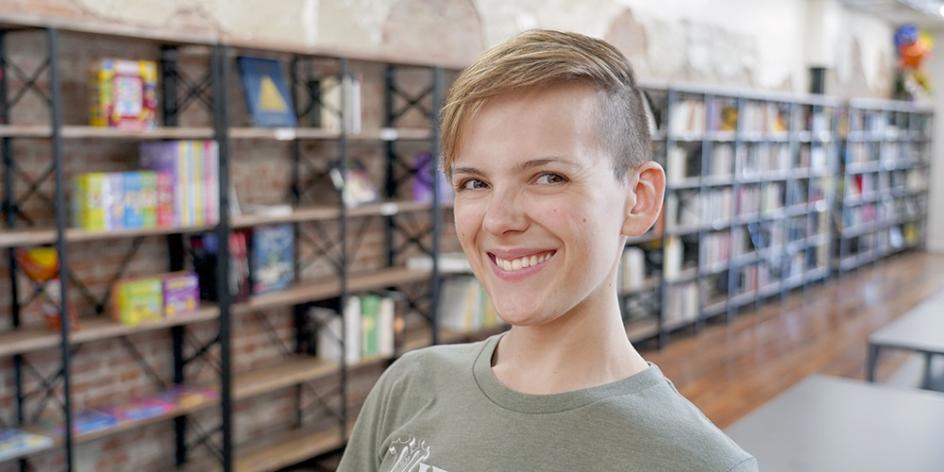 Independent bookstores may feel like a dying breed, but not in downtown Tiffin – not since Judy Smith ’20 took a leap of faith and opened her very first business, the newly renovated Pan Yan Bookstore, earlier this month.

She’s super proud to be part of the downtown revitalization efforts and even more proud to offer a new business that brings a sense of community when it’s needed most.

After graduation, Judy spent a semester in a Ph.D. program at the University of Toledo. But at the end of the semester, she knew her calling was elsewhere. “I knew I always wanted to open a business. I just thought I’d do it when I retired,” she says. “I thought I’d have a ‘real career’ first.”

After she left grad school and broke the news to her entrepreneur parents, she headed back to familiar territory – Heidelberg’s National Center for Water Quality Research, where she had worked as an undergrad for three years. Today, she balances a full-time position as a model and data analyst for the NCWQR and her passion – operating her new bookstore.

Since March of 2021, it’s been a labor of love that hasn’t been without its challenges. The first hurdle: financing. But Judy’s connections in town which she established as a volunteer during her undergrad days paid off.

“I’m grateful that Croghan Colonial Bank believed in what I was doing and gave me the loan,” she said. “It was totally unexpected.”

Next obstacle: Finding a suitable location. She hit the jackpot with a centrally located vacant shop a short walk from Heidelberg’s campus. The only problem was that it needed a complete renovation. But Judy and her team weren’t going to let that spoil her dream. Renovations began months earlier by the Reineke family, who was integral to the project; Judy took over the renovations in April. The grand opening was held on September 8.

In hindsight, it’s remarkable that the project came together so quickly. Judy experienced COVID-created material shortages; but with the help and support of her boyfriend, Sean, her parents, Steve and Rita, who traveled 3 hours to Tiffin from their home in Galesburg, Michigan, nearly every weekend to help, and a corps of friends and family volunteers, she never let up. Renovations included removing 7 layers of paint followed by applying 3 layers of sealant to the beautiful exposed brick walls that make the space rustic and homey. Additionally, Judy’s team had to clean the entire drop ceiling, install ceiling tiles, clean the floors “about a million times” and building furniture such as tables and benches, bookshelves and the service counter.

In the three weeks since the store opened, community response has been awesome.

“Absolutely fantastic,” Judy says. “People have come in and commented that they love the feel of the store … that it feels so cozy.”

What started as a couple of pop-up shops for early name recognition has blossomed into a new community hangout that’s full of promise and possibilities.

Judy has already begun to participate in the many downtown activities – events such as the Seneca County Young Professionals Pizza Party, trivia nights, the upcoming Pumpkin Stroll and Downtown Trick or Treat. among others. On September 30, she’s hosting the HU Gaming Club and is in the planning stages for a fundraising event with live music.

“I’m super excited, especially since I’ve been on the other end of it as a volunteer on the Business Enhancement Committee,” she says.

Because Pan Yan is located in a DORA district, patrons are encouraged to bring in a beverage, carry in food or order in or local delivery at the bookstore.

“I couldn’t have done this anywhere else but Tiffin,” she says.

Despite the growth in online book buying, Judy believes her shop will be a success because people are craving what a physical store can offer: a sense of community. “People can still get books from Amazon, but I think independent bookstores are making a comeback, especially after COVID.”

Judging by the reception for this new downtown Tiffin enterprise, she may just be right.

“The customers being excited makes me excited,” she says. “Sure, there’s a risk involved in opening any business. There’s also the possibility I’ll fail. But all of that gives me the motivation to try harder.”

Pan Yan is rapidly becoming a melting pot of all generations and all backgrounds, and that’s definitely lacking today, she believes.

Down the road, Judy expects the shelves to be fuller. But her greatest hope is that the store will be an attractive hangout for students of all ages, especially those from the ’Berg.

“I hope to be the draw for bringing people together, and especially for getting young people and college students downtown.”

There were literally hundreds of hours of sweat equity poured into the renovations for Pan Yan by family and friends – and Judy herself. She learned a ton of new skills along the way, including how to use power tools.

“The first time I picked up a power tool was during the Blitz Build my junior year,” she recalls. Blitz Build is a part of Heidelberg’s HYPE Career Ready Common Experience. The entire junior class rallies together at the beginning of the school year to build dozens of walls for local Habitat for Humanities homes. And that’s where it all began.

So where did the name Pan Yan come from? Back in 1817, a local watering hole, the Pan Yan Tavern, was built in Tiffin. The name is a nod to that bit of local history. There’s no connection to a former downtown eatery by the same name.