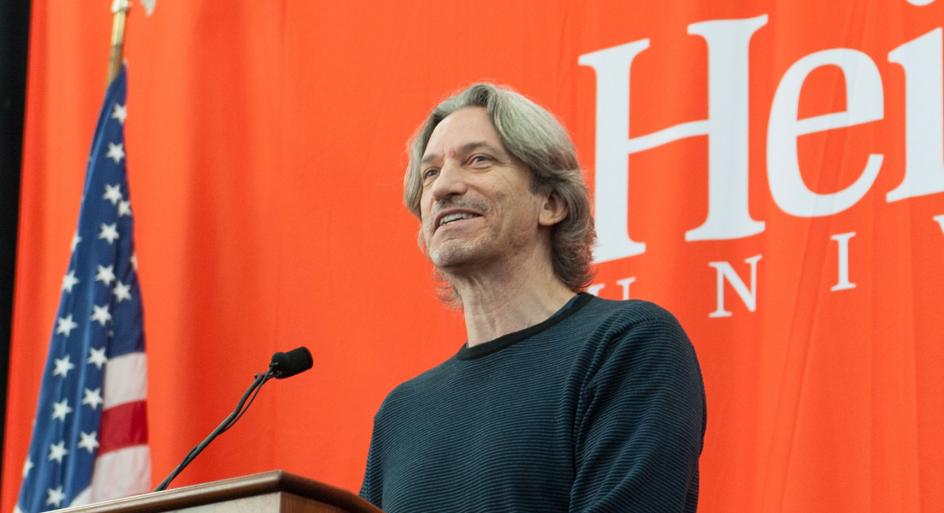 Human rights advocate and best-selling author John Prendergast followed his heart in his lifelong quest to make a difference for war-ravaged nations in Africa. Turns out he also inspired Heidelberg students as he spoke about his commitment to improve the world.

Students came away encouraged about Prendergast’s message to choose to be “upstanders” instead of bystanders.

"I feel very inspired by what he said. It makes me want to step outside my comfort zone and believe I can affect somebody’s life and make it better," said freshman Allison Schwarzbek.

Prendergast was on campus Wednesday as the keynote speaker for the co-curricular HYPE Program. As an activist, he has focused on securing peace and ending genocide and crimes against humanity in African nations for over 30 years. During his keynote, he wove together his personal experiences with a series of stories of serendipity – being in the right place at the right time, meeting influential people who he rallied to join his causes and help him make a difference.

These social movements, more than anything else, have changed the course of U.S. history.

When people band together to say, ‘Hey, this is wrong and I want to do something about it,’ that really has altered this country.

As an upperclassman, junior Kevin Scrudders chose to attend Prendergast’s keynote and also workshop sessions that followed. He said he was struck by Prendergast’s drive and commitment. “He found his cause and he directed his life toward it,” Kevin said.

Understanding that massive change might not occur overnight, Kevin took away the principle that committing wholly to a cause will result in some degree of impact.

At the end of the day, you can make a contribution when you make that step and work toward your goal.

The second of six HYPE Days this academic year focused on the theme of values. Freshman Hanah Ralston said she learned the importance of seizing opportunities whenever they come and understanding that the benefit may be in the present and in the future. "If you focus not just on now but on how (opportunities) will be beneficial in the future, maybe more opportunities will come your way," she said.

Prendergast’s message about taking chances and choosing causes for which we’re passionate held meaning for some grown-ups in the audience as well. Sondra Libman, a ’67 alumna, is on campus for this weekend’s fall Board of Trustees meetings. She said she was inspired by the ways Prendergast unexpectedly found joy in his life.

"You never know the people you’re going to meet who will open up horizons for you," Sondra said. “You need to keep your eyes open,” said Sondra, who is chair of the Board of Trustees. “This man found something he believed in very early and he committed to it.”

Prendergast concluded his keynote with this advice for students: “You never know the impact you can have on a human life. We’re all constantly faced with choices to be bystanders or ”upstanders.”

If each of us chooses to be an ‘upstander,’ I believe we can change the course of history on the things we really care about.

- See photos from the day or check out #BergHYPE!