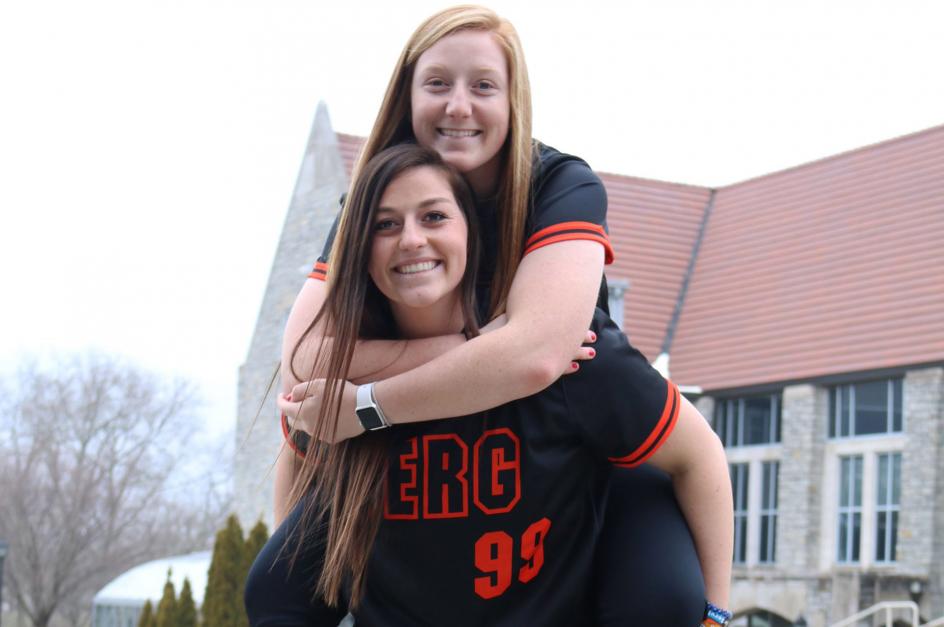 A bond between teammates is strong, but a bond between sisters is something far greater. Heidelberg University senior softball players Kaitlyn and Casey Moore have seen their relationship as sisters guide them throughout life in multiple ways.

Born exactly 11 months apart (down to the minute!), Kaitlyn and Casey have always had a close connection with each other. Dating back to their childhood, older sister Kaitlyn could not begin preschool without her younger sister Casey, so she started school a year later.

"She started school early, and I started school late," Kaitlyn said. "If we didn't do it like that, Casey would be a sophomore and I'd be a senior right now."

Fast forward to their college search. It was Casey who wasn't ready to leave Kaitlyn and go separate ways quite yet. As their search unfolded, the two had thought they were decided on a college until their father, Paul, urged them to take one more visit at Heidelberg -- a school they had not yet considered, and a team they thought was too good for them at the time after having just reached the NCAA Super Regionals.

Since arriving on campus in the Fall of 2016, Kaitlyn and Casey have both immersed themselves in Heidelberg's culture by expanding  their involvement on campus.

Kaitlyn, an athletic training major, has logged over 1,500 hours of clinical time, worked in Heidelberg's cadaver lab, taken leadership roles on the Student-Athlete Advisory Committee (SAAC), Athletic Training Group and Campus Crusade for Life (CRU), and has earned All-Ohio Athletic Conference accolades on the softball field. Casey, a criminology major, has worked a full-time internship with the Seneca County Drug Task Force, served on the advisory board for SAAC, and has also been an All-OAC performer on the field.

Though extracurricular activities seem to be at the forefront of their college lifestyles, both Kaitlyn and Casey have proven themselves as excellent students in the classroom.

"We had a rule in high school that Dad would always tell us that if we brought home a C, we couldn't play sports," said Kaitlyn. "We thought we were off the hook when we went to college, but the rule still follows us."

Adhering to their father's guidelines, both sisters have pushed to be the best they can be in the classroom so they can remain eligible to play softball -- by Heidelberg's standards and in their father's eyes. To showcase their work in the classroom, Kaitlyn and Casey have both been awarded Academic All-OAC honors each of the years they have been eligible.

"Academics are important to me, so I have to work hard for my grades," said Casey. "But I'm OK with getting a B, while Kaitlyn will work that much harder for an A over a B."

On the field, their sisterhood has helped to escalate their level of competitiveness. As both Kaitlyn and Casey have inked their names into the 'Berg career record books, they have a sense of pride on the line within their family about who finishes higher on the list. In the Moore family, their favorite part of the game is to hit, so the trek up the career home run list is at the center of attention for their intra-family feud.

"There were times Kaitlyn would hit a home run and come into the dugout and yell 'One up on you, Sis'," said Casey. "But then I would hit one and come back and yell 'Even, Sis', so you can say the competitiveness between us is definitely there."

Kaitlyn -- who stands at 14 career homers -- got behind Casey's 17 home runs this past season as an off-season ACL injury limited her playing time and plate appearances during the 2019 season.

However, after battling through long hours of rehab, Kaitlyn found a way back to the field in 2019. Back in the fold, she managed to break the career record for most strikeouts as a pitcher and stayed within striking distance of Casey's home run total.

As the sisters get ready to depart for their final Spring Break trip to Florida with the softball team, they are prepared to take their next steps after the season's conclusion, but not without hesitation.

As Kaitlyn plans to pursue an athletic training graduate assistantship, Casey intends to remain at Heidelberg for the PlusOneAdvantage® MBA program and then attend the police academy after graduation.

"Honestly, I don't know how it's going to go," Kaitlyn said. "It'll be the first time we're away from each other, but I guess we won't know until we try it."

As their time as roommates and teammates comes to a close, their time as sisters will continue to keep them close in every facet of life beyond their collegiate careers.