Sports journalist: Be ready when your dreams happen 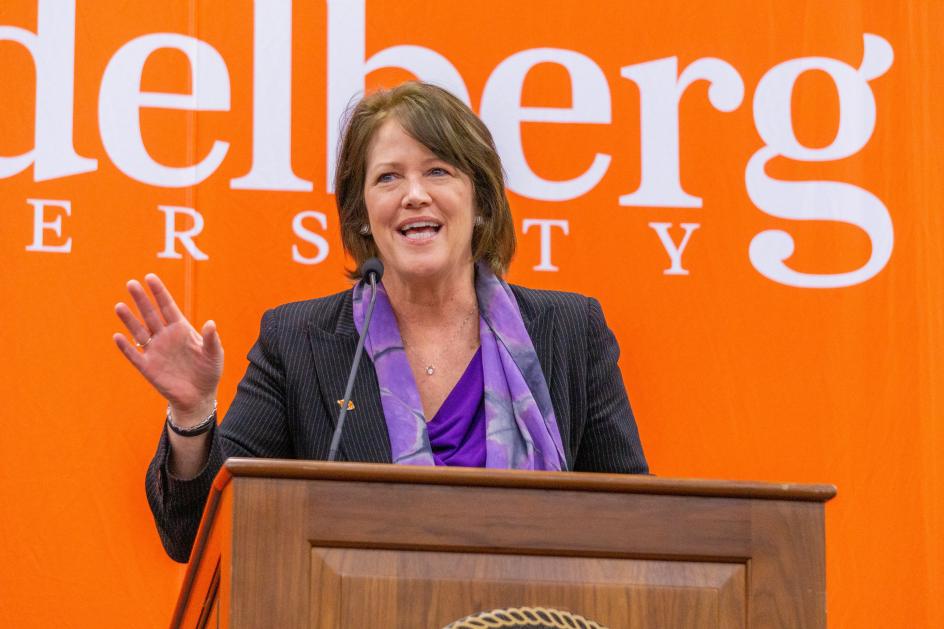 She’s tall and definitely doesn’t throw like a girl. Trailblazing sports journalist Christine Brennan had always played sports, even though it wasn’t encouraged, or even routinely available, to most girls prior to Title IX.

“I loved to go to sporting events, play sports, but the key for me was watching sports on TV,” said Brennan, who also used to type up pre-game stories in her own little press box in her home. Perhaps that was the precursor to what has become an award-winning national sports columnist.

Brennan, a columnist for USA Today, was on campus Tuesday as the keynote speaker for the fifth HYPE Career Ready® Day.

When it came time to think about a career, Brennan, a six-sport athlete who grew up in Toledo, aspired to be a journalist, but initially a political journalist – because there were no role models who were sports journalists.

“There were no women with bylines. I never saw a woman do sports on TV. I just didn’t see it. I’m the biggest girl jock in northwest Ohio and yet, I don’t even think I can be a sports journalist,” she recalled.

But that didn’t dissuade her. “When I was starting to think about what am I going to be, I had some crazy dreams,” Brennan said. “But if I’d have said I wanted to be a sports writer, I would have been laughed out of the room.”

However, she believed – and her parents fully supported – the notion that anything is possible. As long as there’s a passion, there’s a way. Nothing is ridiculous. So she powered through.

“It’s a crazy idea to do something that no one who looks like you does, but you have to follow that dream. If you want to make it a career, yes, you can. It would be a shame if you didn’t follow your path,” she told the students.

Brennan headed for Northwestern University and earned a bachelor’s and a master’s degree, and then launched her career as the first woman writer at The Miami Herald in 1981 and the first woman to cover the NFL’s Washington Redskins as a staff writer for The Washington Post. Today, she is a leading voice on some of the most important issues in sports, in addition to contributing to ABC News, PBS, CNN and NPR. Additionally, she’s covered major athletes (Koby Bryant, Tiger Woods), teams (World Cup-award winning women’s soccer) and issues (Augusta National Golf Club female membership, Olympics figure skating scandal, Olympics Russian judging scandal). Her 1996 best seller Inside Edge, one of seven books she’s authored, was one of the top 100 sports books of all-time as rated by Sports Illustrated.

Title IX, which was signed into law into 1972, leveled the playing field for women athletes. According to Brennan, the law changed the landscape for girls and women.

“Before, if you saw a girl on the field, she was there to tell her brother it was time to come home for dinner. But now, when you see a women’s team on a field, you don’t give it a second thought,” she said. “When I think of how things have changed (since Title IX passed), I think it’s made us stronger people.”

“Whatever you’re going to be in life … a mom, a doctor, a lawyer, a teacher, a coach … you will be better at it because you played sports,” she said.

“(Embrace) the possibility of your dreams. You don’t know where or when it’s going to happen for you, but be ready for it when it does. Follow that passion.”